In this interview, Paul Smith talks to Alexander “The Engineer” Lim, host of AuthorStory by alvinwriter.com, about his book, The 10 Stories Great Leaders Tell.

Paul remarks that his working career was typical, in that he took a job with large corporations such as Accenture and Proctor and Gamble after graduating from college with a bachelor’s degree in economics, after which he got a master’s degree in business. He got involved with storytelling when he realized that storytelling was something which leaders should have, thanks to the leaders he admired while he was in Proctor and Gamble. “They didn’t teach me that [storytelling] in undergrad, they didn’t teach me that in business school,” he remarks about his frustration when figuring out what storytelling was all about. He thus set out on his own to explore the realm of storytelling, which is how he is where he now is, as a storyteller.

For Paul, storytelling is “telling a story about something that happened to someone.” A story is thus not a speech, a presentation or a memo with bullet points, but a narrative that has a time, place, a main character that has a goal, an obstacle in the way of getting to that goal, events that take place along the way and an ending with a resolution. Paul notes that there are eight questions that a good story must answer, and these are:


Paul remarks that all stories share the same common traits; that said, in business stories, the audience is the one who needs to summarize what is learned and figure out the next steps to be taken. Storytelling is becoming popular as a means of communication within businesses because it works at getting people to think and feel what it is that needs to be done, according to him, and this is because stories communicate with both the logical/rational and the emotional parts of the brain. A list of reasons, on the other hand, only communicates with the logical/rational part of the brain, which makes this method fall short, as Paul notes that human decisions are made in the subconscious, emotional part of the brain, after which these decisions are rationalized. He also notes that facts and data are between six and 22 times more likely to be remembered if these are told within a story compared to if these were merely given as a list, which makes these facts more likely to be acted upon.

Paul mentioned that, in the three books he wrote prior to The 10 Stories Great Leaders Tell, he covered some 70 different types of stories and 250 examples of these types of stories. He was thus often asked: “What are the most important ones?” and he would give different answers each time. He decided to narrow his focus on a particular type of story when a publisher contacted him to write a book which could be read in an hour’s time, and he chose the field of leadership because several of his clients, who are leaders in their respective fields, ask him how to tell stories which could help them with their work.

The ten kinds of stories great leaders tell, according to Paul, are: 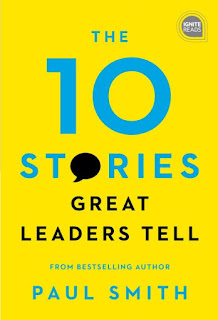 Paul gave, as an example, a personal leadership philosophy story of Mike Figliuolo, who was a West Point graduate who was assigned to lead a platoon of tanks. In one of his first training exercises, despite the planning that had been done beforehand, he found himself in a situation where he was leading a force of 400 tanks against an opposing force of 400 tanks and had to pick a direction at a time where he was somewhat confused. Mike could have spent thirty seconds stopping where he was and studying his map to figure out what to do - which is a long time, given that the opposing force was likewise looking for him so they could “kill” him and the tanks he was leading. Mike made a decision on the fly to head in one direction, and within seconds of doing so, he and his entire platoon were taken out. The tanks behind him, however, saw what happened and turned in the other, correct direction, subsequently took the high ground and, in the end, won the exercise. The lesson Mike learned was that it is sometimes better to make the wrong decision quickly than the right decision slowly; and since life gives quick feedback on whether the decision taken is right or wrong, provided one doesn’t get killed by it, one can adjust and figure out what to do next, rather than get stuck in analysis paralysis. This explains why Mike is a quick, decisive leader who forgives his people for making mistakes, so long as they learn from it.

Paul notes that leaders have a difficult time telling strategy and vision stories because they don’t know the difference between a strategy document or a vision statement from a strategy or vision story. He remarks that a story for these would run along the likes of what it would be like for someone to work in a company once the latter has achieved the vision, and that, if the story is attractive enough, people will want to pitch in to achieve that vision. The founding story of the company, on the other hand, is the kind of story that leaders find the easiest to tell, because they know it by heart, because it is the most often told and is most obviously a story. 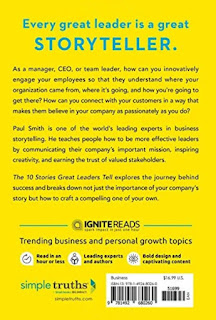 Paul recommends that people who are looking for the stories to tell need to ask for these stories from the people they work with. He recommends creating a wish list for the kinds of stories needed, and then asking around for these. He notes that, in each chapter of the book, there are guides on why such a story would be important as well as tips on how to find such stories within a company, as well as the kinds of questions to ask. He also reflects that he might want to add a “Why you want to invest in us?” story, as this is something that smaller companies need to convince people to invest in them.

Paul points out that storytelling is just one tool in one’s communication kit, and that, in general, people should be honest whenever they communicate. He also notes the popular impression is that those who tell stories effectively are natural-born storytellers, and that one is either a storyteller or not. This isn’t the case, Paul remarks, and adds that, if people want to tell stories, they should take lessons on how to do so from people who know how to do so, as storytelling is a skill on its own.

Posted by alvinwriters at 3:10 PM