Dr. Stephen G. Post on God and Love on Route 80: The Hidden Mystery of Human Connectedness

In this interview, Stephen G. Post talks to Alexander “The Engineer” Lim, host of AuthorStory by alvinwriter.com, about his book, God and Love on Route 80: The Hidden Mystery of Human Connectedness.

“If you cultivate a spiritual path, truly, no matter what difficulties arise, you will be blessed and you will be smiling.” ~Stephen G. Post 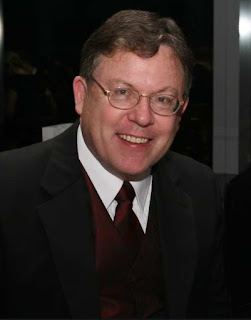 Stephen grew up on New York’s Long Island who went to an Episcopal school for high school, and had always been a good student and has always been spiritual. (The Episcopalian Church is the American version of the Anglican Church, which is, in turn, a British version of the Roman Catholic Church.) He was on the usual track for a middle-class child - school, college, then a corporate job - when, as a fifteen-year-old who was interested in spirituality, he had a vivid dream where he saw a thick, silvery-gray mist covering a road going somewhere, after which he saw, to his left, see the face of a youth with stringy blond hair, leaning out over a ledge. Stephen then saw the face of a blue angel who spoke to him in a feminine voice, saying: “If you save him, you, too, shall live.” The exact, same dream kept recurring over the next one and a half years, around a half dozen times, and he even became the “centerpiece” of a meeting on adolescent spirituality during this time. For Stephen, the dream occurred to him as being that of an Infinite Mind trying to break into his consciousness to suggest that there was something more to life than what was present materially.

Stephen applied to Reed College in Portland, Oregon, and after graduating high school he got interested tutoring some people who were living in the Bronx. His parents figured that the place was too dangerous for him to go to, so Stephen’s father got him a job in a factory cutting cardboard, and after two weeks of driving to the workplace in his father’s second-hand car, Stephen decided to drive out west after meeting with some friends, to follow his dreams. His drive west got cut short while he was in Pennsylvania, while on Route 80, after which he left a note to the Pennsylvania state police with his father’s address and then began hitchhiking west. He later called up his mother, collect, from Lincoln, Nebraska to let her know he was okay, and his mother then told him that she would call off the Pinkerton detective agency. Stephen then continued on to San Francisco to live with his cousin, George, who had, by then, spent two tours of duty in Vietnam.

Stephen spent that summer playing classical guitar and spending time at a nearby Buddhist temple. It was also towards the end of summer that he drew a bad draft number, which meant that he would be drafted into the Army unless there were some extenuating circumstances involved, such as becoming or being a college student. Stephen thus called up Reed College and asked to be accepted, which he was; and this was why he left San Francisco one September morning, with a holy Buddhist scroll in his bag which had been given, and explained about, by the temple monks. His journey took him across the Golden Gate Bridge, and despite the foggy morning, where he couldn’t see more than three feet in front of him, he felt safe enough crossing it. When he got to the middle of the bridge, he heard a sound on his left; and when he looked that way, he saw the face of a youth with stringy blond hair, a youth who looked very much like that of the youth he had been seeing in his vivid dream. Stephen then spoke to the youth, remarking that he shouldn’t jump, and the youth reacted by screaming out over the water. Stephen managed to talk the youth down, explaining his dream and how he got there. He then showed the young man the scroll he had and went over it briefly before sending the young man, Harry, to his cousin George’s home, along with the scroll and a note of introduction so he would be allowed to stay over. The two then parted ways, and Stephen then hitched rides to Reed College.

For Stephen, the dream and the encounter that it led to suggested to him that there was a connection, a oneness at a level of mind, spirit and soul between humans and the Infinite Mind, and that the entire experience was a lesson for him about the nature of love and reality.

Stephen remarks that people who aren’t part of any formal religion can refer to themselves as being spiritual, in that they have an inner sense of the Divine Presence as well as a sense of the spiritual dignity of other people. He also notes that there are people who are both religious and spiritual, as religion isn’t just about formality.

The book, Stephen notes, isn’t a memoir, but a collection of stories that highlight his experiences with synchronicity and connection with the Infinite Mind, and shared a story on synchronicity of his being in Oregon and being taken on a wild, wet-weather motorcycle ride on someone’s new Harley Davidson. Stephen was rather frazzled at the end of the two-hour ride as he walked into his dormitory’s common room, which had a pay phone installed in it. Stephen might have given his mother the number of that particular phone, but he never answered it himself, until this evening. Although it was 11pm Pacific Time, which meant it was 2am Eastern Time, Stephen, as soon as he picked up the phone, found himself speaking with his mother, who said that she had had a premonition of fear and anxiety and thought that Stephen was dead. 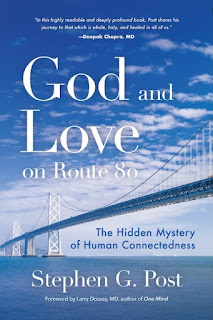 Stephen’s experiences have led him to believe that the mind is more than just brain and tissue, and that the connection with a loving, Infinite Mind allows humans, such as himself, to be guided into growing and flourishing, remarking that his life has been “a journey on Route 80.” He also claims to be a noticer, one who notices the small winks and hints of the connections between oneself and the Infinite.

God and Love on Route 80 was his first non-academic book, so he needed to learn how to write non-academically to get the book out. It sprang somewhat from the founding of the nonprofit Institute for Research on Unlimited Love. Stephen began writing out vignettes on the topic of love and what he was about, to help explain what the Institute was all about, and while he had stopped writing his vignettes for some time, he decided to write a book to pull everything together - hence the book. He also notes that the general opinion of scientists not being spiritual isn’t always true, as scientists - particularly physicists - do believe in synchronicity and a higher power.

Stephen’s favorite quote is from Eleanor Roosevelt: “The future belongs to those who believe in the beauty of their dreams.”

Purchase from Amazon: God and Love on Route 80: The Hidden Mystery of Human Connectedness by Stephen G. Post

Posted by alvinwriters at 4:51 PM