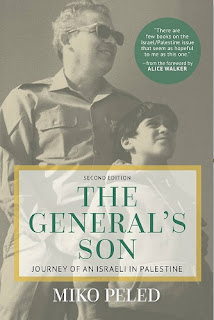 Posted by alvinwriters at 4:10 PM No comments:

Carolyn Wilman on Getting Better Winning in Sweepstakes and More


Carolyn Wilman talks to Alexander “The Engineer” Lim, host of AuthorStory by alvinwriter.com about her book, How to Win Cash, Cars, Trips & More!.


“The friends are better than the prizes.” ~Carolyn Wilman 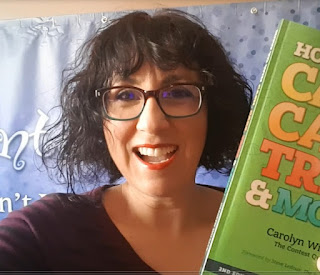 Carolyn started her hobby of entering sweepstakes as a teenager, and as an adult she pursued a career in marketing, which she still does up to this day. She only started seriously entering sweepstakes as a hobby in 2001, after reading an article about some people who did just that, and as she was unemployed at that time, due to the dot-com bubble bursting then, she decided to try it out. While she admits that attempting to live off sweepstakes earnings doesn’t work, doing so has enabled her to do things  that she wouldn’t have gone on and meet people she wouldn’t otherwise normally meet, such as the singer Sting. Carolyn also noted that she also liked meeting people in sweepstakes conventions, which are gatherings of people who like to enter sweepstakes and which, like any convention, have speakers who speak on different topics, and Carolyn remarks that she always learns something new at these conventions.

How to Win Cash, Cars, Trips & More! is actually the second edition of her original books on entering sweepstakes as a hobby, which she approached from a marketing methodology and perspective. She decided to write first editions (there were North American and Canadian versions of that book) after spotting a message on a church that inspired her to do so, and the books came out in 2004. Since then, sweepstakes methodologies had changed, with one of these being mail-in volume being greatly reduced while social media volume has increased greatly. Carolyn points out that her book is the only comprehensive “how to” book which details, step by step, how to enter sweepstakes in the market, as well as points out the things to avoid so one’s time doesn’t get wasted.

Carolyn points out that there are three different legal definitions to prizewinning competitions: 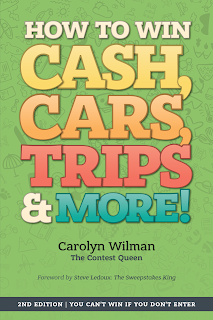 For Carolyn, organizing is key, so that one can enter the most number of sweepstakes in the shortest amount of time, and she herself spends only one or two hours a day entering and checking on sweepstakes. Carolyn, however, points out that it is a numbers game, and that one will enter far more often than one will win. Carolyn presently works as a sweepstakes marketer and thus has a unique perspective on both sides of the sweepstakes coin, and she noted that, at present, around four billion US dollars are spent on sweepstakes in the United States alone. The prizes range from $25 gift cards to large ones worth $50,000, and Carolyn remarks that, for her, the experiences that come with the prizes are the true prizes. That said, she doesn’t mind winning smaller amounts, as these help her out financially.

Carolyn notes that people need to think they’re lucky to succeed. She also noted that a scientific study had been done on luck by a Dr. Richard Wiseman, which was printed out in a book, and that the study proved that people who had positive outlooks and believed in opportunity had brains that were wired to see more opportunity. 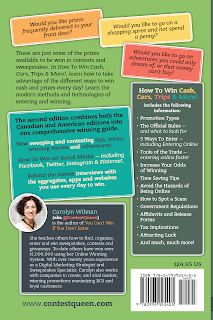 Carolyn remarked on the legal aspects of sweepstakes, pointing out that there are lawyers that specialize in sweepstakes laws and that the rules are legal and binding contracts that can stand up in courts. Carolyn thus advises people to read the rules and notes that sweepstakes are not on-the-fly. She also revealed that, as a marketer, she reads through the entries to see if these conform with the rules.

Carolyn noted that her wins come in waves, with long periods of time when she doesn’t win something, followed by times when she wins a lot of prizes within a short period of time. She also noted how “sweepers,” those who enter sweepstakes as a hobby, enter sweepstakes continuously and consistently for at least three months, daily, before they can see results. Based on statistical research, one can win at least 30% of the time, but that does not guarantee a big win. Then again, you’ll never know what you can win if you don’t enter.

Purchase from Amazon: How to Win Cash, Cars, Trips & More! by Carolyn Wilman

Posted by alvinwriters at 4:13 AM 2 comments: 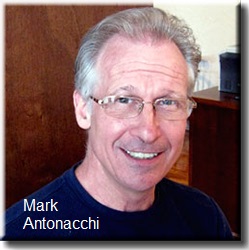 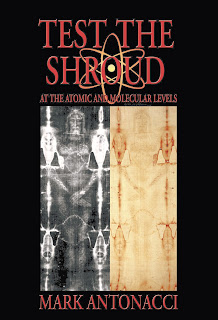 Purchase from Amazon: Test the Shroud by Mark Antonacci
Posted by alvinwriters at 1:55 AM No comments: