Gary Stone talks to Alexander “The Engineer” Lim, host of AuthorStory by alvinwriter.com about his book, Blueprint to Wealth: Financial Freedom in 15 Minutes a Week.

“Spectators that watch from the sidelines never learn. You have to engage and you have to go through the journey, with all the ups and downs that come along with it.” ~Gary Stone

Gary started his career as a mainframe computer operator who became a salesperson, and after earning a lot of money, began figuring out how to best invest his money. He didn’t become a trader or some such, and all the lessons he learned after decades of investing and investigating on how to invest were hard-earned ones where he lost some and won some. He got hooked on technical analysis, which is looking at the price movement of stocks and indices, and in 1995, he started a business which combined his computer and mathematical skills with his interest in investing to provide software solutions to clients. He then immersed himself in mechanical investing, creating a “mechanical” investing system that alerts its user when to buy and sell, based on price movements in the financial markets.

Gary never thought about writing a book whose background theme is the power of compounding, which might be covered in some schools as a subject but which isn’t covered as extensively as it should be. He had a lot of clients over the years who had repeatedly encouraged him to write a book, and it was only after meeting two-time book author, Mark Douglas, that he finally set out to do so. It took Gary twelve years to finally bring out Blueprint to Wealth, along the way, writing another book that he didn’t publish because he wasn’t satisfied with the way that book turned out, since the investment instrument types have matured over those twelve years. Gary remarked that the research and checking the validity of the research took three years alone, and that the way he wrote the book evolved to the one that it presently uses, i.e., as a conversation between Gary and a fictional would-be investor, to be engaging to its reader.

Gary also defined some terms he used in the book:


Gary remarks that, as an investor, the long-term horizon is one that is greater than fifteen or twenty years, which is the kind of horizon that people will take decades to retire should consider, while shorter-term horizons, such as those of five to seven years, would be more applicable to someone who are closer to retirement. He does differentiate between the way a trader and an investor would look at horizons, as a trader would consider a seven-year horizon as being a long-term one.

Gary notes that the argument behind “timing the market” is based on the finding that, if the ten best return days are removed from an index within a ten-year period, this will wipe out all of the accumulated returns for that ten-year period. This is the present conventional wisdom, but Gary also looked at what happened if the worst return days were removed from an index within a ten-year period and discovered that an investor would do better than if he stayed in the market all the time. Gary’s findings, when he removed both the ten best and ten worst days from an index, within a ten-year period, are that an investor would do very well when doing so. He noted that the best days occur in close proximity to when the worst days occur, and points out that his definition of “timing the market” is not doing so on a day-by-day basis but on a month-by-month or week-by-week basis, commenting that an investor, using the strategies he described in his book, only needs to change investments two or three times a year, which he calls “near passive, low effort” market timing.

Gary’s method is one where an investor doesn’t need to do value investing, where the investor goes through such documents as profit and loss statements, balance sheets and broker reports, which takes a lot of time, as all an investor needs to do is invest in an index exchange traded fund (ETF), which is effectively an index mutual fund listed on the stock exchange, as doing so invests across the stocks in the index. This has a bit of a safety net, as indexes don’t go to zero and indices are rigged to rise, as if a stock falls out due to a drop in its value it will be replaced, by the index custodians, with a stock that is rising in value.

Gary noted that it takes an average of 4.5 years for the stock market to recover, considering the investment of dividends into the stock market. Gary noted that he has two strategies to cover possible bear market losses, with one being investing in an index rather than in individual stocks, and then moving all of one’s investments into cash, and timing being the other investment strategy. Both of these strategies are described in greater detail in Blueprint to Wealth. 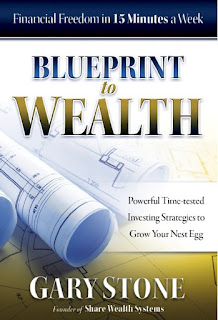 Gary notes that investing is more about psychology and getting the right mindset than anything else, pointing out that a hundred percent success rate will never happen where investing is concerned. Gary remarks that an investor thus needs to learn how to deal with losing money, and that an investor will have more losses than wins, but can have greater returns on his wins than losses. He also remarks that investors need to embrace the volatility of the stock market, as it gives the best returns at lowest cost, and invest in an ETF to build up their retirement funds, as they can cut fees by up to twenty times, compared to if they went into a mutual fund. Gary also remarked that becoming a successful investor enables one to become a better person, due to the needed development of the traits necessary to becoming a successful investor - surrender, empathy, big picture perspective, persistence and resilience.

Purchase from Amazon: Blueprint to Wealth: Financial Freedom in 15 Minutes a Week, by Gary Stone

Posted by alvinwriters at 4:27 AM No comments: