Scott Stein and His Clever Leadership Hacks & Shortcuts to Boost Your Impact and...

In this interview, Scott Stein talks to Alexander “The Engineer” Lim, host of AuthorStory by alvinwriter.com, about his book, Leadership Hacks: Clever Shortcuts to Boost Your Impact and Results.

“If they [leaders] can delegate, they can actually get a lot more things done in less time.” ~Scott Stein 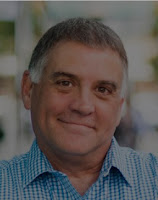 Scott Stein has collected a great number of hacks from various leaders whom he has dealt with in the past twenty-five years, and after sharing these with several other leaders, it often was the case that the latter would ask him to write those hacks - effective shortcuts which help boost productivity - so they and their people could refer to these. The result was Leadership Hacks, which is portioned into sections in such a way that a reader wouldn’t need to read the book from cover to cover to get anything out of it, and instead just check on the section he or she is interested in so they could improve their effectiveness.

The top challenges facing leaders today, according to Scott, is not having enough time for them to do everything they need to do. This results in leaders taking shortcuts which may be inappropriate in the long run, as they will eventually need to work harder and will need to deal with any negative consequences of such actions on their people. Where leadership throughout time is concerned, one of the biggest challenges has been having one’s people take action in a manner the leader wants, and this has been exacerbated at present by the need for leaders to make decisions and take action quickly. Scott notes that leaders today need to be smarter in the way they work, so they can be more efficient while not skipping steps as they go along, and the book provides practical advice and procedures for doing so.

Scott notes three categories of hacks where leadership is concerned, all of which he has hacks for:


One of the hacks that Scott mentioned was how to hack one’s inbox, which is particularly vital if the leader is in charge of an organization with literally thousands of people. Moreover, according to a McKinsey Global Institute report, leaders spend around two and a half hours of their time each day reading and answering e-mails, which makes hacking one’s inbox important. Scott mentions a four-step e-mail inbox hack which he picked up from a global HR leader who deals with 15 countries and over 10,000 people under her. The process is as follows:


Scott also gave some advice on how to get e-mails responded to, and this is by telling the recipient, in the Subject line or at the very beginning of the e-mail, what the desired outcome is. There are five different types of outcomes, which give context to the reader, viz.:


Where delegation is concerned, Scott notes that, according to a Harvard Business Review article noted that more than half of the companies surveyed were concerned about the ability of their leaders to delegate. Scott believes that most leaders don’t delegate because of the time concerns, as leaders feel that the job could be done more efficiently, and in the way the leader wants it, if they did the job themselves, rather than giving it to a subordinate and having him mess it up. Leaders also might not trust their subordinates, for whatever reason, or might not have trained their subordinates properly, which makes leaders reluctant to delegate, and Scott notes that there are no organizations that give leaders a process on how to delegate, and then remarks that there are four levels of delegation.

Level 1: “Don’t do it, because I’ll do it myself.”
Level 2: “Let’s work together to map out / write down the activities, and the sequence that the activities need to be taken, along with a time frame for doing these.”
Level 3: “Create your own map on what needs to be done, and I’ll check on it before you carry out the task.”
Level 4: “I’ll give you this task to do, and then check on you later.”

Moving one’s staff up these levels, Scott notes, empowers the staff and gives the leader more time to handle other things.

The three ingredients of leaders who are admired by other leaders have three aspects which enable them to get things done in a way that motivates their people:

Mindset - open to learning and trying new things. This is the Growth Mindset mentioned by Carol Dweck in her book, Mindset: The New Psychology of Success, as opposed to the Fixed Mindset, as the Growth Mindset is the belief that one can cultivate one’s learning as well as learn from one’s mistakes.

Approach - the steps taken and how one’s subordinates are engaged so that they will take those steps.

Impact - on the people around the leader.

A lot of leaders learn into becoming a leader, according to Scott, and these leaders often guess and decide along the way, where risky decisions and possible new ways of doing things are concerned. 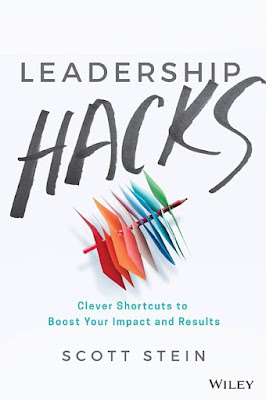 There are four different kinds of team meetings, according to Scott, and these should all be done separately, rather than all mashed together into one major meeting, as each meeting has its own process. Scott notes that meetings are a waste of time, according to nearly half of the recipients of a survey given, and the types of meetings are:


Where technology is concerned, Scott points out that, according to all the research done on the topic, technology is highly distracting. Even having a smartphone beside one can reduce cognitive thinking and ability, because of the notifications that come in; and the impact extends into family life, when a leader is stuck to a screen when the rest of the family is around and wants to spend time with him.

Purchase from Amazon: Leadership Hacks: Clever Shortcuts to Boost Your Impact and Results by Scott Stein

Posted by alvinwriters at 12:31 AM