Gurutej Khalsa talks to Alexander “The Engineer” Lim, host of AuthorStory by alvinwriter.com about her book, The 13th Month: How You Can Get an Extra 29 Days Each Year.

“When you get in the company of the whole, you become more whole.” ~Gurutej Khalsa 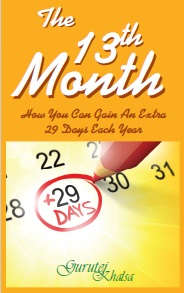 Gurutej Khalsa, a pioneering Kundalini Yoga guru based in Los Angeles in the United States, presently teaches yoga, consciousness, community building and meditation throughout the world. Her book, The 13th Month: How You Can Get an Extra 29 Days Each Year, came to be because one of the things she often hears from people are statements which essentially say, “I don’t have time.”

Her intent for writing the book, The 13th Month, is to enable its readers to shift some patterns in their lives so they can do things differently. One such aspect is breathing, and during the interview, Gurutej did a four-part, basic breathing exercise with the interviewer which made the latter somewhat lightheaded (as Gurutej commented it would) but which also made him somewhat more alert. Gurutej also mentioned that she has yoga flipcharts of eighteen different exercises, some of which could, in ninety seconds, help one clear out one’s head, like before going into a meeting to create a clearing for new thoughts or to take in something new. She also mentioned that one’s day actually starts when one goes to sleep the night before. She mentions that her book gives some possible ways to address the issue of getting a good night’s rest, and that she took in the feedback that she got so she could create exercises that could be done in the span of ninety seconds to three minutes.

There was some problem in connectivity when Gurutej spoke on the topic of energy. She pointed out that most people don’t think about personal energy when the word “energy” is mentioned, and she pointed out that she wants people to think about this, as she believes that if people can change their energy state, they can use the energy, such as from anger, through a process of releasing and recycling and reusing, to transform and fuel themselves, rather than drain them.

Gurutej mentioned that her name was given to her by her teacher, and that a change in name reflects a change in energy and resonance that affects the person so called in a certain way, such as, possibly, the Spirit.

Gurutej said that she had always been spiritual, and in her former life as a Catholic, she loved the energy, if not the politics and the angst, and at a very young age she told her mother that she would start her own Order once she was old enough. What drew her to yoga was its teaching that the body can be brought into a higher state of consciousness along with the spirit, unlike the teachings she encountered in several religions that the soul is good and the body is bad.

Gurutej pointed out that Western yoga focuses more on exercise rather than the archaic Indian version, which also focuses on meditation as well, but that yoga, as practiced in the West, is still good, as it enables people to breathe differently. She points out that, with Kundalini Yoga, the branch of yoga that she follows, meditating in the morning sets one’s day, and the challenge is how to carry that energy throughout all the challenges that crop up during the day.

Gurutej admitted that, in the 1960s, she "took enough drugs to take out an elephant,” and when she discovered yoga, she realized that she could achieve that same high with yoga as she did with drugs, and so switched over to yoga. She opined that the atmosphere in the 1960s was the Universe creating an opening to prepare the world for the present times, and sprang from the experience of the 1950s, where women needed to find ways to manage the lives and worlds that had been created for them. Gurutej mentioned that the desire for connection, the desire for something much more, was one of the drivers for the creativity of the 1960s. 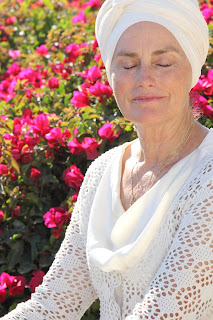 Gurutej expressed her desire to experience dancing more, and also noted that it’s more about how we go through an experience and what one gets from it is what counts, rather than not wanting to experience something. She notes that she had gone through challenges in her life, such as the death of her daughter and being a single mother, and that there is a gift behind each experience, regardless of how “horrendous” the experience might occur to a person. She gave Nelson Mandela as an example. For her, she pointed out that being the best that one can be at a certain age is  what matters, as our needs and desires and lessons learned change from age to age, and that bringing one’s wisdom at the age of, say, fifty, to that same person at the age of twenty, wouldn’t work because of this.

The 13th Month: How You Can Get an Extra 29 Days Each Year, is an ideal book for anyone who thinks he or she does not have the time. With the help of yoga, Gurutej Khalsa can help you create that time and you also get the benefit of having more energy and zest for life in the process. She's a living example of what she teaches in the book.

Purchase on Amazon: The 13th Month: How You Can Get an Extra 29 Days Each Year, on Amazon

Posted by alvinwriters at 4:20 PM

Email ThisBlogThis!Share to TwitterShare to FacebookShare to Pinterest
Labels: alvinwriter.com, author interview, AuthorStory, being an author, books, Gurutej Khalsa, inspiring story, The 13th Month: How You Can Get an Extra 29 Days Each Year, writing inspiration, yoga