In this interview, Deryck Richardson talks to Alexander “The Engineer” Lim, host of AuthorStory by alvinwriter.com, about his book, Go Play: The Ultimate Road Map to Winning the Game of Life. 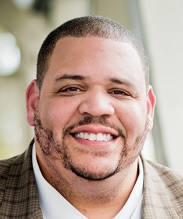 Borders had never much existed for Deryck, even when he was younger, and this was how he got into all the many things he did. As an African-American who grew up in a white suburb, he got acquainted with grunge music, which seemed strange to his relatives in urban neighborhoods, who were not used to “white music.” HIs first job was when he was fourteen years old, working for a “boiler room” organization which called up people to donate money to another organization. He was taught the fundamentals of sales and got “addicted” to commissions, and as he and some others were underage kids, the Attorney General of Ohio shut that down twice while Deryck was there.
Deryck went to school because he was a teenage father and, after dropping once out of college, went back in because he wanted to coach and needed a degree for that. It was then that he realized that, while he wanted to teach, he wasn’t motivated by the idea of working for a paycheck, so he got out of teaching and got into the mortgage business. He made some “big boy” money until the mortgage industry crashed in the early 2000s, then went into insurance, after which he then became a “serial entrepreneur,” owning an insurance agency and a marketing firm which is one of the fastest-growing companies in Columbus, Ohio in 2020, as well as a coffee store and being a community volunteer, author and speaker.
Deryck remarks that he had always been “the leader of the pack,” when growing up, particularly as he was the first in their group to do such things as drive a car and get a job. He had been a sales manager at the age of twenty, which reflected this “knack for leadership,” particularly since he was managing older people.
Deryck’s life experiences are a living testament to the philosophy he espouses in Go Play, noting that, as kids, whenever Mom told kids to “go play,” she didn’t specify what the kids should play with, so the kids were pretty much free to do anything they wanted. This is an attitude that Deryck remarks is something that adults don’t do “often enough,” as adults consider their life experiences and expectations of what they’re supposed to do whenever they select the things they decide to do - which is typical of the “vast majority” of people, in Deryck’s experience. “The go-getters don’t really care what people think,” he says.
Failure and stress, as well as mental health considerations as depression and anxiety stemming from failure, are, in Deryck’s opinion, some of the blocks that keep people from just going out and playing. “If you get knocked down and you’re really determined to succeed at it, you’re just gonna get back up,” he remarks. He also remarks that the people around one are likely to have failed themselves, which leads to their not having faith in one, which means, essentially, that one’s own circle of friends, acquaintances and family are likely not going to enable one to ascend. Deryck admits he feels “different” from those in his immediate circle, and while he has attempted to bring some of these along with him in business, they have decided to not go with him. “If you’re not gonna keep up with me, I’m gonna leave you,” Deryck notes after mentioning that, as he ascends, he no longer expends the energy to “reach down” to help those in his circle. Not allowing others to influence one’s decisions or actions, is, the key to doing what one wants to do, Deryck emphasizes. “They’re not you,” he remarks; “you are the only person who is you in this world.”
Deryck admits that he’s been broke before, has had failed relationships and has failed “a million times.” “I’m lucky because I get hurt all the time,” he remarks, “I get bruised all the time. And if luck means that I get back up again, then I guess I am lucky.” He also notes that luck occurs when hard work meets opportunity, and which is why he continues to put the hard work in and continues to be willing to take on the opportunities that come his way.
Deryck admits that a lot of the concepts in his book are “brand new” concepts, as this is all about setting one’s mindset. The twist here is bringing the reader back to the reader’s childhood, when the reader was seven and immersed in the mindset of just playing, of just doing while not listening to people, rather than failing when others say you fail. In addition, Deryck includes stories from his own life. “If you’re going from level to level continuously, like in a video game, then you’re winning,” he remarks, “you’re continuously improving.” He also made the book a short one, at one hundred pages, as he didn’t want readers to finish it, rather than for a racer to get to “Chapter 7” and then just put it on the shelf, never to be read again. (He’s working on two follow-up books which are, essentially, the other parts of the original, three-hundred page book which he conceptualized.)
Where the book is concerned, Deryck notes that one of the reasons it is relatable is that it can bring the reader back to the state of childhood where everything is possible, as well as that it shows how relevant the concepts are to one’s daily life, thanks to several stories that highlight these concepts. (Deryck then gave the story of the lumberjack who came out of retirement, and commented on how this would apply to everyday life, as well as how two of his present businesses came to reside in the same office, due to his willingness to change directions.) 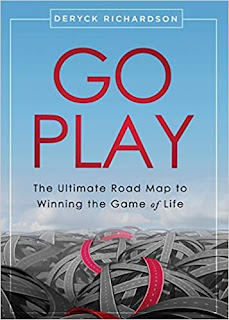 Where today’s environment is concerned, Deryck remarks that the year 2020 is “an example of why people need to ‘go play,’” remarking that the situation, for him, was one he hadn’t encountered before. He gave the example of starting a vacation with his wife on March 15 of that year, then needing to return on the 16th to coordinate the continuation of his business, as the state of Ohio ordered businesses to close down that day. He had his tech team set things up so that his people could work for home, and he remarks that those were some of “the best decisions I made in a 24-hour period.”
Deryck advises those who have an idea to “act on it.” “What’s the worst that can happen?” Deryck asks, adding that it just might not be as good as it was, and one would still gain some wisdom and knowledge and experience if it doesn’t pan out.
Purchase from Amazon:
Go Play: The Ultimate Road Map to Winning the Game of Life by Deryck Richardson
Posted by alvinwriters at 8:54 PM