Nicholas C. Nicholas on How His Novel Pericles and Me: A Novel of International Intrigue Was Based on Real Life

In this interview, Nick Nicholas talks to Alexander “The Engineer” Lim, host of AuthorStory by alvinwriter.com, about his novel, Pericles and Me: A Novel of International Intrigue.

“If you’re full of life and can laugh at yourself, you’ll get along pretty well overseas.” ~Nick Nicholas 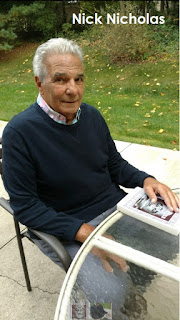 Nick was born in Pittsburgh, as the child of Greek immigrants, who put a lot of stock in education. Nick got a bachelor’s and master’s degree in Physics, and a Ph.D. in Physics and Mathematics. Most of his career was spent working for the United States Department of Defense, and this entailed a lot of travel, such as in the Middle East and eastern Europe. Nick admits that he was interested in different places, and a lot of what he wrote in Pericles and Me is drawn from those experiences.

Early during his career, Nick was an engineering officer in the first simulated Apollo flight, which meant that he wore a pressure suit and did all the tasks that the astronauts would go through during their mission proper. The work gave NASA a good idea of what to expect during the mission, including such factors as fatigue amongst the astronauts.

One of the places Nick went to was Saudi Arabia, and the Saudis requested the National Science Foundation name him the Senior Program Manager for the Middle East. As such, he got to know quite a few high officials, and while he was well-treated, as he was a visitor in a culture that was hospitable to guests, there were some aspects of middle Eastern culture that “perplexed” him. One of the things he noticed was the easygoing willingness (in Western eyes) of those he worked with to delay projects if needed, telling a story to highlight this. He also learned Arabic, and some of his efforts to do so, as he remarked in a story, made him a minor celebrity in the city.

Another place Nick went to was the Ukraine, shortly after the Soviet Union broke up, and his partner suggested they help the Ukrainians decommission their nuclear weapons. The pair went to the main Ukranian diplomatic representative, and their intended original 30-minute meeting extended to three hours, which ended with their being invited to Ukraine to decommission nuclear weapons there, starting about February, 1992. It was also here that he met a three-star general who told him that the Soviet Union was terrified of the United States’ nuclear arsenal, stating that, if the Soviet Union, which cared only about winning and not about how many people would actually die, had the same numbers in their nuclear arsenal that the United States did, they would be the ones to launch a first-strike nuclear attack. It was also here that he befriended a man who was assigned to follow him around, and that man, who was just trying to do a job, became his adviser.

Nick also was in Germany, working on the Pershing missile system to tweak these to be better effective against the Soviet missiles that were then pointed against Western Europe. The United States had 600 nuclear armed missiles in Western Europe at that time, and it was also while he was in Germany that Nick was approached by a spy and approached to be a spy for the Soviets. Nick promptly reported the contact with security, which ended that situation.

Nick was at a meeting where the cost of nuclear strikes was analyzed, and it helped when he thought of casualties in terms of stadiums full of people, to bring the full impact of such strikes home. He also noted that it was President Regan who supported the nuclear arms race that kept the Soviet Union in check until its economy collapsed, with the Soviet Union being disbanded on December 31, 1991.

“There are a lot of true events in this,” Nick remarks about Pericles and Me, “and I challenge readers to separate the true events from the fanciful ones,” particularly because some of the most “outrageous” things were true. One of these events was when he and his partner spent a night in an insane asylum because they couldn’t find hotel accommodations. Writing the novel was actually a cathartic act for him, as some of the things that he saw and experienced during his career bothered him, such as the disjunction between what was actually saw, on the ground, and what American higher-ups believed what was going on. He just “started writing,” with no plot outline, and it took him three months to write 400 pages, with an ease of flow that surprised him greatly. He then had it reviewed, edited and published, and the resulting story has several facets in it, as well with most of the characters in the book being based on people Nick actually knew. He found writing a novel to be more “relaxed” compared to writing technical papers, and he found the advice he learned from one of his college professors - “By God, you’re going to be able to write simple declarative sentences” - to hold true when it came to diplomatic conversations, as different languages have different nuances, which result in a lot being lost in translation. 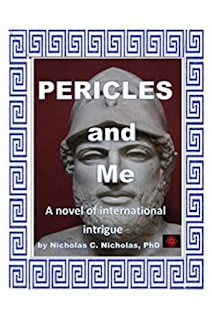 The device of using Pericles was a way Nick used to compare present and past history, particularly since the Athenians did a lot of things that the United States did, where foreign policy was concerned. One such parallel was the Athenians sending a fleet on a friendship visit to the Black Sea to quell some restive natives there, and the United States sending their Great White Fleet to the Pacific to show that the United States was interested in protecting their territories there. Where using Pericles was a plot device is concerned, one of Nick’s editors wanted him to bring Pericles in gradually, but after giving Pericles’ initial introduction into the story to two of his grandchildren to read, he decided to keep the introduction as it was, as his grandchildren liked it.

Nick acknowledges that he’s “not F. Scott Fitzgerald,” but since the story of Pericles and Me is entertaining and reasonably humorous, “that is good enough for me.” He is presently working on two books, How I Won the Cold War and I’m Not a Greek, I’m from Pittsburgh, with the latter playing on the dual cultures that most Americans have, with one part of their culture being American and the other being the ethnic group that they descended from.

Pericles and Me: A Novel of International Intrigue by Nick Nicholas

Posted by alvinwriters at 6:40 PM