Julie Zickefoose on Painting and Taking Care of Baby Birds

Julie Zickefoose talks to Alexander “The Engineer” Lim, host of AuthorStory by alvinwriter.com about her latest book, Baby Birds: An Artist Looks into the Nest.

The bird sounds used in this video were not intended to be representative of birds from the northeastern United States, specifically the Appalachian foothills of Ohio, where Julie Zickefoose, the author, lives, although you will hear some of them, such as the Yellow-billed Cuckoo, the American Crow, and the Chimney Swift, all of which had been individually added over the ambient background audio. See if you can identify them. Can you also identify the country of origin of the ambient bird sounds?﻿

“To be able to see baby birds gain their independence and become what they were meant to be is a beautiful thing.” ~Julie Zickefoose 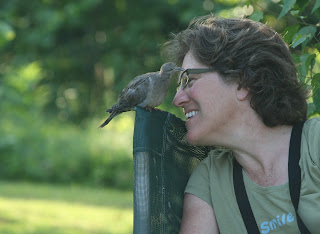 Julie is a licensed wildlife rehabilitator who got interested in birds at the age of eight when her attention was attracted by the sound of a bird bathing, which she followed to its source - a warbler. She was so fascinated by her discovery that she borrowed her father's binoculars to seek out more birds and was helped out by a few neighbors who were familiar with birds. The was the start of her bird watching, but she didn't know that bird watching existed until she got into college. It was in 1981 when she began setting up nesting boxes for bluebirds, that she began looking into their nests and became fascinated with their development as chicks, and this was also when she began painting them. 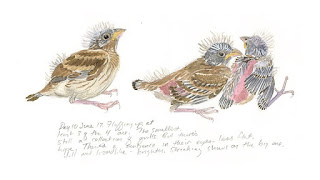 Julie's first job at college was with the Connecticut chapter of the Nature Conservancy, where she was assigned to investigate which plant and animal species which were the most endangered in certain locales. Once she discovered the nests of endangered birds, she fenced these off - a first in Connecticut. Within three years' time, she was in charge of thirty volunteers and eighty miles of coastline. It was a daunting task and she always knew that she wouldn't get rich in that job. Julie then turned to illustrating, something she had been doing since she was very young, to help herself out financially. It was also something that she had already done in college for some of her classmates' papers. She freelanced as an illustrator for newsletters and magazines and books, and her writing extended from there. 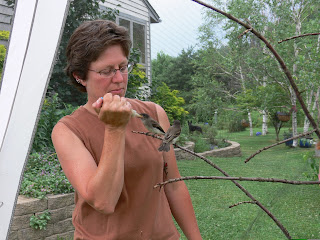 It was while looking into nesting boxes and realizing the miracles that she was seeing that Julie realized that not everybody got to saw how birds developed, and this was her primary inspiration for creating Baby Birds. She had always kept nature journals with her paintings and associated notes on the side, and she then decided to “borrow” some baby birds, drew them in her studio, and then returned them a short time later. The birds she illustrated were those from the nesting boxes she kept safe from predation, and it helped that the parents of the birds were comfortable enough with her to trust her to bring their chicks back to them, safe and sound.

Where making illustrations are concerned, Julie uses watercolors, a medium which she had been using since seventh grade, remarking that watercolor works exactly how she wants it to, letting it run and blend into the paper. Creating a single page for the book takes as long as the bird needs to develop, which means as long as a month or so, as she also records the time after the birds leave the nest. 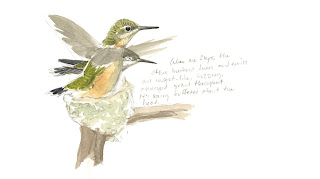 Chimney swifts are, in her experience, the most challenging to raise, as they have a long nesting period of around twenty-five days and need a lot of water and calcium to survive. Hummingbirds (left) likewise proved to be just as challenging, as they need to eat every twenty minutes or so due to their fast metabolisms. Cedar Waxwings, on the other hand, were the easiest for her to raise, as they ate only fruit and berries and picked up their own food at a very young age.

Julie noted that raising birds gave her some powerful and compelling insights into how birds think, and her training in bird behavior and ecology helped out with her writing. Julie focuses on showing the birds rather than attributing the birds’ thoughts to it, and she remarked that birds have their own goals, thoughts and emotions. One of the things that surprised her was how well the birds she raised or had rescued and fed, such as some hummingbirds, bonded well with her, as these would follow her around whenever she went out into the yard. 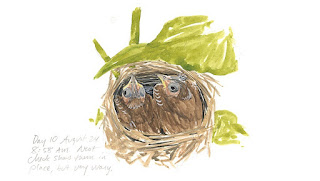 Julie notes that birds are very vulnerable while in their nests and need to get out of it as soon as possible. The growing birds are then supported by their parents outside of the nest for several weeks, as they learn such things as which foods are good  and what calls relate to which possible dangers are around.

For potential bird watchers, Julie suggests to observe from a distance with a good pair of binoculars and stay out of the birds’ space since birds watch humans possibly even more closely than humans watch birds.

Writing Baby Birds made Julie realize that she has found a niche that she is uniquely qualified to fill, given all her certifications, skills, and time she can take out to observe them. In addition to working on another possible book on baby birds, Julie intends to write a book about her Boston terrier, Chet Baker, who already has a Facebook page of his own. 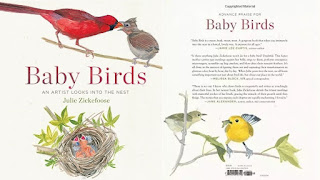 As advice to those who want to create something like her book, Julie has a quote:

Julie Zickefoose’s website for her book, Baby Birds: An Artist Looks into the Nest, is juliezickefoose.com.

Purchase on Amazon: Baby Birds: An Artists Looks into the Nest by Julie Zickefoose

Posted by alvinwriters at 4:17 PM