Kathleen Drucker Spivack talks to Alexander “The Engineer” Lim, host of AuthorStory by alvinwriter.com about her book, Unspeakable Things. 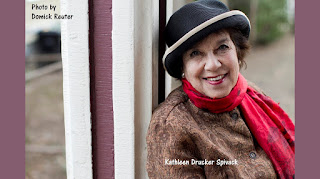 Kathleen’s father (influential management consultant Peter Drucker) and grandfather, when they came to the United States, were initially unemployed when they came over to the United States, so they had a lot of time to read Greek myths and various other stories to Kathleen, which made her realize that she wanted to become a writer and teacher. Kathleen remarked that she would bribe her little brother with candy so that she could play “teacher” with him as the student.

At the time when Kathleen grew up, there weren’t many avenues for writers or women to earn a living, and it was her drive to gain life experiences that led Kathleen to do various jobs, such as being a factory worker for her to become an effective writer. She remarked that she feels lucky to have lived the life she has, and also noted that it’s hard for her to really explain to others just how lucky she feels.

Kathleen’s family came over to the United States during World War 2, where they fled the Holocaust. She and a lot of other refugees would be packed together into a room, and at night, when everyone else was asleep (or supposedly asleep), she would hear hair-raising stories about what they experienced. One of those she listened to was an old woman who had circles under the eyes from the suffering she had endured and who told her stories so tragic that the young Kathleen would ponder somewhat uncomprehendingly over these for many a day. She remarked that refugees didn’t speak about what they went through to their children, as this is necessary for them to move on from the tragedies they experienced, and the children didn’t speak about what they were going through to the parents, which results in a shadow that hangs up to the grandchildren of the refugees.

Kathleen remarks that the first generation of refugees who come to the United States write about the experiences of their families as a way to vocalize the things that their elders wouldn’t talk about, and as a way to record what had happened before it’s forgotten.

One of the inspirations for Kathleen writing Unspeakable Things was when she was in France at a time when the French were coming to terms with the “unspeakable things” that occurred during World War 2, such as turning over their Jews to the Nazi occupiers even before the Nazis asked for these. She had always been interested in merging the two identities she had felt she had - her American identity and her European identity - and she went to France in an attempt to do so, which worked out. It was while she was being given a ride home by one of her female students, during her first year of teaching in France, that the latter remarked that her father and grandfather had been guards at the first French concentration camp for Jews (Drancy?) and that she had seen scratches made by the fingernails of people who were desperate to get out. Kathleen found this confession unusual, and her French colleagues remarked that that student wouldn’t have told them about that.

France has laws limiting the number of years a foreigner can teach in their country, so Kathleen applied for, and got, a Fulbright scholarship which enabled her to greatly extend her teaching stay in France. As part of her application, she wrote a five-page story about her grandfather wheeling and dealing with other people to get their relatives out of occupied Europe, and it was these five pages that she eventually expanded into the novel, Unspeakable Things. Kathleen remarked that each character in the book has his or her own particular musical piece associated, and the book is based on musical composition, and she admits that some of the parts were over the top and some of it is meant to be funny. Kathleen admits that writing the book took her deeper into herself than she had ever done before. 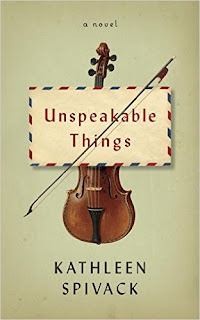 Kathleen admitted that she doesn’t know from where her creativity comes from. For her, it is who she is and what she does, and also remarks that she still has a several books to write. She loves to read and work with writers from all over the world. She notes that she had, just like everyone else, had stereotypes about age and that, now that she’s a senior, she’s not experiencing that which she thought old people experienced. Moreover, when she sees her friends who are ninety, she wonders what it would be like to be their age.

Kathleen advises would-be writers to take the time to write it because, for her, writing is something like practicing tennis - it improves with practice. She remarks that people close to a writer, such as a husband, wife, boyfriend or girlfriend, are supposed to be cheerleaders rather than critics, and that writers should choose people other than these to be critics of their writing.

Posted by alvinwriters at 6:11 PM