Kayt Sukel: How to Take Risks and Win | The Art of Risk from National Geographic Books

Kayt Sukel talks to Alexander “The Engineer” Lim, host of AuthorStory by alvinwriter.com about her book, The Art of Risk: The New Science of Courage, Caution and Chance. 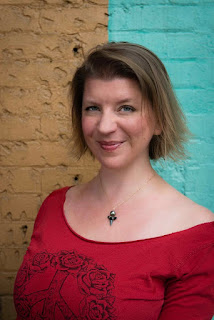 Kayt freely admits that she became an author “by accident.” Although, as a child, she once told her father that she wanted to be a writer, and her father suggested she go into computers, as that was “where the money is,” which is how Kayt wound up in Carnegie Mellon University, as computers are widely used there, regardless of course taken. It was when she moved to Europe that she began writing essays and articles for various publications, as she had a new baby by then and needed something to do to fill her time, and a lot of her essays had to do with being a new mom, an expatriate and a military spouse. Her writing career built up from there, and she now has two books published, with a third one likely on the way.

Kayt admits that The Art of Risk initially started out as a book on superheroes, a set of people that had a set of genetic or environmental gifts that enabled them to take risks and still come out ahead. The book, however, became what it was when she realized that risk-taking is a cognitive process that is involved in every decision made every day, and that the people she was interviewing for the book, whom she regarded as risk-takers, such as brain surgeons, firefighters and special forces operators, invariably said that they didn’t consider themselves to be risk-takers. Kayt realized that she, herself, didn’t take unnecessary risks and that by having a better understanding of how the brain responds to uncertainty, people can work around this rationally.

Kayt is a self-confessed “brain nerd,” and this, coupled with her training as a cognitive neuroscientist, makes her approach to human questions on such things as love and risk-taking come from the perspective of the brain, which is responsible for every thought, feeling and behavior that humans do. She notes that we talk about risk in extremes, be these potentially very bad (such as getting killed or going bankrupt) or very good (such as achieving enough wealth to live one’s dream life). That said, risk, Kayt remarks, is a necessary part of everyday life, and comes up in such simple decisions as whether or not one should take a third cup of tea or when to schedule a meeting, where the uncertain outcome could be either negative or positive.

Kayt notes that, the more often one deals with even such everyday, seemingly small decisions as whether or not to have another cup of tea, is much the same way that people who are regarded as risk-takers handle the risks they take. She notes that training, experience and education enables brain surgeons and special forces operators to view the risks inherent in the work they do as manageable - particularly the training that exposes them to situations where things go wrong, so they can learn how to manage such scenarios. She notes that those same people would likely “freak out” if they were thrust into a domain they weren’t familiar with, such as the extremely experienced firefighter she interviewed who was so chary of IRS audits that he has an accountant handle his tax reports.

Kayt notes that risk is in the eye of the beholder, mentioning that, as a pre-teen, she took the New York subway all by herself, and that, when she mentions this to the people around her today, people who aren’t New Yorkers, they are horrified by her stories as, to them, riding a New York subway is a free ticket to a mugging. She also notes that, if a New Yorker were put in a rental car and placed in the middle of a state where there is a lot of land and very few landmarks, they would be the ones to get very nervous because of the risks they perceive. 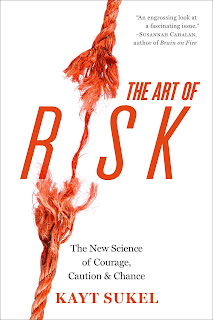 Kayt remarks that, according to research, one of the predictors for outcomes of negative risky behavior, such as dying of a drug overdose or ending up in jail for a random act, is having a Y chromosome, which means that men are more prone to these. She notes that the brain loves novelty and that there are genes that are related to impulsive behavior, such as the DRD4 gene, which is actually designed to enable us to access the things we need to do or get in order to survive by enabling us to get out of our comfort zone and colonize places other than those we grew up in. That said, Kayt remarks that it is actually the interaction amongst, and resultant contribution of, hundreds of genes that determine what a person does, as the individual contribution of a single gene to human behavior is “very small.”

Kayt noted that Steph Davis, a free solo climber, wingsuit flyer and BASE jumper, was one of the more interesting people she interviewed as, despite having a sponsor cancel on her because they deemed the things she was doing “too risky,” Steph isn’t anything like the aggressive, outspoken kind of person ordinary people think risk-takers are. According to Kayt, Steph is a “homebody,” a smart, thoughtful, considerate person who is very much aware of the possible consequences of her actions, particularly after her husband was killed in a wingsuit flying accident.

To those who are fearful of particular risks, Kayt suggests that they take a step back and imagine what the worst outcome would be, then ask themselves if the cost of that outcome would be too great to bear. She also notes that people become more risk-averse as they get older, and mentioned a scientist who said that, if people pushed themselves more, they would be able to get the things that they want in life. 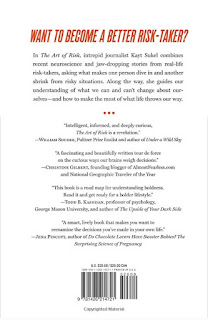 At present (June, 2016), Kayt has paired up with her publisher, National Geographic Books, for a campaign called #summerofrisk, which runs until July 18, 2016. This stemmed from Kayt receiving comments from other people who said they were trying out various risks in their own life after reading her book. The campaign is all about people considering the risks they want to take this summer and get accountability for it, and share these, adding the #summerofrisk and location hashtags, with the favorites going up on the National Geographic Books Facebook page. The top five favorites will be receiving a National Geographic Summer Reads prize pack.

Purchase on Amazon: The Art of Risk: The New Science of Courage, Caution and Chance by Kayt Sukel