John Cairney and His Book about Immaculate Innings in Baseball History

John Cairney talks to Alexander “The Engineer” Lim, host of AuthorStory by alvinwriter.com about her book, Immaculate: A History of Perfect Innings in Baseball.

“I think it’s really human interest stories of the pitchers that make it compelling to all of us.” ~John Cairney 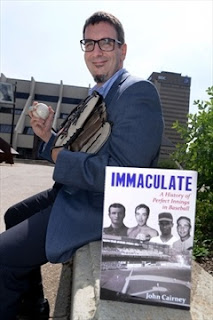 John is a Professor in the Department of Family Medicine at McMaster University in Ontario, Canada, which he acknowledges may be surprising to some, as Canada isn’t known for baseball. He played baseball as a child, has been a long-time fan of the sport, and developed an interest, in his 30s, in the history of baseball. He admits that, as an academic, he wondered if he had it in him to write a non-academic book, and had always been impressed by writers who can write out stories that can pull in people who aren’t interested in the topics, and this book was an opportunity to explore such territory.

A perfect, or “immaculate,” inning in baseball is when a pitcher strikes out all three consecutive batters, who are retired in nine strikes during that same inning, and this is a feat that has taken place only seventy-seven times since the 1880s, when major league baseball was established. His interest in immaculate innings began when, on July 21, 2013, he heard on the radio that Toronto Blue Jays relief pitcher Steve Delabar had pitched an immaculate inning the previous night. He then realized that there wasn’t much on immaculate innings. He was drawn to Steve Delabar’s story and wondered what other human stories lay behind other immaculate innings, and from there he went into researching for the book and wrote about it. 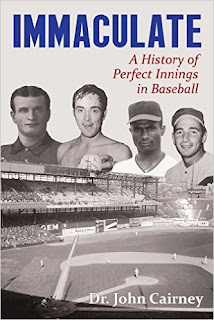 Where researching for, and writing out, the book was concerned, John enjoyed the process and the challenge of creating a non-academic work, and he admits that doing so improved his technical writing, as he had to pay particular attention to the prose, which isn’t a concern when writing technically. He didn’t interview people personally while doing research for Immaculate, and hopes to do so in the future. In spite of that, John noted that he has become more aware of the human aspect of baseball in the course of writing the book, and he mentioned a story when a batter hit a ball hard enough for her to score a homerun but broke her leg during the early part of her run around the bases, which she needed to do to officially complete the home run. Despite the competitive nature of the game, members of the opposite team actually carried her around the bases so that she could touch these and thus officially get her home run registered.

John likes spending time with his family and doesn’t particularly like doing accounting work. In regard to future books, he hopes to write about one topic of interest being the rituals associated with baseball.

John Cairney’s book, Immaculate: A History of Perfect Innings in Baseball, can be found on Amazon, Barnes & Noble and Mosaic Press.

Purchase on Amazon: Immaculate: A History of Perfect Innings in Baseball

Posted by alvinwriters at 2:47 AM