Dr. Ramani Durvasula on Surviving a Narcissist in a Relationship (Should I Stay or Should I Go?)

Dr. Ramani Durvasula talks to Alexander “The Engineer” Lim, host of AuthorStory by alvinwriter.com about her latest book, Should I Stay or Should I Go? Surviving a Relationship with a Narcissist. 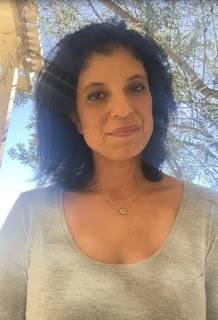 Ramani has had a lot of experience with narcissists, either through her patients or through her own experience, and this is what enabled her to write the book about having a relationship with a narcissist and giving a strategy for people to deal with them. According to her, a narcissist is a person who lacks empathy and is very entitled, grandiose, arrogant, doesn’t care about others’ feelings and always puts themselves first. She notes that this is more and more common with social media to enable them to get validation.

The book outlines thirty characteristics to identify a narcissist, with one of these being that a narcissist would tell another everything about themselves in detail but who wouldn’t listen if that other person talks about themselves to a narcissist, and another example being that of a hair-trigger temper when relating to others, such as having a temper tantrum when they deal with service personnel and don’t get what they want. That said, narcissists are very seductive and charming and can get into relationships easily.

Although the book focuses on narcissism in relationships, Ramani also mentioned, during the interview, that narcissism also is around in other spheres of life, such as in work, with a narcissistic boss. One example that she gave of a situation with a narcissistic boss is that everything one says at work is either ignored or denied, which ties up with the phenomenon called “gaslighting,” wherein one’s experience is denied, resulting in a loss of control, fear and depression. To people who have narcissistic bosses, Ramani advises getting to know what one’s job function is and then documenting all of the things that happen. She also decries that present HR procedures actually enable a narcissist rather than their victim, as narcissists have no hesitation making a lot of legal noise, whereas their victims are unlikely to. 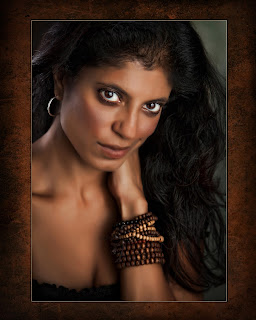 Where the reaction to the book is concerned, psychologists who have worked with narcissists have remarked that the book is spot on, while the narcissists who have reviewed the book have hated it. Writing the book was difficult for Ramani because of her immersion in the difficult topic, and she remarked that doing so was like getting into a relationship with a narcissist, which left her psychologically exhausted. Writing the book also enabled her to to create a far greater state of grace and forgiveness for herself.

Where the release of her book is concerned, and compared to that of her previous book, Ramani is focusing more on marketing it through social media, remarking that grassroots is everything, and is thus working to market the book “from the bottom up,” rather than “top down.” She’s looking forward to this as this is a cause she is passionate about, as well as the sparring that will inevitably take place. She remarked that the topic is enormous and that this is applicable in more areas than just intimate relationships, and that there is looking forward to its international development. 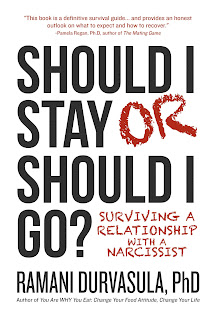 Ramani wants to open a national conversation about narcissism, particularly with today’s children, who are growing up in an environment where technology enables narcissism. She is also working with others to create a series of retreats where people who have been damaged by being in a relationship with a narcissist can get back on their feet. She’s presently considering writing a book, with a colleague, on how popular media fuels such relationship myths such as “beauty and the beast,” where the “beast” becomes a “beauty” through the loving efforts of someone, and is also considering other topics, such as the psychology of women traveling alone.

Ramani loves to travel, as just going to another place “reboots” her, and she dislikes wasting time with people who don’t listen or who aren’t engaged, as she values her time with others, as well as making others do something they don’t want to do.

Ramani Durvasula’s website for her book, Should I Stay or Should I Go?, is doctor-ramani.com.

Purchase on Amazon: Should I Stay or Should I Go? Surviving a Relationship with a Narcissist
Posted by alvinwriters at 7:45 PM

Email ThisBlogThis!Share to TwitterShare to FacebookShare to Pinterest
Labels: alvinwriter.com, author interview, AuthorStory, being a writer, being an author, books, Dr. Ramani Durvasula, inspiring story, Narcissism, Should I Stay or Should I Go?, writing inspiration