Elizabeth Koehler-Pentacoff talks to Alexander “The Engineer” Lim, host of AuthorStory by alvinwriter.com about her latest book, The Missing Kennedy.

“I learned that love and gentleness really was a wonderful way to be with anybody, no matter who you were.” ~Elizabeth Koehler-Pentacoff 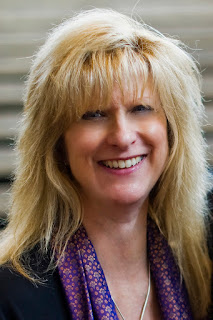 Elizabeth Koehler-Pentacoff’s aunt, Sister Paulus, cared for Rosemary Kennedy, the sister of American President John F. Kennedy, for some thirty years, and it was during this time that Elizabeth began visiting Rosemary, starting at around four years old, which grew into a solid friendship. Sister Paulus, who was called the “Zippity Nun” for her positive and energetic nature, was Rosemary’s main caregiver and related to Rosemary better than anyone else, being able to calm Rosemary as well as do things that others couldn’t make her do while also loving and caring for her. Indeed, Sister Paulus would remark that the favorite times in her life were when she was with Rosemary.

Rosemary’s situation sprang from an attempt to find a solution to a medical concern. Rosemary had always been socially naive and had had trouble reading and writing since childhood, which would, today, most likely have been a diagnosis of dyslexia, despite the fact that she could do three-digit sums quickly. In the 1940s, such distinctions of mental concern didn’t exist, and were lumped together as “mental disease,” and mentally ill patients were shunted into attics and institutions where they wouldn’t be seen by the public in general, places where they were vulnerable to mistreatment and abuse.

Rosemary’s mental condition came out during her teen years, with one symptom being the violent temper tantrums she would throw, and it was during this time period that Rosemary was brought to a doctor for diagnosis. The doctor prescribed a lobotomy, which was the popular treatment of the day to correct such concerns, and Rosemary’s father agreed. Rosemary’s mother, Rose, had no say in the matter, for she was raised in a Victorian environment, where wives obeyed their husbands implicitly. (Today, lobotomies have fallen out of favor within the medical profession as a valid medical procedure and have been replaced by drugs designed to deal with mental concerns.)

A lobotomy consists of the doctor going into the patient’s brain with a spatula and then cutting away at the connecting parts of the prefrontal cortex. Rosemary was awake throughout the procedure and encouraged to sing, and the doctor stopped only after she could no longer sing, which was a sign that the procedure was completed. Rather than heal her, however, the procedure only exacerbated Rosemary’s condition, so much so that she was sent to an institution where she could be better cared for. Her father, Joe, was the one who gave the green light for the operation, and he was apparently so stricken with guilt and shame at what had happened that he forbade anyone in the family to have any contact with Rosemary. (The latter condition was actually standard for anyone institutionalized, as it was felt that contact with their family would be too much of a stress on the person institutionalized.) 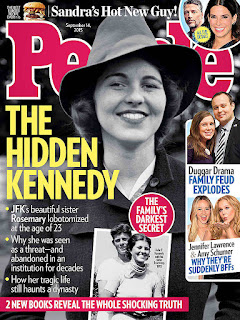 It was thus only after Joe became incapacitated from a stroke that the rest of the family learned about Rosemary, as Sisters of St. Coletta, the institution that was caring for Rosemary, needed coherent instructions from an immediate family member. It was shortly after Joe’s death that Rose was reunited with Rosemary, which began dramatically, when Rosemary screamed and pounded on Rose’s chest as she expressed her feelings about not being able to see her family for two decades, but which then settled into a peaceful relationship, one where Rosemary was able to socialize with others, and which resulted in a positive change in her personality as well as a modicum of a regular life. It was also during this time that she formed a close bond with her siblings, Eunice Kennedy-Shriver and Ted Kennedy.

It was after reconnecting with Rosemary that Eunice Kennedy-Shriver began the Special Olympics, as she realized that people like Rosemary weren’t as healthy as normal people because of their relative lack of exercise. Ted Kennedy likewise began lobbying in the Senate for legislation to aid those with a disability after reconnecting with Rosemary. Eunice’s son, Anthony, also became involved when he set up Best Buddies, which pairs able-bodied students with the disabled.

Elizabeth revealed that Rosemary was “a knockout” when she was younger and maintained a striking appearance throughout her life. Rosemary loved ice cream, dancing, music, eating out, dressing up in pretty clothes and roses.

Elizabeth is a writer and is also in a dream group, which studies dreams. It was after she had a dream after asking, “What book should I write next?” that she decided to write the book, after a great deal of initial personal reluctance, particularly since her own family had had experience with mental issues (Elizabeth’s uncle Nick suffered from depression, while her aunt Zora suffered from schizophrenia). She eventually decided to write it by staying true to who she and Sister Paulus were, attempting to empathize with everyone involved, and in the course of her research learned that the younger Kennedy generation, such as Anthony, were curious about their Aunt, and this encouraged her. Writing the book was an emotional process for Elizabeth, admitting that she cried as she relived the tragic moments of Rosemary’s life. The process has also made Elizabeth more empathic, more aware of others’ circumstances and actions. 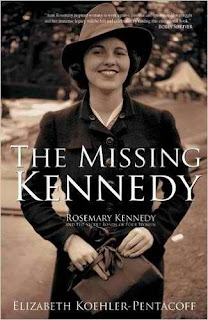 Elizabeth loves reading, writing, being in Nature and events with family. She would also like to travel and visit the various Presidential libraries (she already visited the John F. Kennedy Library and Museum during the course of the research for the book). She feels that family history is exceptionally important, as it helps explain who we are and how connected we are with each other, and that people should look into their own lives for stories.

Elizabeth would like others to know that ordinary, everyday people could create extraordinary things through small acts of love and kindness, and that empathy is “the way to go” with anyone who is different. She is presently working on a middle-grade novel, a picture book and an idea for a novel in the works.

Elizabeth Koehler-Pentacoff’s website for her book, The Missing Kennedy, is missingkennedy.com.

Purchase on Amazon: The Missing Kennedy
Posted by alvinwriters at 6:55 AM