Uma Girish talks to Alexander “The Engineer” Lim, host of AuthorStory by alvinwriter.com about her latest book, Losing Amma, Finding Home: A Memoir About Love, Loss and Life’s Detours.

“The treasures in our lives are buried in the traumas.” ~Uma Girish 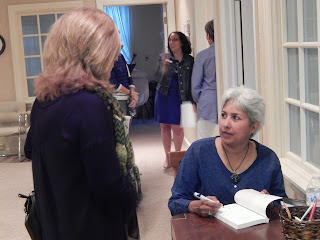 Uma had always been a storyteller since she was a child, and it was no surprise that she loved reading books. Even from a young age, she would write essays, and in those times when her father would give a cash prize to the best essay written by one of his four children, she would invariably win the prize, much to her siblings’ dismay. Those beginnings have led her to writing short stories and essays which, as of today, have been published in seven countries and which have won her several awards.

Uma taught business English in India, and her plan, when she and her family relocated to Chicago in the first half of 2008, was to teach English as a second language. Given that the economy wasn’t good at the time, she was forced to take part-time jobs, since there were no openings at the jobs she wanted.

It was in January, 2009, she learned that her mother had cancer - a disease Uma’s mother would die from in eight months’ time. Prior to her mother’s death, she admitted that she was a “normal person” in that she was concerned with raising a family, going to work, paying the bills and such. The news, the subsequent period of dealing with cancer, and her mother’s subsequent death plunged Uma into despair, but it was from that experience that she was “reborn” into the person that she presently is.

Uma remarks that she had three questions that needed to be answered after her mother died: 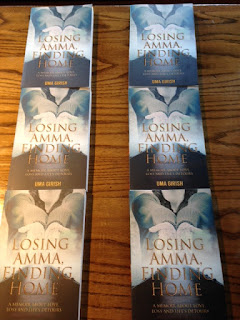 Who am I?
What is the meaning of this life?
What am I meant to do with this life?

It was in the process of finding out the answers to these that Uma realized that her purpose was to serve others.

Uma noted that nobody knew how to deal with grief, and dealing with the effects of her mother’s loss, as well as the subsequent loss of her father over a year later, gave Uma an understanding into what grief was, through her actually venturing into that territory and getting in touch with teachers who could help her out and heal herself. At that time as well, she came in contact with people who were, like her, at a crossroads in their lives, and it was through that process that Uma realized that helping others deal with grief was her calling. She spent two years after her father’s death undergoing what she called an “apprenticeship” in dealing with grief, which healed her. Since then, she has since become a Grief Guide and a Bereavement Volunteer at a hospice, reaching out to others and guiding them through their time of grief.

One of the things that helped Uma out greatly through the experience was that she had kept a highly detailed journal throughout the course of her mother’s illness, which provided a lot of detail that helped her write the book out. Uma notes that journaling gave her a good way to express herself and to get all her negative emotions out of her system as well as to see her progression through the process, and because of this Uma requires that all with whom she works with during her grief counseling maintain their own journal.

Another thing that helped Uma out through not only her mother’s treatment and the stresses attendant to relocating was her service in her part-time work at a retirement community. It was there that she encouraged seniors to tell their stories, which she found new and fascinating, as she didn’t grow up in the United States. She would type up these stories onto a website, and as she did so she realized that the themes of loss, pain, forgiveness, separation and betrayal are common to human beings.

At the time just before she wrote the book, Uma was between writing projects and thinking about what to do next. Uma focused on the writing, and it was after she received the contract for its publication she realized that the story in her book was bigger than her own personal story, as it dealt with grief and loss, which, she mentions, are common aspects of the human experience, and that people from around the world could get something from the book and connect with the story intimately.

Uma notes that grief is a universal experience, rather than the isolated, personal experience that people think it is, and that, in this moment, there are millions of people around the world who are experiencing grief. She then challenged people to what they can do, to reach out to others who are likewise feeling grief, and to help them better get through their own experience. 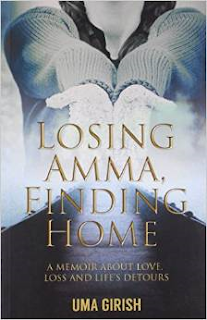 Uma believes her story is global, and that her book can touch people throughout the world. She encourages people to see, after reading the book, what threads of her story resonate with themselves and their experiences. She is presently working on her next book, which is a collection of essays about life and life’s lessons.

Uma loves to read and hates to shop, admitting that the way her husband shops is more like how a woman does compared to herself. She hopes to be able to conduct teacher workshops on a cruise in the future, as this is on her bucket list.

Uma Girish’s website for her book, Losing Amma Finding Home: A Memoir About Love, Loss and Life’s Detours, is umagirish.com. It is also available on Amazon, and in both paperback and Kindle versions.

Purchase on Amazon: Losing Amma, Finding Home: A Memoir About Love, Loss and Life’s Detours
Posted by alvinwriters at 8:00 PM