Dr. David A. Salomon on The Seven Deadly Sins and Their Influence in Society from the Middle Ages to the Modern World

In this interview, Dr. David A. Salomon talks to Alexander “The Engineer” Lim, host of AuthorStory by alvinwriter.com, about his book, The Seven Deadly Sins: How Sin Influenced the West from the Middle Ages to the Modern Era.

“Our buying into anything that is technological and fast has gotten in the way of our ability to engage in reflection and contemplation, which are important parts of human existence.” ~Dr. David A. Salomon 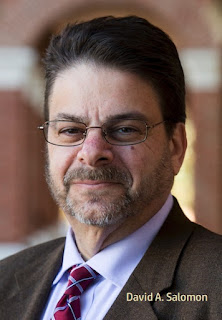 As a Jewish child, sin was more of a generic concept than anything else, as it was part and parcel of his religious education. It was only when he was in college that he encountered the “seven deadly sins,” and he delved into it as part of his work on doing research on Christianity and religion, particularly in the Middle Ages and the English renaissance. He is presently involved in a research project comparing the concept of “the self” as proposed by St. Augustine in comparison with that same concept as proposed by Carl Jung, noting that, starting from around the 20th century, people have shifted from looking at sin as a religious concept to looking at it from a more secular concept.

The Seven Deadly Sins sprang from a year of research and another year of writing it out. Dr. Salomon originally didn’t intend to write the book, but the seed of the book began when the editor of a previous book he had written gave him a list of subjects for possible books that they were looking for. One of the subjects was a history of sin, and while Dr. Salomon originally said “no,” he changed his mind after re-reading a scene of St. Augustine’s Confessions.

The “Seven Deadly Sins” was actually codified, as a concept, by Pope Gregory the Great in the 4th century and was based on previous lists of sins which go back centuries before. The seven deadly sins are (in no particular order):


Dr. Salomon points out that the seven deadly sins are actually excessive behaviors, such as gluttony being excessive eating and drinking, as people do need to eat and drink to survive. He remarks that the definitions of the sins haven’t changed, but the context by which people regard these. Dr. Salomon points out the sin of gluttony in the context of excessive input of anything into one’s body, which would include being overloaded with data and being glued to electronics for a great amount of time.

The impact of the list being put together, according to Dr. Salomon, was that the Roman Catholic Church was able to use the sins as a way to control people’s behavior. It was only during the Reformation and after the Renaissance, with the invention of the printing press which made the Bible available to a larger audience, rather than merely to members of the Church, that people began to make decisions for themselves, based on what they had read. This has moved the conversation of responsibility for behavior to the individual, which became the norm in the 20th century.

Dr. Salomon remarks that, under the present context, the sins can be viewed from a spiritual, rather than a religious, sense, so that an individual can take sin into consideration without necessarily belonging to a religion. This movement is more prevalent in the Western world than anywhere else, and stands in stark contrast to the way sin was viewed as a “black and white” issue in the Middle Ages. This opens up the context of individual interpretation, which Dr. Salomon remarks could be potentially dangerous in society, and has created an atmosphere where assessing what is right and what is wrong is more difficult.

Dr. Salomon notes that there is presently a split in attitudes where the Western and Eastern cultures are concerned. Western people look externally for assessment and approval, as can be seen by the concept in Christianity, Judaism and Islam as looking to God as an external force. Eastern people have more of a sense that God resides within an individual, which leads to reflection about one’s own behavior rather than looking to an external standard. He notes that Eastern traditions do have their own lists of sins which are different from the seven deadly sins, and that these are looked at differently compared to how sin is regarded in Western traditions. 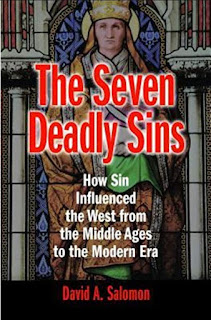 Dr. Salomon notes that a lot of Westerners might believe in the concept of sin, but they can’t really define what sin is, as it has become more personal and less communal. Sin, Dr. Salomon noted, was originally about committing an act which was a violation of the covenant made between God and man, and that that developed into a violation of a covenant made amongst people where acceptable behavior is concerned. He notes that actually writing out a full history of sin would take more books, and that nowadays, behavior is being re-categorized, with the example given being the #MeToo movement.

For Dr. Salomon, the impact that technology is having on sinful behavior was one of the most interesting aspects he encountered while writing the book, and he includes references to how technology negatively influences people’s lives. According to him, technology is presently getting the way of our humanity and of how we relate to each other, which he believes Gregory would include as a sin if the kind of technology presently available was present during his day.

Purchase from Amazon:
The Seven Deadly Sins: How Sin Influenced the West from the Middle Ages to the Modern Era by Dr. David A. Salomon