In this interview, Betty Ann Besa-Quirino talks to Alexander “The Engineer” Lim, host of AuthorStory by alvinwriter.com about her book, My Mother's Philippine Recipes: Filipino Cookbook Recipes from Asian in America.

“It’s always about trying to make a difference in somebody’s day, somebody’s life, or in the community.” ~Betty Ann Besa-Quirino

As a child, Betty Ann had heard her mother say that she wanted to write a cookbook for her friends, with Betty Ann recalling that the way her mother taught others to cook was instructional, in a way that her mother hoped was inspiring, as well. The family house of Betty Ann’s childhood was located in Tarlac City in the province of Tarlac, in The Philippines, along the highway, and as Tarlac was halfway between Manila and Baguio, her parents’ friends - literally busloads of them - would often drop by on trips between these two cities. Betty Ann remembers well the energy and excitement of the preparations, as well as the usually two hours’ worth of camaraderie and bonding that resulted whenever everyone sat down for a meal. She also remarked that her mother essentially got her basic recipes from her own mother, who got these from her own mother, the latter being from Spain, and that her mother was good at using whatever ingredients were available on the family farm for their dishes. Betty Ann thus wrote My Mother’s Philippine Recipes in her honor, remarking that she lived out each ingredient and dish in the book in her childhood.

When she and her family relocated to the United States, Betty Ann wanted to reduce the stress related to the move on her family, and one of the ways she did this was by cooking Filipino dishes, to give her family a sense of contact and familiarity with their past, despite the fact that the ingredients she needed weren’t readily available back then. Her sons have maintained the tradition of cooking Philippine dishes, with Betty Ann noting that “they cook better than me, now,” and that they now teach her new recipes. Her eldest son experiments with different types of cuisine and holds supper clubs, where he sells tickets for people to sit down to a dinner with dishes that he cooks, and as an indication of this, Betty Ann remarked that her son recently cooked so much paella that it needed to be held in a container the size of a Filipino batya (essentially a large, deep bowl roughly two feet wide and eight inches deep). Betty Ann’s youngest son, on the other hand, prefers to cook for himself. Betty Ann also notes that her sons combine their interest in wellness with their cooking, and that Filipino food isn’t always the greasy and unhealthy stereotype.

According to Betty Ann, while there is no single dish that could be identified as representative of Filipino cooking, what distinguishes Filipino dishes is the harmonious mix of various flavors and textures which are combined in a single dish. One example of this, according to Betty Ann, is lumpiang shanghai (commonly known in the US as an egg roll), which is a basic dish with a wide range of flavors and textures and which is the dish that Betty Ann uses as an introduction to Filipino food for those who haven’t yet tasted it. Betty Ann remarks that, when she goes to a get-together with friends, the lumpiang shanghai she brings along is gone within ten minutes. She also gave as an example someone who dismissed her lumpiang shanghai as “same ole same-ole egg rolls” and the person involved, after tasting them, got “hooked” so to speak. She also gave sinigang as another example of the successful interplay of flavors and textures. She remarks that Filipino food is getting more recognized nowadays due to social media, and notes that the food itself will evolve as time goes on. 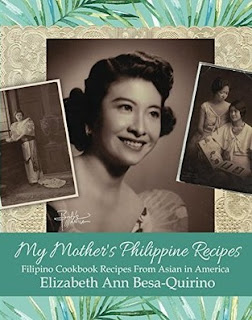 When it comes to traveling and getting information on new cuisine, Betty Ann likes to listen to the stories told by newfound friends as, within those stories, there is usually a recipe to be found. At present, Betty Ann would like to explore Japanese cuisine more, as she is interested in the methods and techniques to prepare dishes, as well as the dishes’ flavors and appearance.

Betty Ann remarked that, as a writer, she loves to tell stories and create pictures with words, as well as to help inspire others. She always thinks of ways to reach her audience, and to make other people’s life better through her cooking. She thus recommends knowing whom one is talking to and trying to find out how to make their day better.