Cheryl Krauter on Surviving the Storm of Cancer

Cheryl Krauter talks to Alexander “The Engineer” Lim, host of AuthorStory by alvinwriter.com about her book, Surviving the Storm: A Workbook for Telling Your Cancer Story.

“Have a lot of compassion for yourself, because you deserve it.” ~Cheryl Krauter 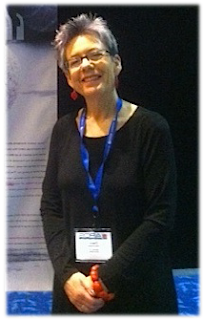 Cheryl has been a Existential Humanistic psychotherapist for nearly forty years, and as such focuses on the whole of the person, particularly a person’s potential and drive for authenticity, when dealing with their concerns, rather than just parts of the person. She had been diagnosed with breast cancer in 2007, and the cancer she had was very aggressive, as it infected her lymph nodes as well, which is are vital for the body’s immune system’s functioning. Cheryl noted that her diagnosis came as a complete shock to her, and as she had been practicing meditation for as long as she has been a psychotherapist, she acknowledged that both her training and her meditating helped her through the process.

Cheryl notes that the definition of “remission” depends on the source, but that her own survivorship began when her scan was clear of cancer, and she notes that a lot of people, even though they had been diagnostically cleared of cancer, don’t feel that they are in the clear for quite some time. Cheryl also notes that the most prevalent concern of cancer patients, based on surveys they complete, is that of living with uncertainty. She notes that there is a growing number of people who could be afflicted with the disease, particularly with the ageing baby boomer population, and that one out of two men and one out of three women will get a cancer diagnosis within their lives. Cheryl remarks that the methods of detecting and treating cancer have become more sophisticated, which improves the chances of survival, and that the most common types of cancer are prostate, breast and lung cancers. Where age is concerned, Cheryl notes that cancer is more easily managed when the person who is diagnosed with it is elderly, compared to those who get cancer when they are in their prime.

Cheryl remarked that, had someone told her, ten years ago, that she would be involved in treating cancer as a psychotherapist, or that she would have written a book around the topic, she would have doubted it very much. That said, she wrote Surviving the Storm out of her own experiences with cancer and the realization that not everybody who has cancer, had cancer or was close to someone who has or had cancer has a venue through which to express themselves and their stories about the impact the disease has on them, and thus discover who they are. The book came out of her own needs and wants, and offers a narrative structure to enable survivors and those in the community around the patient to express what they are going through. Surviving the Storm came out of both Cheryl’s realization for the need for such a book, and she also had to think long and hard about remaining involved with cancer, and the time came when she finally decided to write it. The writing process itself was challenging and also gratifying, and Cheryl remarked that she has an image of a pair of hands, other than hers, holding her book, which she takes to mean that the book is no longer hers and now belongs to others. 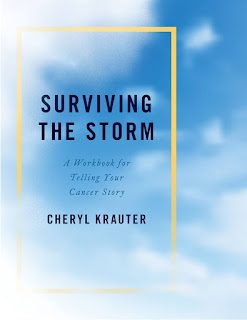 Cheryl remarks that giving up hope is one of the worst things one can do, and that someone diagnosed with cancer being told, “You have to fight or you’ll die” could create stress and pressure in that person which would exhaust that person and hinder the healing process. She notes that the best thing people can do is to be supported or to give support to the person who is diagnosed with cancer, as those who are totally isolated find the going to be difficult. Cheryl also remarks that just sitting right next to someone with cancer and asking them, “Tell me how you feel” is a big deal.

Cheryl remarks that people should give themselves room to feel what they feel, and that what is going on is just where they are, in a situation that is neither negative or positive. She also complements those who live with cancer for putting one step in front of the other,

Purchase from Amazon: Surviving the Storm: A Workbook for Telling Your Cancer Story by Cheryl Krauter