Monica Burch on Speedy's Strength, a Children's Book about a Fighting Fish

Monica Burch talks to Alexander “The Engineer” Lim, host of AuthorStory by alvinwriter.com about her book, Speedy's Strength, a children's book about a little Fighting Betta Fish.

“When you have to develop, it takes a little time and effort.”
~ Monica Burch 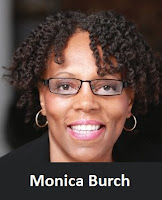 The concept for Speedy’s Strength actually began several years ago, when Monica’s oldest son brought home a Betta Fish from his school to look after (“fish sitting,” in Monica’s words). Monica found Betta Fishes to be an interesting species and began writing a story based on that. The story grew as the years went by, with Monica telling her son these so often that her son began to complain about hearing about the fish yet again, and one of the interesting plot elements of the book - changing environments, and the possible changes in personality with this change - came about when her son changed schools. Where the main character is concerned, this change was from the somewhat freewheeling kind of fish, who did things differently before he was captured and put into a fishbowl, back into what he was bred to do, which was fight other fish.

Monica’s target readers are pre-kindergarten to third grade and she also wrote the book essentially for parents to read to their children. She remarked that it was written in such a way that people can pick up different stories or lessons from it, with one of the lessons being that one has to work to get what one wants, and another being that one needs to work on oneself to develop oneself, and yet another being that one can change one’s nature if one really applies oneself to doing so. She admits that she was influenced by her sons’ experiences in making the book, such as when she included a section on Speedy training after reflecting on her son’s training in the sport of fencing.

According to Monica, Betta Fishes are beautiful looking fish that have been bred by humans to fight, and there is a short section at the back of the book that gives more information on the species itself. She found it interesting that only one Betta Fish can be kept in a fishbowl at any one time, because of their aggressiveness, but in the wild they can coexist with other fish species. She admits she made a Betta Fish a protagonist because she liked such fishes a lot, and that she originally intended to write a fun, information-based book on Betta Fishes, remarking that she could have included a lot on technology in it had the book turned out that way. 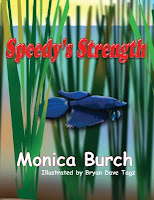 Monica has two other Speedy stories possibly in the works, with one being a prequel of Speedy while he was with his family, before he was captured, and another where Speedy encounters a Robotix Spider Robot. She also wouldn’t mind seeing Speedy as a cartoon franchise character, remarking that such could teach important lessons to children, and hopes that it can be around for decades due to this.

You can find Monica’s book, Speedy's Strength, on amazon.com, and can contact her at constructu@gmail.com.

Posted by alvinwriters at 5:37 AM