Tony Fairfax talks to Alexander “The Engineer” Lim, host of AuthorStory by alvinwriter.com about his book, The Presidential Trend: The Remarkable Voting Predictability of the Office of President (Includes: 2016 Election Analysis).

“I was forced to, compelled, to come up with my own theory on this because no one had written about it.” ~Tony Fairfax, on writing The Presidential Trend 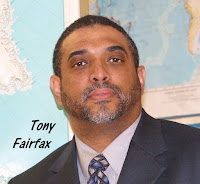 Tony started out as an electrical engineer who worked for a manufacturing company and an engineering consulting firm, and then became an entrepreneur, starting a business with a few other people during a recession period in the US economy. After the business closed down, Tony, as a consultant, connected with a local university and was involved with a redistricting project, which is one wherein political boundaries are redrawn throughout the United States. This began his career as a mapping and demographic consultant, which is what he is doing up until today as an expert whose testimony on demographics is recognized in federal courts.

Tony’s interest in the presidential trend he writes about began when he read a census report that had a graph that led to his investigating the topic. The major trend he talks about is the increasingly linear trend of popular votes for the Democratic presidential candidate from 1972 to 2000, despite the voter turnout percentage differing from election to election, while during that period, the popular votes for the Republicans and independents combined fluctuated. Tony remarks that, after investigation, the trend actually began in 1968, when the electorate "fractured" between Democrats and non-Democrats, and that the trend makes sense when core base voters - voters who would vote Democrat, Republican or for their candidate, no matter what - are considered. This increasing linear trend, according to Tony, is due to the increasing population of Democratic core base voters and generational perpetuation of loyalty to the Democratic party.

In 1968, a certain section of Democratic voters peeled away from voting for a Democratic president, and this section never came back to vote for a Democratic candidate except during 1976, which is a year that doesn’t fit the 1972 - 2000 trend. 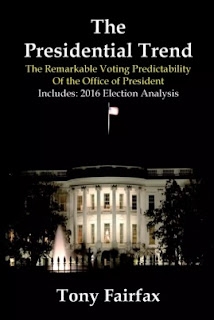 Where the Republicans and independents are concerned, a trend doesn’t exist but a mirroring type of voting pattern does. Mirroring occurs when, say, a hundred people vote for two candidates, and if all of them vote, and if one person gets 70 votes, the other person will get 30 votes. This mirroring comes from the non-Democratic party voters and means that, if a Republican candidate gets a lot of votes, the independent candidate will get fewer votes, and vice versa. The only time this mirroring didn’t happen was in the 1992 election, due to then-candidate Ross Perot being unable to make inroads into the Republican core base voters.

Tony notes that the linear trend might have stopped at 2000, but he says that there is still a trend in the form of the Democratic popular vote percentage, which deviates only around 2.6% from the trend line. The trends are more visible at the national level, and while these exist at the state and local levels, these aren’t as visible because people change locations, from city to city or from state to state, throughout the year. The Democrats, because they have most of the so-called minority vote, have an advantage in the coming decades because of the increasing percentage of the minority population in the United States. 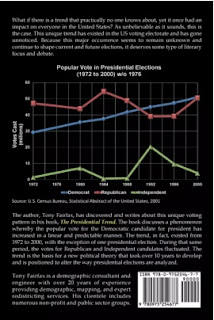 The journey Tony took while writing the book was one wherein his original hypothesis, that the trend was disrupted by the war that took place in 2000, was proven mistaken and made him focus on the role of demographics and base voters where the trend is concerned. He also notes that the journey is still ongoing, which could be the potential topic for another book. He had actually came up with a companion book to The Presidential Trend which is a condensed version for individuals to be able to grasp all of the features of the trend in one or two reading sessions.

Tony Fairfax’s book, The Presidential Trend: The Remarkable Voting Predictability of the Office of President (Includes: 2016 Election Analysis), can be found on amazon.com and other major online bookstores.

Purchase on Amazon: The Presidential Trend: The Remarkable Voting Predictability of the Office of the President (Includes: 2016 Election Analysis),
Posted by alvinwriters at 3:15 PM