Poonam Dhandhania talks to Alexander “The Engineer” Lim, host of AuthorStory by alvinwriter.com about her book, not just The Small Book of Meditation. 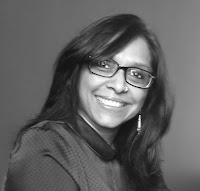 Poonam Dhandhania has been counseling people for the past eleven years and has been working with recovering drug and alcohol addicts for the past five years. She had also been practicing meditation for the past fifteen years, she experimented with various types of meditation, such as OSHO meditation, and also investigated various kinds of healing, such as Reiki and the Silva Method, and has recently investigated clinical hypnotherapy and clinical sound healing. She used the knowledge she learned to work with recovering addicts, and, as she was doing so, was encouraged to write a book on inner healing, which resulted in not just The Small Book of Meditation, which not only deals with meditation but also deals with forgiveness, letting go of anger and becoming more aware of one’s own thoughts to asses which things need to be released.

Poonam described three of the methods that she uses, and which she explores in her book. Reiki is the first method she learned, and this system is involved with the energy of life and how one becomes a channel for this and thus effect healing, both in close physical proximity and in distant physical proximity. The Silva Method emphasizes using the mind to enable a practitioner to manifest things in one’s life, and this includes visualizing reaching one’s mental alpha level of brain activity, which is the level which meditation strives to achieve. NLP, or Neuro-Linguistic Programming, revolves around enabling one to program one’s thoughts so that one can, through control of thoughts, achieve one’s personal desired level of success.

The healing in the book is intended for oneself, or how to reach a better understanding and awareness of oneself to lead a life with better relationships with not only oneself but with everyone else. Poonam went the route of traditional publishing, sending out e-mails to publishers, and in this respect she was successful in landing contracts with two publishing companies - Omji Publishing House in India and with GMTA Publishing in the United States. She admits that she published the book because she wants to help others, and any monetary benefit to her would be secondary in nature.

Poonam notes that “I don’t have time” is the first thing that pops into peoples’ heads when it comes to meditation, particularly when it comes to dealing with the busy nature of modern life, and she also notes that all it takes is five minutes to just sit down and center oneself so that one can recharge one’s batteries, so to speak, and thus become better at work and in one’s life. Poonam also mentioned that there are two kinds of yoga - the yoga of the body, which includes breathing exercises, and the yoga of the mind, which is what Poonam deals with. Poonam also notes that meditation is not about stopping one’s thoughts but becoming aware of these, and that regular practice of meditation will eventually enable one to achieve a meditation where no thoughts are present. 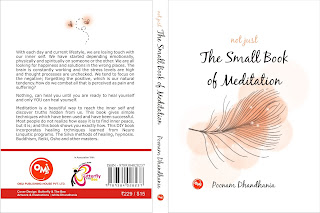 In addition to healing, Poonam is also excited about life in general and is always happy to try out new things. Never the party girl, she focuses instead on a cause which she espouses, and that is to help others. Poonam Dhandhania’s website is www.poonamdhandhania.com.

Purchase on Amazon: not just The Small Book of Meditation
Posted by alvinwriters at 6:09 PM

Email ThisBlogThis!Share to TwitterShare to FacebookShare to Pinterest
Labels: alvinwriter.com, author interview, AuthorStory, being a writer, being an author, books, inspiring story, not just The Small Book of Meditation, Poonam Dhandhania, writing inspiration