In this interview, Anthony Brinkley talks to Alexander “The Engineer” Lim, host of AuthorStory by alvinwriter.com, about his book, You Can't Run Away from You: Journaling the Rise to Manhood: Volume 1.

“Vulnerability is not weakness, but is actually strength on display.” ~Anthony Brinkley 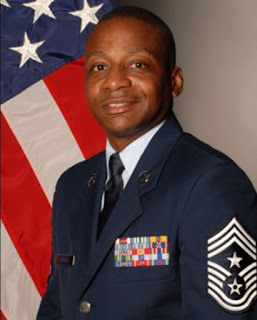 Anthony had a challenging childhood growing up, experiencing such things as being needed to be treated for tuberculosis at the age of five and having a gun pulled on him in first grade. His life was “kind of a mess” until he decided to turn it around, during freshman year in high school. Anthony acknowledges that school wasn’t a priority with his family, and he hung out in his freshman year with seniors who didn’t need to show up. Not surprisingly, he “racked up” F’s, and the time came when his report card came in and he became alarmed enough with all his failing marks that he made a deal with God - that he wouldn’t “screw up again,” if he wasn’t kicked out of school. He would have been so kicked out had he got four F’s; as it was, he got three, so he stayed in. Another motivator for him was seeing the pain his mother felt when Anthony’s own brother didn’t pass high school, and he didn’t want to hurt her any more than possible.

Anthony remarks that: “I didn’t know God, but God knew me,” adding that this truism showed up in his life with all the people who showed up at moments in his life when he needed them, such as his uncle Adolph who gave him jobs to keep an eye on him as he grew up - people who helped him become “a better version” of himself.

Anthony noted his family’s 18th birthday tradition of driving home the point that, from then on, one had to provide for themselves, and it was around then that he joined the Air Force. He served for 28 years, underwent 14 major moves and led around 100,000 people. Anthony notes that all Air Force installations are essentially small cities in themselves, which means that just about any job present in society can be found in the Air Force. He also notes that people don’t pick the people they work with, emphasizing this with a story that he once told the people he worked with that anyone out to kill them didn’t care if they were Christian, Jewish, Muslim, white, Asian or Hispanic - they were out to kill Americans, period. He thus emphasized his people treating each other with respect and as a team.

Anthony achieved the rank of E-9, the rank of Command Chief Master Sergeant, which is the highest rank possible for enlisted personnel. This meant that he had around as many responsibilities and commanded as many people as a commissioned officer. Anthony notes that non-commissioned officers - NCOs - are the ones to translate the directives set down by officers to the enlisted personnel, who are the ones who actually do the work that needs to be done. His work, as an E-9, was to lead his fellow sergeants under his command, and gave him an opportunity to serve others.

Anthony admits that he pushed people away, because of the events he experienced in his childhood, and his stay in the Air Force forced him to face up to such events, as he needed to engage with others as part of his work. “True growth and true connectivity, intimacy, is connected directly to vulnerability,” he remarks. He also notes that half of learning is learning, while the other half is unlearning what was taught wrong - the latter being something which people don’t work on. In his opinion, someone who operated by the principle, “Fake it ‘til you make it” is someone who won’t remember who he or she really is once they reach a level of success. “Face it until you make it,” he advises. 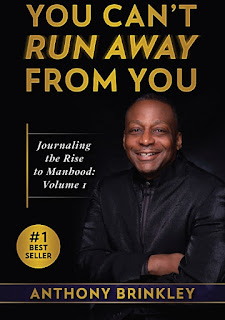 According to Anthony, 50% of Americans experience some sort of trauma before the age of 14, and 75% experience trauma by the age of 24, and he remarks that it’s impossible to move ahead in life without dealing with the effects of such trauma, in order to create “a more cohesive individual or group.” He also notes that the United States has around 5% of the world’s population but also consumes 85% of psychotropic drugs consumed worldwide, which is, as he notes, is a disjunction, as it is unlikely that 5% of the world’s population holds 85% of the world’s pain. In his opinion, Americans are taught to run away from pain, but as he notes that one cannot heal if one hides from pain. (This is something he knows from experience, as alcohol was his choice of pain numbing substance.)

“All a crisis is, is a bunch of data,” Anthony notes, and how it is determined to be good or bad depends on how one reacts to it. The true tests in life, he says, using a school analogy, are not the scheduled tests but the pop quizzes. He thus works with people to ready for any such possible pop quizzes in life by helping them learn about themselves, so they can overcome such crises. As a pop quiz isn’t a final exam, one can study where one went wrong and then learn from it and carry it forward, Anthony adds.

Anthony admits that he would have been a “horrible employee” because he had an independent perspective on things, and this was what drove him to start his own business once he left the Air Force, and he found mentors along the way who taught him how to run a business, which enables him to help others become themselves. 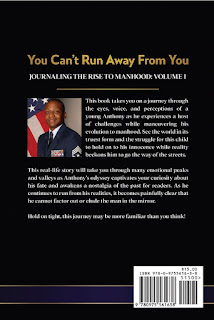 You Can’t Run Away from You started out as a private journal for Anthony and Volume 1 covers the first 19 years of his life, and covers a lot of topics. He notes that there are likely two more books which will come out. In his opinion, his wrote it so that his book is about life, rather than himself, so a reader can remember and recall an incident in their own life which makes such a story real, so that they “stop seeing” Anthony and see themselves.

Anthony advises people to accept help from the people around them, as he, himself, is living proof of how far one can go by doing so. “Fight for the life you have, and you’re here to do something special,” he notes, “even if you haven’t realized it. Make the rest of your life the best of your life.”

Purchase from Amazon: You Can't Run Away from You: Journaling the Rise to Manhood: Volume 1 by Anthony Brinkley

Posted by alvinwriters at 1:32 AM

Email ThisBlogThis!Share to TwitterShare to FacebookShare to Pinterest
Labels: alvinwriter.com, Anthony Brinkley, author interview, AuthorStory, being an author, books, inspiring story, Journaling, Rise to Manhood, writing inspiration, You Can't Run Away From You