In this interview, Maria Espinosa talks to Alexander “The Engineer” Lim, host of AuthorStory by alvinwriter.com, about her novel, Suburban Souls.

“Go with your instincts. Believe in yourself.” ~Maria Espinosa 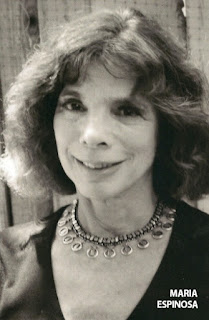 Maria Espinosa was actually born Paula Cronbach, of Jewish parents, but she admits she never felt at home with her given name. She felt more attuned to the name “Maria,” so when she got the opportunity to change her name, she did so.

Writing was something that Maria had strongly felt that she had wanted to do, even though she didn’t particularly want to write. While she wrote throughout high school, she really got into writing when she wrote out a journal during a difficult time in her life, while she was in college. She began writing stories for her friends while still in high school, and she got started by self-publishing books of her poems. Her first novel, Dark Plums, came out when she was in her forties, published by a press that she had started with some female friends, and this was picked up later on by a Hispanic publisher, whose people thought she was Hispanic, due to her name being what it was.

Maria notes that she follows the advice of Woody Allen, who says that writers should sit down and actually write, and that she also reads and sets a schedule for herself - something which, she admits, is something she finds somewhat challenging, particularly now that she’s gotten older.

Where her books are concerned, Maria remarks that her first two novels are semi-autobiographical, in that the emotions that are written about in the book are essentially her own. She also noted that the character of a Jewish man who appeared in Dark Plums was a character who she didn’t originally intend to become a main character, and that that person was someone who, later on, she would meet and who would become her second husband.

Where writing is concerned, Maria notes that doing so has enabled her to become more aware of other people, as she needs to inhabit a character fully, to know that person’s feelings, emotions and motivations, when she writes. This, in turn, enables her to understand more about herself, and when she looked back over what she wrote over the years, she notes that those writings reflect the changes she has experienced throughout her life. Writing also enables her to explore her own emotions, as she notes that a writer’s own emotions become part of the story the writer works on.

Maria is also not slowing down, despite presently being 82 years old, as she is presently writing out three novels as well as a non-fiction book on homeless people whom she interviewed - a process she describes as being something similar to “a bird building its nest.” 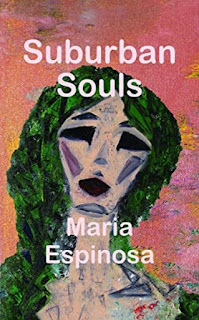 Maria remarks that she knows Holocaust survivors and how living through such an experience affected them and continues to affect their lives, which is how she was able to accurately portray the character of a Holocaust survivor in Suburban Souls. She also knows people who lived in dysfunctional marriages, including those where at least one of the partners ignores the other, and this also served as the model for the protagonist’s marriage in the novel.

Maria notes the adage, “Youth would and age could,” remarking that, if she had the confidence she presently has now while she was back in her twenties, doing so could have saved her “a lot of heartache.” She also advises people to follow a quote she once heard: “Don’t let other people tell you who you are, tell other people who you are.”

Posted by alvinwriters at 4:55 PM