In this interview, Robert Hardaway talks to Alexander “The Engineer” Lim, host of AuthorStory by alvinwriter.com, about his book, Saving the Electoral College: Why the National Popular Vote Would Undermine Democracy.

“We've been through this so many times in our history, it's kind of become old hat.” ~Robert Hardaway 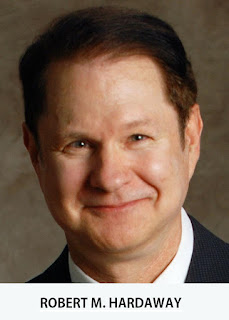 Robert was in government class in high school, where a member of Congress would talk on a particular current topic, after which the class would be split into two parties, with Robert being the head of one party and Al Gore (who would later become the 45th Vice President of the United States) to debate the issue. The electoral college was one on such topic covered, and since then Robert has spent time as an attorney in the US Navy’s Judge Advocate General corps and as an assistant district attorney in Colorado. He has also spent the last 40 years researching on the electoral college, culminating in several books and articles on the topic.

According to Robert, the electoral method is enshrined in Article 2 of the United States constitution, where the legislature of each state will select a certain number of electors who will cast their vote in the electoral college. This system, Robert notes, is very similar to that of parliamentary democracies, such as the United Kingdom, except that, in the United Kingdom, the electors are Members of Parliament (MPs). The electoral college is kept separate from Congress (which is designed only to pass legislation), to maintain the independence of the executive, legislative and judiciary arms of the United States government. Up until 1876, state legislators selected the electors themselves, but after that time, the states delegated that responsibility to the people, which is why people vote - for their electors.

An elector cannot be a member of the state government, and can be anyone. Each party puts up a slate of people which acts as electors, and when people go to vote, each party thus effectively tells each voter to vote for the slate of their party, each member of the slate being a member of their particular party who has been nominated by that party to be an elector. Each elector has to be of at least 21 years of age and a citizen of the United States, and their only responsibility is to vote for a candidate in the electoral college. Some states put the names of the electors down, which means that a voter can pick and choose amongst individual electors from both parties, while other states do not so name their electors, which means that each voter then votes for a particular party’s slate.

Each state is guaranteed at least three electors: at least one based on how many representatives that state has in the House of Representatives, as well as at least two electors based on their representation in the Senate. The number of electors posted might vary, but this is based on the principle that each state, no matter how small in terms of population, should have equal representation in Congress. This split, which was proposed by Benjamin Franklin and which was subsequently adopted, between the upper and lower houses of the United States government, with the upper house (the Senate) having one member from each state, and the lower house (Congress) having a number of representatives based on that state’s population. Benjamin Franklin’s proposal was vital as, at the time of the Constitutional Convention, the various states then in existence were in danger of fragmenting and becoming entirely different nations, all of whose economies were nearing collapse and all of whom were squabbling with each other - a situation which was greatly to the advantage of the then-ruling British king, George IV.

Robert notes that, in the present system, when people vote, they do not vote for a party’s president. Instead, they vote for a slate of electors, and it is these electors who actually vote for the candidates concerned. He also remarks that the popular issue is when the so-called “popular vote” does not seem to jibe with the electoral vote.

According to Robert, some states are presently forming a cabal (the National Popular Vote Interstate Compact, or NPVIC) whose members are essentially choosing to ignore the will of the people in their own state by declaring a winner based on a hypothetical popular vote projected from other states - something which, Robert points out, doesn’t exist under the present electoral system. (A popular vote would result in national elections where people write in the name of their candidate, and the winner being declared based on the most number of votes for that candidate.) Robert remarks that such a drive has existed for some time, but it runs into the non-amendable requirement that each state should have equal representation in the Senate. As Article 5 of the Constitution states that the electoral college cannot be abrogated unless all members of the Senate agree to do so, and as the small-population states would want to ensure their continued representation in the government, it is highly unlikely that the move to convert the electoral system from that of the present electoral college to a national popular vote will come into being. Robert noted that this equal representation is the basis of the existence of the United States, particularly since it was because of this that the smaller states joined the Union.

Robert quotes John F. Kennedy as saying: “A popular vote election will increase the likelihood of a president being elected by a minority of the voters. It will break down the federal system in which the states entered the Union, which provides a system of checks and balances to ensure that no area or group shall obtain too much power.” Robert points out that, with a popular vote, a president could be elected from more populous areas, such as coastal cities, with the result that those states or groups which supported the resultant president would get more favors compared to those states or groups which were smaller in population. The electoral college is thus designed to support the Founding Fathers’ ideal of having a president with popular support throughout the nation, rather than from one particular region.

Robert points out that nations which use the popular vote can wind up with presidents that the majority of the population actually reject. He cites the case of France, where, in the 2017 elections, the two better-perceived candidates were nudged out by a margin of 2%, leaving the French voters with an extreme-right candidate and a moderate but most likely ineffectual candidate to choose from, both of whom were supported only by a minority of the population. The French voters were so disgusted by the unwanted choices that over three million of them submitted blank ballots in the run-off elections.

Where electors are concerned, Robert notes that human beings aren’t really needed to be electors, as the individual names of the electors don’t need to be known. This is a housekeeping recommendation he puts forth, with each individual vote going to that of the number of electors in a particular state, creating an automatic allocation of votes. Another recommendation was that governors certify the votes within ten days, and that Congress not need to count the votes themselves. He also notes that, in Great Britain, people vote for a member of parliament who is affiliated with a party because they are assured that the person they voted for will thus vote for a leader that is a member of that particular party.

Robert bemoans that most Americans don’t know what the electoral college is all about, particularly since electors are so elected only once every four years. He also notes that the perception that the electoral college vote doesn’t jibe with the hypothetical popular vote took place in 1888, 2000 and 2016, and notes that this also happens in parliamentary democracies, citing the case of the 1974 election in Great Britain, when the Labor Party won, despite the Conservative Party having the greater number of hypothetical popular votes. 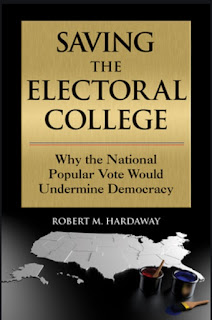 Robert noted that the electoral college is responsible for the two-party system, and mentioned the case of the Socialists in 1932, which had 15% of the American population’s support. The Socialists realized that, despite such support, they couldn’t get an electoral vote unless they had a plurality in a single state, so they went to the Democratic Party and compromised with them to do so. Such alliances ensure broad support for a candidate within a given party.

Robert remarked that he had been called to testify about the electoral college twice. He appeared in front of the Colorado legislature in 2007, which swung the vote against the NPVIC, and again in 2020, as one of over 300 people who wanted to witness at the hearing. He was told he only had a minute, which would have been impossible for him to make a dent in the current for the NPVIC.

Saving the Electoral College: Why the National Popular Vote Would Undermine Democracy by Robert Hardaway

Posted by alvinwriters at 4:02 PM