In this interview, Elke Scholz talks to Alexander “The Engineer” Lim, host of AuthorStory by alvinwriter.com, about her book, Anxiety Warrior.


“If we understand what we’re going through, if we’re aware of it, that’s when we can make changes.” ~Elke Scholz 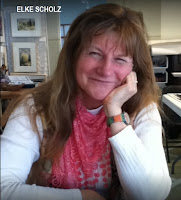 Elke is a certified psychotherapist in both the United States and Canada, and has been practicing for some three decades. She is certified in Eye Movement Desensitization and Reprocessing (EMDR) therapy, which is used effectively to treat PTSD, is research based, and has been used for several years. Elke is also a consultant for expressive arts therapy, and to get her certifications, she needed to get a Master’s degree in psychology. Elke is also very much interested in neuroscience, and while she is also a painter, she thinks of herself more as an author, where her creative passions are concerned.
Elke has always known that creative methods help with the neural pathways of the brain, and she also notes that a great deal of communication isn’t verbal. She remarks that there are other ways of communication, or of expressing oneself, other than in written or visual form, such as moving one’s body, which aren’t commonplace in Western culture. People thus heal and manage what goes on in their lives in different ways, with someone who prefers to move their body dealing with life in a manner different from someone who is more auditory in nature, such as wanting to talk. Elke notes that math and language are interconnected, and she has participated in programs which enabled struggling students to jump grades “within weeks” when creativity was married with education.
The human brain, according to Elke, holds both large and little traumas, and she notes that this, as well as such aspects as attachment, can be influenced by the belief systems one is involved in when growing up. She also notes that any change is a loss, and gives the example of someone leaving to a new community to take on a more exciting job. Elke notes that being aware of such things helps out, with self-awareness being key to managing one’s brain. “You are not your brain,” she remarks, adding that it is the first organ to form, and it collects and manages data from the start, and along with that are thoughts, memories and learning. The brain processes four billion bits of information per second, and it can also generate thoughts which, if one isn’t self-aware, one would think would be one’s own.
“The whole idea is to partner with the brain,” Elke emphasizes, noting that the brain can be trained in different ways to think, noting that the brain generates some 50,000 thoughts per day. The work she does thus helps one master one’s brain, and creativity plays a part in doing so by enabling one to enter liminal space, a place where one is present to the present. In this space, the neural pathways fire in different ways, effectively rewiring the brain somewhat and creating new thoughts which one wouldn’t have been able to think of before, or break old thought patterns which one would otherwise not break away from. This type of therapy enables people to trust their bodies and to tap into their own inner wisdom, thus enabling them to help themselves heal. 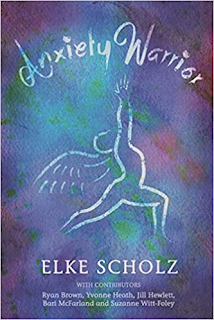 Anxiety Warrior sprang from Elke having her own strain of generalized anxiety, which wasn’t diagnosed until she was in her thirties. This diagnosis, and her curiosity, led her down the path she is now taking, and over the course of the years she not only created several handouts but also felt a bit like “a broken record,” as the people who kept coming to her did so with just about the same symptoms. “We, in North America, don’t have enough resources to help people,” she notes, remarking that people “fall through the cracks” because they don’t have enough money or insurance. After looking at a pile of handouts that she had, she realized that she probably had a book ready, and it was after going to her editor that she and her editor finally fleshed the book itself out.
Elke notes that anxiety comes from eleven different spaces, and that these can be changed within an hour, when the right methods are used. Anxiety Warrior also provides people with a definition of terms for what anxiety is, as well as gives some methods by which people can manage it. That said, Elke remarks that anxiety, on its own, isn’t a bad thing, as it acts to warn us of something that might come up, which would concern us. Trauma, she adds, “comes at the end,” and results in such behaviors as second-guessing and perfectionism. “Life doesn’t dole out stresses evenly,” Elke notes, so both she and the book enable people to create strategies to manage the stresses they inevitably encounter and feel.
Elke shares two words with others: awareness (the more aware one is, the better one can create changes) and practice (figure out what works for oneself).
Purchase from Amazon:
Anxiety Warrior by Elke Scholz
Posted by alvinwriters at 11:04 PM