In this interview, Bruce Olav Solheim talks to Alexander “The Engineer” Lim, host of AuthorStory by alvinwriter.com, about his book, Timeless Deja Vu: A Paranormal Personal History.

“Reducing your fear and increasing your understanding is a good way to go.” ~Bruce Olav Solheim

Bruce has recently begun teaching a course on the paranormal at Citrus College, where he gives a framework for people to understand these activities.  People have been very interested in his course, as Bruce notes that people are desperate for a safe place where they can tell their stories of paranormal experiences. He invites guest speakers to speak in his course and uses some of the frameworks these speakers use, and also defines such terms as mediumship, telekinesis and telepathy. Bruce also speaks on the history of the paranormal, as well as leads the class on events such as seances. He remarks that such a framework grounds people, so that paranormal events and activities don’t come off as freakish or weird.

Bruce remarks that his first book, Timeless: A Paranormal Personal History, was intended to “test the waters,” and that he goes into more detail with Timeless Deja Vu and even moreso with his third, upcoming book, which will be “edgier.” He also is presently planning to come out with a comic book, Snark, which will be illustrated by the illustrator for his books, and its premise is about an alien who travels to the Earth as a scout who is sent out to prepare for an invasion of Earth, and who will then travel around the world and in various times as part of his mission, along the way falling in love with humanity. The project is “very exciting” for Bruce, and he plans to do the ComicCon circuit to promote it.

Bruce’s thesis is that the quantum, paranormal and alien worlds are all one and the same thing. Timeless Deja Vu covers 31 more paranormal events which Bruce experienced, including an event which helps give the book its name. Bruce explains deja vu as being a time where past, present and future all come together, and believes that deja vu provides humans with a glimpse of the quantum world. He remarks that “the present is a moving target,” pointing out that there is no frozen moment where time is concerned, and that this is also the nature of the quantum world. He also notes that, in a subatomic perspective, everything is moving and connected, even though things may feel solid and stationary at the human scale. He also notes that subatomic particles are both particle-like and wavelike, and that we humans create a reality that is familiar to us and which we are taught and trained to believe.

Bruce believes that aliens operate in the spiritual and quantum realms, which enables them to travel the large distances they do. He differentiates aliens from spirits, in that aliens are not native to the Earth, while spirits used to be native to the Earth. He references Michael Masters and his book, Identified Flying Objects, where he opines that some “aliens” are humans from the distant future who are coming back in time to check on present-day human beings. Bruce also believes that there are true extraterrestrial aliens who do come to Earth, and notes that people he has spoken with who speak of alien encounters are down-to-earth people. He also remarks that the US government is coming out with small bits of information about UFO encounters, such as the “Tic Tac” encounter experienced by the US Navy off Baja, California in 2004, and believes that greater disclosure is imminent. Where reasons are concerned, Bruce believes that there are different reasons, pointing out our own, different human motives for traveling and searching, such as tourists, those who are out to conduct scientific research as well as those who would seek to exploit humans for their own gain. He notes that alien technology is so advanced that they could easily take humanity over, if they wanted to.

Bruce confirms that it is possible for parallel worlds to interact with our own, and gives the example in his book where he and his son somehow avoided a potentially fatal accident at an intersection, thanks to his experiencing something along the lines of the kind of “bullet time” popularized by The Matrix film trilogy. He gives this as an example of what he describes as a “fork in the road of time,” and adds that, in a different fork, he and his son could have been seriously injured or killed.

Bruce believes that the sheer number of paranormal experiences that he has had is partially hereditary, as his own mother was psychic. He points out that intuition is paranormal in nature, and that sensing when someone stares at one is the same. Bruce remarks that he is likely to be one of those people who is a “lightning rod” for such activities, in the same way others would be able to throw a ball at 90 miles per hour. That said, he notes that the challenge is about turning off such abilities during such activities as going to parties or even going to sleep, and opines that some people who go mad might do so because they are so perceptive that they cannot do so. 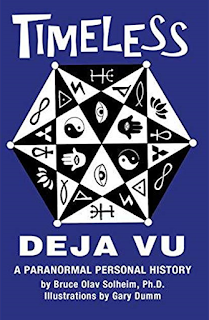 Bruce notes that he believes that there are guardian angels, or spirits who are with all of us human beings in our lives, and that, while these won’t necessarily bail us out if we deliberately go into danger, they could provide their charges with guidance and the occasional push to get things done, as well as intervene subtly. He notes that angels were never human beings, as opposed to ghosts, which are either former human beings who cannot move along the astral pathways, such as being lost on these, or which are essentially things like “tape loops” which just happen over and over again. Bruce remarks that intelligent spirits speak without the personas that we humans all assume, as they are more honest and have nothing to hide. He also remarks that, on ghost hunting shows, the ghost hunters stir up the spirits in the place and leave these still stirred up after they leave, which might not be good for the person who owns the place where the spirits are.

Bruce notes that, just because one doesn’t understand something means that it should be feared, because if one does react with fear, one can start analyzing about what the experience is all about. He remarks that there are charlatans who would take one’s money and run, so people should seek out legitimate people who can help them understand what is going on, if they experienced a paranormal activity.

Posted by alvinwriters at 10:10 PM