Karen Rinaldi on Why It's Great to Suck at Something:and What It Can Teach Us About Patience, Resilience, and Stuff that Really Matters

In this interview, Karen Rinaldi talks to Alexander “The Engineer” Lim, host of AuthorStory by alvinwriter.com, about her book, It's Great to Suck at Something: The Unexpected Joy of Wiping Out and What It Can Teach Us About Patience, Resilience, and the Stuff that Really Matters.

Karen grew up in a household where the parents were loving and was also very laissez-faire, as there was a fear of putting up high expectations. Karen’s driven attitude was in reaction to this environment, which led her to pushing hard to overcome her challenges from school onwards, creating in her a degree of “tenacity and grit” that has served her well.

It’s Great to Suck at Something was over a decade in writing, and it sprang from a conversation she had with her then-eight-year-old son, after a particularly hard day when he had been struggling with some concerns. One of Karen’s fellow parents, upon hearing her son’s day, remarked that “It’s so great to suck at something,” which greatly relieved her son. The incident impacted Karen greatly, and she then began her journey along the road of sucking at things she attempted.

Karen notes that, those people who are viewed as living perfect lives, particularly as presented on social media, do not have the perfect, effortless lives that they present. She notes that others feel lessened when they compare themselves with “successful” people, which results in anxiety and stress due to not knowing what the lives of “successful” people are actually about. Karen remarks that people only post the best things of their lives on social media, and that, if people share their struggles, they would be more honest and would show that, despite their imperfections, they are still “worthy of love,” even though they suck at something.

Doing something with the intention to suck isn’t what Karen speaks of, but rather the freedom that comes with letting go of “that pathological striving” for perfection at everything one does. She does note that people need to do well with such things as social relationships with one’s family and partner, but that other activities, such as surfing or photography, are ones which one doesn’t necessarily have to be perfect at. People do fear being humiliated if they don’t perform well in front of others, but Karen notes that people aren’t paying much attention to one in the first place, as they do have their own things to do. Where humiliation is concerned, she remarks that learning to turn this into humility is possible by accepting that one isn’t perfect at everything.

Where children are concerned, Karen remarks on studies which she had read that show that kids know what they are and aren’t good at, and that the expectation placed by parents that they are good at something they are not is a great disservice to the child, as this increases the pressure they already feel from interacting and comparing themselves with their peers - particularly if the message is that a child isn’t lovable if he or she isn’t perfect. Allowing the children to feel that it is okay to not be perfect at everything, and even to be bad at something, in Karen’s opinion, allows the children the space to excel in what they are good at and learn the necessary grit and lessons necessary to work at what they aren’t good at. Karen remarks that “kids are all brilliant,” that they all have something to offer, and that parents then shunt them into particular lanes, along the way lying to them about what they are good at.

Where millenials are concerned, Karen has noticed that they don’t understand that it is necessary to put time in to achieve success. Millenials feel they deserve such things as being promoted within a year’s time and running a business within three because they are highly competitive, and this is at odds with the reality that it takes time to become really good at something - and Karen points out becoming a doctor as an example. “They have been served a batch of lies,” Karen remarks, “that grit and hard work is not the only way to succeed, when it is the only way,” noting that successful people worked hard to get to where they are.

Accepting one’s imperfections is a way of releasing the pressure one feels, and Karen points out that this is a good attitude for people to enter a new situation or do something new, as they give themselves permission to do just that. According to Karen, accepting that one makes mistakes also allows for the freedom from indulgent self-castigation - which occurs when people believe they are perfect at everything - so that one can focus on what needs to be done.

Nostalgia fascinates Karen, and she points out that nostalgia involves a lot of “lying and rose-colored glasses.” Nostalgia, she points out, used to have negative connotations, whereas today it is viewed as a way of giving one hope. Nostalgia is a way for people to push themselves away from the present and not look at where they presently are, Karen believes, which is a disservice, as the present is the only thing there is, where the way we live is concerned, and recounts a story where Swiss soldiers were banned from singing a milking song because doing so kept them from being effective soldiers.

Aspirational psychosis is tied to the messages that are sent out to society, such as those sent out by advertising; and these messages are even more pervasive with social media. These aspirational messages, Karen believes, distract one from figuring out where one presently is and who one presently is. “Why would you want to be anyone else?” she asks, adding that this question is for people for whom the basic needs are being met. Aspirational psychosis preys on people’s insecurities and belief that everyone else’s life is better than theirs, Karen remarks, which isn’t true. “Look inward,” she advises, “and live to your own compass.” She advises that people look to themselves for what they need and want, rather than looking to others for such, as doing so also sends the message that one is never enough. Karen also remarks that “the good stuff” in one’s life happens when one stops trying to be someone or something else and love where one presently is. 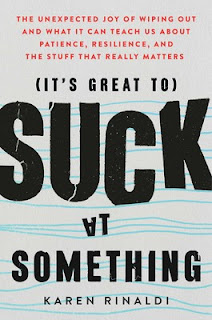 To those who realized that they suck at something, Karen would ask: “What did it teach you?” because sucking at something teaches one something. She notes that people learn more from difficult things than they do at things they are good at, as their limitations and desires come up when these happen - limitations and desires which one confronts so one can move on. As one of her sons once said: “Sometimes, the worst moments are the best moments for learning,” and Karen believes that the potential to learn from such moments is “enormous.”

Karen encourages people to go out and play, as “all of this is all about playing,” pointing to a quote by Frederich Schiller: “Man is only human when he plays!” Playing is just as important as work, Karen believes, and people shouldn’t worry about whether or not they will suck at what they play in, as doing so is very satisfying.

Purchase from Amazon: It's Great to Suck at Something: The Unexpected Joy of Wiping Out and What It Can Teach Us About Patience, Resilience, and the Stuff that Really Matters by Karen Rinaldi

Posted by alvinwriters at 3:34 PM

Email ThisBlogThis!Share to TwitterShare to FacebookShare to Pinterest
Labels: alvinwriter.com, author interview, AuthorStory, being an author, books, inspiring story, It's Great to Suck at Something, Karen Rinaldi, What Matters, writing inspiration