Gordon Dillow on Cosmic Collisions, Killer Asteroids, and the Race to Defend Earth | Fire in the Sky

In this interview, Gordon Dillow talks to Alexander “The Engineer” Lim, host of AuthorStory by alvinwriter.com, about his/her book, FIRE IN THE SKY: Cosmic Collisions, Killer Asteroids, and the Race to Defend Earth. 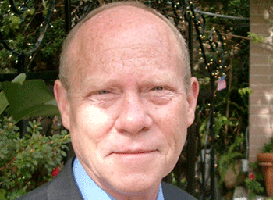 Gordon admits that the opportunity to learn about new things is what he likes about being a newspaper reporter, and he remarks that looking into something new gives someone new facts that one would otherwise not have known. He remarks that he hadn’t done much reporting on science prior to researching for the book, and his interest was piqued by an incident he experienced at 4am in June, 2016, while he was in his home in Phoenix, Arizona. He was then having a cup of coffee when the dark sky glowed red, bright enough to bathe the entire ground in its glow. He then noticed an explosion of bright light northeast of him, and when he learned, later that day, that what he saw was an asteroid, roughly five feet wide, which had entered the Earth’s atmosphere at 40,000 mph and disintegrated. He thus looked into the matter, and so was born Fire in the Sky.

A book, Gordon notes, is essentially a long article made as dramatic and as interesting as possible while giving out necessary information. It took him a year to do the research and the initial writing, and then another six months editing it. Gordon remarks that writing a book means staying on the same subject for that long and getting immersed in it, to the point of others not quite getting interested in what he talks about.

It has only been in the past two centuries that people have learned that asteroids existed, as the telescopes prior to that weren’t powerful enough to pick these up. Gordon adds that, originally, people thought that asteroids were located between the orbits of Mars and Jupiter, but occasionally some asteroids veer off from these orbits to fly near the earth; these are called “near Earth objects,” or “near Earth asteroids.” The increased sophistication of telescopes in the past two decades has led to the discovery of some 20,000 asteroids which come close to Earth, at distances of a few ten thousand miles to a million miles. Some of these objects do enter the Earth’s atmosphere, and the smaller ones burn up in the atmosphere; this happens around once a month, and some of these, such as the 2013 Chelyabinsk event, cause noticeable amounts of physical damage when these exploded. The larger ones, those around 30 - 40 yards wide, actually make it to the Earth’s surface, which they then impact, and Gordon also adds that there are likely “tens of thousands” of other asteroids which haven’t been discovered yet, which could potentially impact the Earth, noting that, if there were a light on each and every such asteroid, the night sky would light up “like the Fourth of July.” He likens the near Earth asteroids to a Nascar racecar which leaves the track and every other car in the race and starts “doing donuts” in the infield, with the Earth being in the infield, in this analogy.

Where size is concerned, asteroids can be as large as the largest, Ceres, which is 600 miles wide, or as small as a yard wide, and the smaller asteroids outnumber the larger ones by a great deal. Most of the ones that we humans need to be concerned about are those 50 - 100 yards wide, as these are the ones which are large enough to hit the earth. Asteroids also have varying densities, which means that the asteroids which are composed mostly of metals, which are in the minority where asteroid numbers are concerned, are more likely to survive burning in the Earth’s atmosphere to hit the Earth, thanks to their density, while those made of rock are less likely to do so. Gordon also remarks that, in 2029, a thousand-foot-wide asteroid named Apophis will pass within 19,000 miles of the Earth (by comparison, the orbit of a geosynchronous satellite is around 22,000 miles, and the Moon orbits the Earth at around 240,000 miles).

Where heavenly bodies and events are concerned:


(Gordon adds a caveat, in that the definitions noted above aren’t hard and fast ones, as scientists and astronomers “just can’t seem to get together” on exact definitions. That said, these definitions are the ones generally used.)

Where the dinosaur extinction theory is concerned, Gordon notes that an asteroid around six miles wide delivered the killing blow and created a crater around a hundred miles in diameter. This damage was caused, despite the relative size of the asteroid to the Earth being akin to “a pea-gravel at a giant boulder, due to the enormous speed with which the asteroid hit the Earth. (As an aside, Gordon remarks that this was, eventually, good for us humans, as mammals then took over from the dinosaurs in the ecosystem.) Gordon notes that one might not think of the air as being able to exert a great deal of pressure, but he then notes the amount of pressure one would feel if one stuck one’s arm out of a car at 60 miles per hour, then if one did that when the car was travelling at 400 miles per hour. “It’s almost like running into concrete,” Gordon remarks where asteroids hitting the Earth’s atmosphere at the speeds they do is concerned.

Gordon notes that asteroids enter the Earth at regular intervals, and that most of these aren’t noticed by humans, pointing to an asteroid event over the Barents Sea in 2016, one which released energy equivalent to ten Hiroshima atomic bombs and which was noticed only a few months later, when scientific data was reviewed. 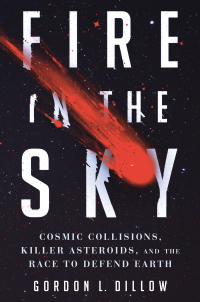 Gordon’s intent with Fire in the Sky is not to panic people, but to give information on a topic which fascinates him. He remarks that there are possible ways to deflect or slow down asteroids which appear to possibly hit the Earth. Gordon mentions that a Planetary Defense Conference which is held regularly and which is attended by scientists from around the world to deal with this concern. One of the ideas put forward is to blow up a nuclear device to nudge the asteroid into missing the Earth, but this is presently a concern, given international treaties for not sending nuclear warheads into space. Another idea is kinetic impacter, or “cannonball method,” where an unmanned spacecraft with a payload of around a half ton of metal and ram it into the asteroid to slow it down. Such a slow-down would be small, perhaps a fraction of an inch per hour, but by the time it would have it the Earth, it would have slowed down enough that it would miss the Earth. NASA will actually launch a test mission - a “double asteroid impact test” - in 2021 to see how feasible such a method is, with the spacecraft taking years from launch to hit its target.

Gordon notes that people should be “leery” of a lot of the stories about asteroid impacts, as these tend to be sensationalized, and that serious people are looking at the issue. As this issue is a long term one, any solutions we can apply are likely to benefit our grandchildren and great-grandchildren.

Purchase from Amazon: FIRE IN THE SKY: Cosmic Collisions, Killer Asteroids, and the Race to Defend Earth by Gordon Dillow

Posted by alvinwriters at 11:39 PM