Howell W Woltz and The Lawyers Guild | US Pres. Donald Trump in a Timely Political Novel

In this interview, Howell Woltz talks to Alexander “The Engineer” Lim, host of AuthorStory by alvinwriter.com, about his novel, The Lawyers Guild.

“You can’t obstruct justice when there isn’t a crime of reality to be investigated.” ~Howell Woltz

Howell figured that writing a true story about real experiences and the cases he has worked on would “cause a lot of yawns,” so he decided to package these all into a novel to create an entertaining and informative story. Doing so created its own challenges, as Howell wanted the facts within the novel to stand up to scrutiny while still keeping being able to keep a reader’s attention.

The only character who isn’t based on a real person, according to Howell, is Professor Quinlan, who is a character that Howell admits he could be, while everyone else is a person who lives in real life, albeit with some names altered. He also remarks that the stories about said people are real, as are the essential facts which are noted in the novel. One such figure is that of 7.3 million Americans either in prison or on parole or probation and some 71 million (as of 2010) who have been convicted of a crime. This, combined with a University of Columbia study which showed that 73% of those convicted of capital crimes are actually innocent. Howell noted that most of those who have been labeled as convicted felons, whom he met, are either “blacks or brown,” and he opines that this was done essentially to disenfranchise unwanted groups, as convicted felons cannot vote. 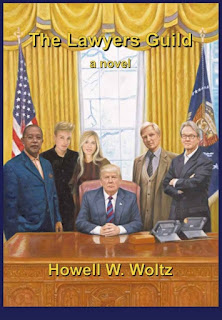 Howell remarks that, based on his research, the Progressives began making inroads into the American government in 1913, with President Woodrow Wilson, who was a self-admitted Progressive. It was during President Wilson’s tenure that the Federal Reserve, which is a private bank, was created so his backers could essentially gain control of the economy, as it is this institution which prints America’s currency, as well as when the 17th Amendment was passed, when the representation of states in Congress was eliminated, allowing power to flow into a centralized government. He notes that it took the Progressives may not be large, but they are a powerful cabal, and it took them fifty years before they sold their own narrative to the American public.

Where the depiction of the President in the novel is concerned, Howell admits to his being “imperfect,” comparing him to John F. Kennedy, someone whom Howell calls a “true Conservative” and who had the interests of the nation at heart. Both Presidents remind Howell of King David in the Bible, a man who had hundreds of wives and concubines and who sent a soldier out to get killed in battle so he could have that soldier’s wife, but whose psalms are still begin sung and who was “revered for the good things he did.” Howell admits that he hasn’t met such other people mentioned in the novel, such as Julian Assange and George Soros, but he has done his research on those individuals’ backgrounds and histories, which he has thus included in the novel.

At the end of the novel, the United States returns to the Constitution, and all such past decrees which are not aligned with it are negated. While the federal organizations created by such decrees will be dissolved, Howell believes that there will be no change where the safety and security of the average American is concerned. Howell notes that everything that affects the people’s lives is a matter of the state, which is where true power should lie in the first place, and believes that the dissolution of such agencies will benefit America, as these organizations are involved with the Progressive agenda to break the law and the rights of the average person. 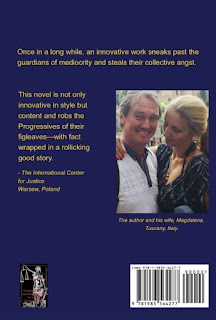 Where the Mueller report (a summary of which was released by Attorney General Barr a few days before this interview was conducted) is concerned, Howell notes that the man himself, Mueller, allowed FBI informant and criminal “Whitey” Bulger to murder sixteen people while he was an informant, and remarks that Bulger likely stayed free for thirteen years thanks to Mueller’s influence. Howell notes that Mueller’s initial investigation was into collusion with Russia, but then morphed into a case of obstruction of justice for firing the head of the FBI, even though the head of the Department of Justice had recommended it and Democratic Congressmen had asked the President to do just that, when Mueller apparently didn’t find evidence of such collusion.

Where the press is concerned, Howell noted that 82% of the world’s media is controlled by a few Progressives, and that the news brought out by these media outlets apparently follows the methodology of a program created by the CIA, called the Mockingbird, where the same terms and talking points are used by different groups. He thus remarks that people shouldn’t just accept the news at face value but should, themselves, dig deeper to get at the truth.

Purchase from Amazon: The Lawyers Guild by Howell W. Woltz