Resmaa Menakem on Racialized Trauma as the Subject of His Book, My Grandmother's Hands

Resmaa Menakem talks to Alexander “The Engineer” Lim, host of AuthorStory by alvinwriter.com about his book, My Grandmother's Hands: Racialized Trauma and the Pathway to Mending Our Hearts and Bodies

Resmaa was born and raised in Milwaukee, Wisconsin, and as he lived in a diverse neighborhood he didn’t encounter racism and violence until the 7th grade, when he got bused to a school that was then integrating kids from various races. He got through college and became involved with social justice matters with his friend, now-Congressman Keith Ellison, and after getting his Master’s in Social Work got involved with victims of addiction and violence. He then went over to Afghanistan, helping with contractors who were in war zones and who were thus getting traumatized by the conditions they were working under. Resmaa wasn’t aware, until he returned to the United States, that he was likewise getting traumatized, until he spent around a year after getting back from Afghanistan doing all the things that traumatized people did, such as pushing others away and getting depressed himself, as well as wanting to get back.

Resmaa got the title of his book from a conversation he had with his grandmother, while he was a child, where he learned why his grandmother’s hands and feet were as big as they were - and these were big from picking cotton since the age of four. It was then that Resmaa first got a glimpse of how hard life was for one of his predecessors, and it was years later, after he learned of the shooting of Tamir Rice, that he put all of what he learned about the effects of trauma on the body into My Grandmother’s Hands.

Resmaa points out that trauma is a protective measure, designed to protect someone from perceived or real overwhelm, and he remarked that trauma affects the body’s limbic, or animal, system, which means that trauma couldn’t just be talked away, in the regular psychological, cognitive-based treatment. The limbic aspect of the trauma is so intense it goes beyond cognitive treatment and ability, and those suffering from such deep trauma usually can’t articulate it, as they only have a sense of what that trauma is.

Resmaa also notes that research is presently coming out on how trauma inflicted on past generations affects the descendants of those upon whom the trauma affects by learning, when a child learns how an adult moves and reacts to the trauma that had happened to that adult, and Resmaa adds that some generations of Jews who are descended from Holocaust survivors experienced the same kind of conditions as those who had experienced the Holocaust. He also noted that such trauma can also be triggered through storytelling, like a child reacting to an intense story told to him by one of his elders. 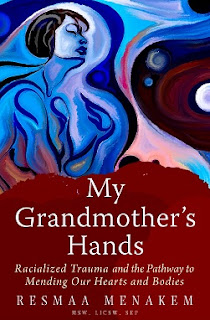 Resmaa also noted a new idea called epigentics, which is based on the idea that the environment affects the gene expression of what gets turned on and off which aids in survival, and that such expressions are carried on in future generations. He brought up the example of the “cherry blossom experiment,” when it was noted that the offspring of mice who were exposed to trauma, mice who associated and reacted to the trauma of a painful electrical shock with the scent of cherry blossoms, would react the same way that their parents did, even if they hadn’t experienced the electric shock themselves, as a protective measure, even though the offspring never came into contact with their traumatized parent. Resmaa notes that this idea is presently coming under increasing investigation by scientists today, and this opens up the possibility that trauma is protective in nature, and not a defect in the person himself.

To those who are experiencing generational trauma, Resmaa says that what they are experiencing is protective, not defective in nature, and that, when that person is ready, he should find someone to help him get through it. Resmaa also points out that telling someone that there is nothing wrong with him helps out greatly, and that getting to the incident, be it generational, or personal, where the trauma originated helps create healing.

Purchase from Amazon: My Grandmother's Hands: Racialized Trauma and the Pathway to Mending Our Hearts and Bodies by Resmaa Menakem

Posted by alvinwriters at 6:26 PM