Nancy van Dyken talks to Alexander “The Engineer” Lim, host of AuthorStory by alvinwriter.com about her book, Everyday Narcissism: Yours, Mine and Ours.

“It’s important that we be honest and direct, but we do so with kindness and graciousness.” ~Nancy van Dyken 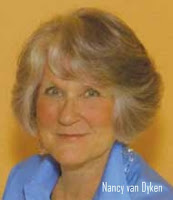 Nancy is a licensed psychologist and licensed independent clinical social worker who has been practicing for nearly 35 years now. She specializes in working in relationship issues, specifically abusive dynamics. She wrote Everyday Narcissism for just about everybody, as the concerns within affect everyone. She began talking about narcissism in relationship with co-dependency, and as time went on, she discovered the patterns of everyday narcissism as she investigated the matter; and as she didn’t want to keep teaching the same thing over and over again to her clients, she decided to write the book.

Narcissism, according to Nancy, is a spectrum. The “personality disorder” type of narcissism is on one end and describes people who are self-centered, need to be right, and don’t accept disagreement. “Everyday narcissism” is on the other end of the spectrum, with people being pleasers, doing things to be liked and are fearful of rejection.

The five core beliefs that Nancy notes we have been taught from a very young age - beliefs that drive emotions, thoughts and behavior throughout one’s life are:
Nancy notes that these five beliefs are reinforced daily, and these are so intrusive that we aren’t even aware of their influence these lies have in our lives. These lies are what Nancy refers to as “hazy trauma,” being akin to continuous paper cuts that are inflicted upon a person over time, rather than the kind of major trauma inflicted by such things as sexual abuse. Nancy gave two examples of a subject named “Nancy” who is influenced, while still a child, by some of these myths, which resulted in role reversal, where the child “Nancy” becomes the parent in the social role. She points out the phrase, “I’m so disappointed in you,” when told to a child, being an example of shaming, which plays to everyday narcissism.

Nancy notes that all parents are doing the best they can, and that they are merely passing on the methods they learned and experienced. She notes that narcissism is created from being injured, and how one relates to narcissism - be it following these five beliefs or recognizing this and healing from them - will determine whether or not its effect on one’s life is negative or positive. Nancy also gave some examples about how situations were dealt with in a manner different from how these would be dealt in a way that encourages everyday narcissism - one about a math teacher who had read her book, and another about an example in her own life when she spoke with her own daughter. 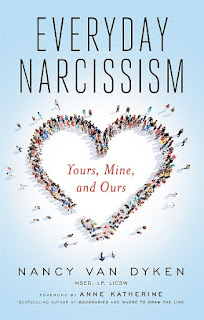 Nancy points out that teaching children these five myths, or lies, teaches these children not to respect themselves. As a concrete example, she notes that these five myths drive home to women and girls that their body doesn’t belong to them, which is why they don’t speak up about being sexually harassed. Nancy also gave the example of abusive relationships where the second myth is used to justify the abuse, and she notes that, when these myths and lies are given up, freedom and joy are acquired. She notes that accepting these myths will most likely be best addressed by reading her book, but she believes that narcissism is a state of wounding, rather than it making people awful.

Nancy notes that people have learned not to trust themselves by buying into the five myths, and that we must trust our own inner wisdom to tell us what does and doesn’t work for us. She also wants people to know that they are likeable and loveable as they are, and don’t need to please everyone.

Purchase from Amazon: Everyday Narcissism: Yours, Mine and Ours by Nancy van Dyken

Posted by alvinwriters at 3:26 PM