Monique Darling talks to Alexander “The Engineer” Lim, host of AuthorStory by alvinwriter.com about her book, Beyond Cuddle Party: How Pajamas, Human Connection and 11 Rules Can Change Your Life.


PLAY THE VIDEO AND GET THE GOOD STUFF FROM MONIQUE.

“When they hear your ‘no,’ then they actually start trusting your ‘yes.’” ~Monique Darling 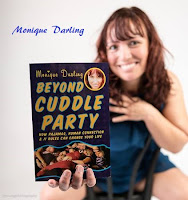 Monique grew up in a Mormon family and culture and didn’t fit in any of the “boxes” that those around her fit into. She eventually went over to Los Angeles to help out on conventions for TV shows, and as the designated sober person she was asked to create a safe space for people to cuddle in during these conventions. She then came up with her own version of a cuddle party, as she didn’t know what a cuddle party was at the time, after which she got involved in the world of cuddle parties. She then got involved in her first cuddle party a short time later, where the facilitator asked if she could hug Monique; and it was only some time later when Monique realized that she had been asked to be touched, or hugged, in her life.

It was really only after attending two hundred such cuddle parties that Monique truly began unpacking the experience and what it meant to her. Before attending cuddle parties, Monique was outwardly successful, with all the trappings of apparent success, such as the children and the dogs, but she felt there was no room for herself, for even though she worked to perfect her model of being a “good girl” she felt more and more “like a fraud.” After eleven years of involvement in cuddle parties, Monique notes that she now has the option to figure out what she truly wants and who she truly is.

Monique has become a cuddle party facilitator, and she notes that cuddle parties create the space for people to re-contextualize rejection, noting that a lot of people don’t want to say “no” because they don’t want to disappoint others. Cuddle parties are essentially a boundaries and touching workshop, with the emphasis on it being a non-sexual environment, and introduces people to being touched outside a sexual context or environment. Removing sex from the context creates a space that enables people to figure out what kind of touch they like and to figure out what it is that they really want where touch is concerned.

Monique gave an example of a woman who had been in an abusive marriage and who had been abused sexually who attended a cuddle party. She was aloof at first, but as the party progressed she began to open up more, and by the end of the cuddle party she lay in the center of the room and had everyone present touch her with their pinkies, which made her sob, as she realized that touch didn’t have to be abusive in nature.

Beyond Cuddle Party is for anyone who wants to expand themselves in asking for things they want and saying “no” to the things they don’t want. Monique wrote the book out over a two-year period after being asked, several times, by people how to do a cuddle party, and in response to their requests Monique realized she could write a book out. For her, the experience was one where it seemed that what she wrote wasn’t coming from herself, but that she was, rather, a conduit for what was being written.

Beyond Cuddle Party goes into great depth of the eleven (11) rules of a cuddle party which, according to Monique, are:

The rules in a cuddle party can also apply outside a cuddle party, and Monique gave the example of her presently asking other people for permission to touch them at times. She also doesn’t feel offended when others say “no,” as she understands that this is due to others’ taking care of themselves. Monique also remarked that these rules enable people to reclaim their bodies as their own. She also notes that, based on her experience, cuddle parties produce the same “magic,” regardless of culture. 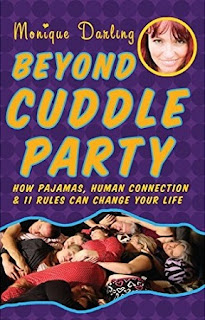 Monique points out that one is in a relationship with oneself, first and foremost, and that the more one finds ways to get to know and honor oneself, the greater the life one can lead. She notes that people being “selfless” is an erroneous concept, as doing so will drain oneself. Monique notes that, by knowing what one wants in each moment, one can relate with the world at large better than if one were “selfless.” She notes that, the more one focuses on oneself, one loves and takes care of oneself, and this enables others to be who they are in the world as well as to have permission to be that.

Purchase from Amazon: Beyond Cuddle Party: How Pajamas, Human Connection and 11 Rules Can Change Your Life by Monique Darling

Posted by alvinwriters at 1:47 AM