Becky Thompson on Teaching with Tenderness Toward an Embodied Practice

Becky Thompson talks to Alexander “The Engineer” Lim, host of AuthorStory by alvinwriter.com about her book, Teaching with Tenderness: Towards an Embodied Practice.

“We need to be able to breathe with each other.” ~Becky Thompson 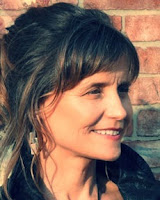 Becky is a poet, activist, yoga teacher, mother and grandmother as well as a professor in sociological theory in various universities for several years. As a teacher, Becky is familiar with what is presently going on in classrooms today, and she brought her academic discipline to bear on the topic of tenderness, which she defines as a capacity of humans learning and being with each other - a capacity which she remarks is being undermined by social inequality, such as racism. Becky remarked that she was in Greece when the first refugees from Syria and Afghanistan arrived, and she remarked that some of the first refugees she met were students no different from those she had dealt with in the United States, save in their experience of fleeing. Becky has returned six times to work with the refugees and the experience has enabled her to gain a deeper understanding into what tenderness is all about.

Becky notes that tenderness requires one to have an open mind which can embrace complexity, community and paradox, where rituals of inclusion are done along with habits that encourage deep listening and where memory is an antidote to alienation. Tenderness, in her opinion, is something that encourages people to realize that there is something more than oneself and where people are engaged on a deeper level. She also remarks that people need to be able to tap into the feeling at times of stressful disagreement, and notes that, at present, any kind of disagreement produces a sentiment where violence is likely to happen.

Becky wrote Teaching with Tenderness for students and teachers, and while she starts by talking about tenderness in the classroom, she goes beyond that by speaking about what it means to practice tenderness throughout one’s life. She mentioned a story of her fellow teacher who wondered about the kind of support available for teachers who could get worn out--support which is widely given at present, and where the stress teachers face is concerned, Becky gave the example of her own mother, who was a teacher, and she didn’t have time to go to lunch or have a bathroom break between classes several times. She also noted that teachers also sometimes pay for classroom improvements from their own pocket and that the teachers in college are under a great deal of stress to ensure that their students are able to apply their skills immediately after graduation.

Becky remarked that people “left their bodies” during highly stressful events in their lives and that rituals are needed to enable people to reconnect and re-enter their bodies. Becky noted that slowing-down learning is necessary as an embodied practice, where the body and spirit and intellect are all related and interconnected with each other, as being embodied is a psychological, emotional, spiritual and political practice. She gave, as an example of the kind of compartmentalization that is present in the educational system, the attacks of 9/11, when the teachers didn’t speak about the event as if it was (“business as usual,” outside the confines of the classroom), despite that several of the students were affected by the attacks. Becky also noted that there is a lot of dissociation going on, presently, amongst members of the government in the United States, which is an example of compartmentalization, and notes that this also goes on in other countries, from the stories told to her by the refugees she works with. She also noted that people she spoke to in Bali couldn’t recall a time when there had been a murder and had never seen a gun, which indicates that it is possible to live in a place where the fear of violence isn’t present. 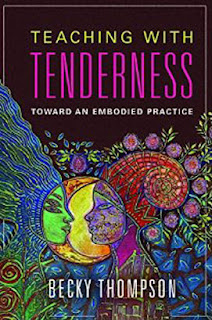 Becky’s vision for an education where tenderness is integrated is one where students feel energized and involved with the subject matter they are investigating, noting that her yoga practice helps, since yoga enables people to become present to, and within, their bodies. She gave an example of giving her students around twenty minutes to relax, and after the students woke up from that rest, the ensuing conversation was the most vibrant one she had experienced. Becky would like to see contemplative practices be integrated into education to help students engage and become productive and points out that she doesn’t compromise the rigor where her own teaching is concerned.

To others, Becky would ask about when they felt most alive, confident and available to learn and what enabled this, so that they can teach others to reproduce these in their own lives.

Purchase from Amazon: Teaching with Tenderness: Towards an Embodied Practice by Becky Thompson

Posted by alvinwriters at 4:38 AM