Jackson Fahnestock Talks about the Creation of Shu Wei's Revenge, His First Novel

Jackson Fahnestock talks to Alexander “The Engineer” Lim, host of AuthorStory by alvinwriter.com about his book, Shu Wei’s Revenge: A Young Man’s Journey into the Depths of the Underworld.

“It’s never the end until it’s the end.” ~Jackson Fahnestock 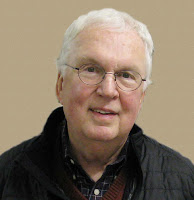 Jackson has been an architect and urban planner for 35 years, and his work took him around the world, including China and Taiwan, during which time he gained insights into east Asian culture, particularly since his work required him to work closely with the local communities. He also did a little writing, usually in technical and architectural journals, and Jackson also admitted that doing his thesis awakened his writing instincts. He retired when he was diagnosed with prostate cancer, something which affected him deeply and which also made him think about doing things that he had always wanted to do. He started off doing artwork and audio tours of San Francisco’s historic places.

Jackson remarked that he started doing research for Shu Wei’s Revenge even while he was working as an architect, gathering information that he could base the book on. He remarked that writing the book about a culture that was different from the one he was born and raised in, was a challenge, and so he did a lot of research on Chinese culture and on the history of Chinese immigrants in San Francisco. He only really started writing in earnest in 2013, after he felt he had enough to start, and Jackson remarked that, while he can’t claim to be influenced by any single fiction writer, he has read a variety of books and styles and notes that his style might have been subconsciously influenced by the writers whose works he read.

Jackson noted that the original draft for Shu Wei’s Revenge was wordy, included enough material for three or four different stories, and that it included some stretches, such as life onboard the ship to San Francisco, because he was fascinated with that particular matter but which might have bored readers. He credits his editor with honing down the novel to what finally worked and remarked that the journey of writing a work of fiction expanded his knowledge, particularly with the terminology of writing. 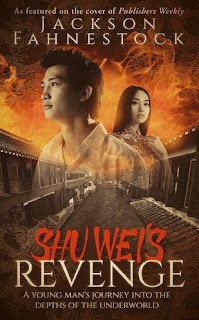 Shu Wei’s Revenge is a young adult coming-of-age story which includes such elements as a free press, and enslavement of women. Jackson remarked that the tension was enhanced by what was actually happening, both in China and in San Francisco, at the time of the story, and writing out aspects of a culture which he wasn’t born and raised in was a real challenge, pointing that one could research all one wants and what would come out would be like an entry in Wikipedia. He remarked that he was fascinated by everyday life in China and remarked that, when he was working in Hong Kong, he would go to different places and observe what went on there. You'd find many of his observations in his book, which should make it a delight to read.

Purchase from Amazon: Shu Wei’s Revenge: A Young Man’s Journey into the Depths of the Underworld by Jackson Fahnestock

Posted by alvinwriters at 3:29 AM