Curran Galway talks to Alexander “The Engineer” Lim, host of AuthorStory by alvinwriter.com about her book, Ordinary Mystic: Practicing the Presence.

“The extraordinary is everywhere in the ordinary.” ~Curran Galway

Curran was raised as a Roman Catholic and has taught for over twenty-five years. She has raised four children and gotten her Master’s degree in Divinity and is interested in the new types of spirituality that are coming out. She was inspired to write Ordinary Mystic because she felt that some of the new views on spirituality need to be brought out in story form so people can see what those spiritual principles can be seen in a daily life. Curran also remarked that Ordinary Mystic, which is the second book she wrote, is a more personal one than the first because it includes an experience that she, herself, had, and that she also included some spiritual experiences that others, whom she had spoken to, have had.

Curran’s own spirituality started when she was undergoing a dark period in her life and went on a retreat to sort things out. She mentioned that, the night before her experience, she had experienced such strange things as crosses swinging, walking up to the top of a mountain and then having a spiritual experience, feeling arms around her and being told that she is loved and that she must to tell others about how they, too, are loved. Curran emphasizes that she wasn’t looking for this experience though she starts her day with meditation, which gives her a sense of mindfulness and energy and sets the tone for the rest of the day. She also takes hikes in nature and takes time to be still, which means being being both physically and mentally still, and going inward to connect with her inner divinity.

Ordinary Mystic is the story of a woman who is at a crossroads in her life and who, when she goes on a retreat, experiences a connection with God at the top of a mountain. The experience turns her life upside-down and takes the woman years to fully incorporate it into her own life, and while it is a spiritual story, it is also a great story on its own, with Curran’s own friends telling her that the book is “a page-turner.”

Curran remarks that she wants people to awaken to the divinity that lies within themselves, and of how much the Divine loves them. She differentiates spirituality from religion, saying that religion is a home for spirituality, while the latter is all about living and being guided by Spirit. She remarks that there are so many outside distractions nowadays that people don’t turn inward to find personal transformation and finding out who one is on the inside and one’s own divinity within, which is what spirituality is all about.

Curran remarks that speaking about spirituality nowadays is “a little bit scary” and points out that the Roman Catholic Church made mystics saints, but that this was so because there weren’t that many people who were spiritually awake, which made the presence of mystics very extraordinary. She also remarked that people are hungry for spirituality because they want a more vital life, which they can get by connecting with their own spirit, and that spiritual experiences are available for everyone, regardless of background or religious beliefs or lack thereof.

Curran defines spirituality as being a direct connection to God, which is what mystics have had. Spirituality, according to her, is the heart of religion, and most religions have lost that connection over time. Curran notes that ordinary people can connect with Spirit in various ways, such as walking in nature and meditation. She remarks that just being mindful creates connections all its own and that making the connection results in a feeling of bliss and ecstasy, where everything is taken up and one is bathed in a feeling of love.

Curran notes that Christianity is moving from an indoctrinated belief system to an experiential system. She remarked that, in the past, spirituality was all about suffering, which is a central idea of Christianity, in that suffering is a part of life that had to be endured, and that what was thought of as a “simple life” corresponds to poverty. Likewise in that context, matter and spirit were separate, that one was either spiritual or materialistic and that becoming spiritual was a difficult goal to achieve because one was unworthy of it. At present, there is a great amount of turmoil where people are trying out a lot of different things, and what is coming out is the abundance of divine love and provision, which means that people don’t need to live in poverty and suffering. This, in turn, creates an attitude of abundance and trust that such abundance is available to everyone. Curran believes that, in the future, more and more people will become mystics, and in that oneness, they can move beyond the “dualistic reality” that is present into a world view of wholeness. 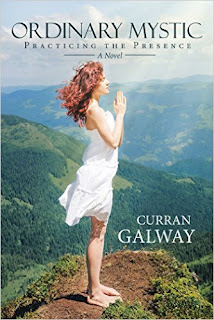 Where duality is concerned, Curran referenced some recent scientific findings where there is a part of the brain that lights up in an MRI whenever someone has a spiritual experience. She also remarks that children, before around the age of five, do not have a mid-line in the brain, which means that, for them, everything that goes on is a “natural contemplative experience.” It is when the brain divides, which starts around the age of seven, that duality becomes present in the brain. That said, meditation enables one to rise above such duality, which then accesses the mystical part of the brain.

To those who have had a spiritual experience but who are reluctant to speak of this to others, Curran recommends writing down such experiences as, when one reads these, there are messages to be found in these. She remarks for people to trust that we humans are moving into a new vision of spirituality and that some of the old ways will need to be dropped, and that we should not be afraid because God is with us every step of the way and wants to give all of us the kind of deep connection that saints and mystics have had.

Posted by alvinwriters at 6:14 PM