Jenny Johnston talks to Alexander “The Engineer” Lim, host of AuthorStory by alvinwriter.com about her book, Your Past Life Inheritance: Tapping into the Wisdom Within to Create Your Future Now.

“The things that we’re struggling with in this lifetime, they wouldn’t be there if we hadn’t already stepped through them in another lifetime.” ~Jenny Johnston 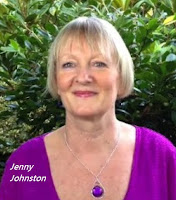 Jenny was an occupational therapist working with veterans who used relaxation therapy and she became interested in spirituality and past lives after her mother’s sudden death. It was while she had “a lot of time” while recovering from a spine injury that she told her Reiki healer that she wanted to become a past life therapist, a course on which, as it turned out, the healer’s sister had already done. Jenny then took the hypnotherapy course, where she also learned about Emotional Freedom Techniques (EFT), which is commonly called “tapping,” as it is a form of energy psychology that can be thought of as acupuncture without the needles which works to clear any blockages in one’s energy that are identified with particular memories. It was during her investigations into these that she came in contact with Kryon, which is a conglomeration of beings who speak through a channel and whose purpose is to aid humans find who they really are. Her contact introduced her to the Akash, which is essentially a library of one’s past lives, and she then combined what she learned in EFT with working with guides to work with clients on such issues as fears, self-sabotage and unfinished business in previous lives to release these and create a better life for themselves.

Jenny describes Your Past Life Inheritance as being a self-help tool that empowers its readers to be able to do the work, as it includes links to videos and other material so that people can learn and do themselves. The book includes transcriptions of sessions conducted by Jenny with clients who have given permissions to have their experiences included in the book. Jenny included these transcriptions so that readers can see, word for word, how this the session was conducted. Her technique is essentially that of what she calls “waking hypnosis,” as the brainwaves go into the subconscious range while the client is still conscious and awake, and deal with the totality of a person, including the soul and one’s Higher Self. Jenny notes that past life events sometimes come to a client - even ones who don’t believe in past lives - when she is conducting a normal EFT session, and that the realization often surprises the person concerned. During the first sessions, she asks her clients to go to their Akash and its Crystal Cave to help identify those memories in one’s past lives which are holding us back in the present, likening these to outdated background programs in a computer that are running and taking up space. Later on, she takes her client to places of higher learning for them to get why that incident was chosen by the soul and the lesson behind it, after which she takes her client back to the present with that learning, which takes away the feeling that one is a victim and enter a state of wonder and creation.

Jenny notes that, while we call previous lives “past lives,” this isn’t entirely true, as when one is in a past life, that past life is in the present and real, as the energy present in humans today enables humans to access their past lives. She takes into account information given by spirit guides such as Kryon, whose channelers are often accompanied by scientists who back up what Kryon describes with scientific evidence. Jenny notes that she creates the space for people to clear their blockages at a soul level, also noting that intention plays a big part in her work. She notes that the case studies in the book are a good representation of the regressions she does with other clients, and that a common thread in these regressions is the feeling that we humans are not alone, as well as that of connection to guides and Higher Self as well as of empowerment, particularly in the cases of people who, in their past lives, have suffered trauma for standing in their truths. 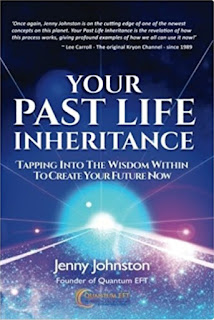 Jenny remarked that she’s training Quantum EFT practitioners to eventually do the work, as she admits that she won’t be around forever and she wants this to be available to the world at large. She notes that fear is behind people’s feelings of being judged, persecuted and humiliated, and that this affects people physically, and then gave the example of a client whose son, at the present, was blind because the client was guillotined in a previous life and the son in this lifetime was the son in that previous lifetime, who saw his father being killed. She notes that the effects of such traumas are there to protect us, and that releasing these includes acknowledging it for the protection offered and recognizing that it no longer serves us.

Purchase from Amazon: Your Past Life Inheritance: Tapping into the Wisdom Within to Create Your Future Now by Jenny Johnston

Posted by alvinwriters at 6:06 AM