Anna Gatmon on Living a Spiritual Life in a Material World

Anna Gatmon talks to Alexander “The Engineer” Lim, host of AuthorStory by alvinwriter.com about her book, Living a Spiritual Life in a Material World: 4 Keys to Fulfillment and Balance.

“Living our calling and purpose is how we humans can live in spiritual and material balance.” ~Anna Gatmon 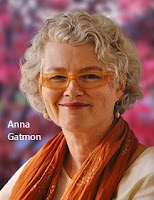 Anna lived in Paris in her twenties, where she worked as an international fashion model, and while she was fulfilled materially, she felt something missing. This feeling stayed with her when she went to the United States, where she got a doctoral degree, married, and raised a family, and she realized that she had to find a middle ground between spiritual fulfillment and material gratification.

Living a Spiritual Life in a Material World is intended for people who are looking for more purpose and meaning, be they spiritual people who feel an emptiness due to a lack of appreciation for the material or people who are gratified materially but who are spiritually empty. Anna intends for this book to be a road map that anyone can follow, whatever their culture or spiritual upbringing, or whatever their lifestyle, be one an office person or a guru, and remarked that her book provides an unusual approach to spirituality and materialism.

Anna points out that people create “amazing things,” and that there is a common misconception that spiritual people don’t lead lives of material abundance and gratification. She notes that people, as part of being spiritual, need to appreciate the material creation of others and gave the example of appreciating a chef’s work as an example of balance between a spiritual aspiration of the chef and the material gratification on the part of the diner. She notes that humans’ preference for either the material or the spiritual is due to seeing the world in duality of either/or, and that both the material and the spiritual both need to be expressed in order to create balance. Anna opines that being very spiritual in the context of balance with materialism doesn’t necessarily mean being rich, and gave an experience of hers as an example where, one morning, when she was concerned with her family’s financial situation, she became present to the abundance of what she had, with the six dollars in her account being merely one of the things she was blessed with.

The four keys that Anna notes in her book are: 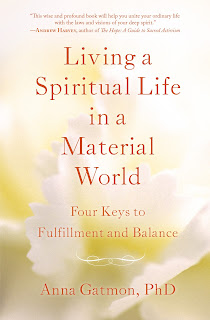 The genesis of the book came about when Anna was in a meeting with the Dalai Lama and another woman asked the same thing Anna was asking herself: how does one integrate the spiritual teachings that one has learned into one’s daily life? She remarked that the four keys came to her in a flash while she was identifying spiritual experiences in her life, and that the research into these keys took three years, remarking that this is similar to the way scientists make their breakthroughs.

Anna advises people to live their highest calling, as doing so enables one to be in balance and unity with one’s spiritual aspirations and material expression.

Anna’s website is annagatmon.com, where one can download her workbook, 7 Practices for More Prosperity, Peace and Purpose for free.

Purchase from Amazon: Living a Spiritual Life in a Material World: 4 Keys to Fulfillment and Balance by Anna Gatmon

Posted by alvinwriters at 6:10 AM