Peg O'Connor, Ph.D talks to Alexander “The Engineer” Lim, host of AuthorStory by alvinwriter.com about her latest book, Life on the Rocks: Finding Meaning in Addiction and Recovery.

“You have the potential to make some wonderful meaning, even out of really terrible or debilitating circumstances.” ~Peg O'Connor, Ph.D 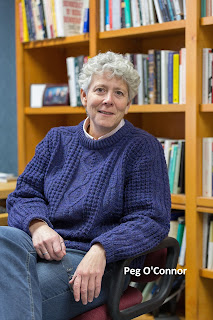 Peg became interested in philosophy during her undergraduate years and got her bachelor’s degree in it, and after taking a break for three years, went ahead and earned her postgraduate degree in philosophy. She has been teaching philosophy for well over two decades and has a philosophy blog called Philosophy Stirred, Not Shaken on psychologytoday.com. She is also a recovering alcoholic.

Peg remarks that philosophy is essentially self-help, and that the original philosophers, like Aristotle, Socrates and Plato, understood about the care of one’s soul or character and of happiness flourishing, and her interest in using philosophy to help her recover from alcoholism was triggered when a friend of hers, who was, like her, a recovering alcoholic, wondered if the self that she was before she was an alcoholic was the same self that she was at present, and this piqued Peg’s curiosity, because, for her, philosophy does deal with the issue of continuity of identity. Peg then began integrating philosophy into her recovery, and as a result, she became more engrossed in philosophy as a real-world tool to help solve real-world problems - in the streets - as she said, rather than the purely academic pursuit that it is made out to be nowadays.

Peg thought of writing the book because she wanted to gather all of the insights she had collected into a single work. The book has several essays which can be read on their own, but which, if read altogether, creates a tapestry of suffering to transformation. Life on the Rocks might deal with addiction, but anyone can get something from it, she says. Writing the book gave her a deeper appreciation for philosophy and mentioned that it has made her more compassionate as a teacher and more involved with getting philosophy back into the regular daily lives of people.

Peg noted that shame is both a cause and a consequence of addiction, and this acts as a lens that distorts one’s view of oneself, and it doesn’t help that an addict tends to push away those people around them who can tell them who they really are. She mentioned Ludwig Wittgenstein, who remarked that “Even if all scientific questions could be answered, the problems of life remain completely untouched,” and gave the example that science can say that, when one is addicted, the neurotransmitters go into overdrive, but it doesn’t explain what happens in the experiential level and doesn’t answer the questions why people get addicted in the first place. 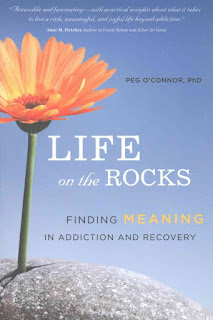 She also objects to addicts being reduced in essence to a biological body part, the brain i this case, rather than their being identified as people and independent beings. Peg remarks that all people have what philosopher William James calls a “misery threshold,” a sort of boundary where people will stop, and when an addict reaches this point, they change in order to bring balance back into their lives and notes that, sometimes, external forces can help people recognize and deal with their addictions. She notes that there is no one philosophical stance regarding drugs and alcohol, and notes that, just because it’s legal, it may not necessarily be right.

At present, Peg is delving into shame and how it interrupts self-forgiveness and is also working on a project regarding William James.

Purchase on Amazon: Life on the Rocks: Finding Meaning in Addiction and Recovery by Peg O'Connor.

Posted by alvinwriters at 4:23 PM