Jenny Johnston talks to Alexander “The Engineer” Lim, host of AuthorStory by alvinwriter.com about her book, Tapping Into Past Lives.

“I take people up into their higher learning so that they’re looking down on their life and seeing it differently and getting the higher learning from that.” ~Jenny Johnston (on past life regression)

Jenny is an occupational therapist by profession who discovered EFT while working for her hypnotherapy diploma, and she then began using it in her work to help her clients resolve their personal issues. She was also interested in past life regression and combined this into her work after receiving messages from the spiritual channeler Kryon about “mining the Akash,” which is about remembering one’s past lives to mine the gifts found there. At present, she works with whom she calls “higher guides” to release the blocks that are keeping people from progressing in this lifetime, or to recall positive aspects of past lives that can be used in this present lifetime.

EFT, commonly called “tapping,” is part of a field called “energy psychology” and is the most well-known. It involves using the body’s acupressure points to deactivate the body’s fight or flight instincts and create a state of relaxation, as well as using cognitive methods to bring one’s brainwaves from the conscious down into the subconscious. This enables one’s body to be able to identify a trauma and then release the body’s instinctive response to it, thus creating a calmer response to that issue. Quantum EFT is an aspect of EFT that Jenny created, based on her knowledge that sprang from past experience with her clients, wherein a person steps into that memory of when that trauma began, whenever it might have started, releases the beliefs around that trauma, and learns higher lessons from that situation and bringing these into one’s present life. Unlike standard methods of hypnotherapy, the client is awake all throughout the session.

During the course of her practice, Jenny discovered that a lot of traumas in people’s present lifetimes had an origin in their past lives, and these are essentially “soul traumas,” and that people who don’t necessarily believe in past lives weren’t able to figure out why they were sabotaging themselves until they discovered the source of this, which sprang from a past life. Soul traumas aren’t necessarily limited to the emotional and the psychological, Jenny noted, but can also manifest themselves physically. Jenny gave an example of a woman who suffered from severe headaches that normal therapy couldn’t resolve, who, after undergoing sessions with her, discovered that that woman had been a businessman in a previous life who had died from head injuries suffered during a car accident. Once the woman had undergone therapy with Jenny to clear and resolve that issue, her headaches were gone.

Jenny wrote her book because she felt that the stories and experiences she had gathered throughout the course of her practice, be it in private sessions or in her workshops, were so profound and amazing that these needed to be shared. She also hopes that some readers will get their own “A-ha!” moments about such possible things in her life, and mentioned that readers don’t necessarily have to believe in past lives to get something out of it. Jenny also included links to various videos where people talked about or revealed their experiences. She remarked that having an “ideal reader,” someone whom she could envision whom she was writing her book for, helped out greatly where writing the book was concerned. For Jenny, writing the book has enabled her to step into her true purpose, stepping out of occupational therapy and becoming an EFT practitioner and trainer full-time, which is what she loves to do. 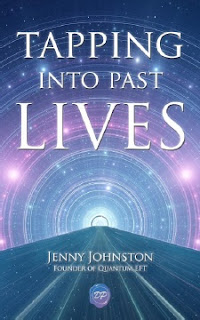 To those who are suffering from trauma, Jenny recommends that they deliberately create the intention to go to the trauma’s origin, wherever or whenever it might be, and to see it as part of a whole, as the trauma might have begun a long time ago. She also advises people to view their life as being not just the one in the present, which is but one chapter of the life of their soul, but to recognize themselves as their soul. She hopes the book will enable its readers to access the healing from wherever they are in the world, without Jenny needing to physically be with people to help them out.

Jenny Johnston’s websites for her book, Tapping Into Past Lives, are jennyjohnston.com.au, as well as quantumeft.com.au, tappingintopastlives.tv.


Purchase on Amazon: Tapping Into Past Lives by Jenny Johnston
Posted by alvinwriters at 6:02 PM