Alina Frank talks to Alexander “The Engineer” Lim, host of AuthorStory by alvinwriter.com about her book, How to Want Sex Again: Rekindling Passion Using EFT.

If you want to have passion in other areas of your life, then really consider sex as a path to having more passion in your life overall. ~Alina Frank

Alina had been looking for a way to heal herself of a serious illness when she discovered Emotional Freedom Techniques (EFT), which enabled her to get the healing results she so desired. She then became a practitioner, attaining several certifications and working with literally thousands of people all over the world, over the course of twelve years from her home, thanks to the Internet, and it was four or five years into her practice that Alina began focusing on healing people who had challenges with sex and intimacy. She thus became an expert in these areas, something she admits she would have not wanted to do while growing up Catholic.

EFT is a healing modality that is also called “tapping,” as part of this modality involves tapping what are effectively acupuncture points on one’s head and upper body, using fingertips. It is used to remove negative emotions and to remove that which is limiting people in various aspects of their lives. Practitioners and trainers are certified by such organizations as EFT Universe and AAMET.)

Alina intended the book to be read primarily by women who are experiencing challenges with sex and intimacy, although men could also get something from it. She notes that regular sex is good for one’s body, resulting in lower bad cholesterol levels and a younger biological age than one’s chronological age, and she wrote the book to reach more people than she could otherwise do with her practice, as well as to help her settle some of her own issues when it came to communicating with her children regarding talking to them frankly and properly about sex. Alina notes that she wrote the book in such a way that those who aren’t familiar with EFT can work on themselves, and that she had received lots of signals from those around her that she should write a book, which she admits that she greatly resisted.

The book isn’t just for those victims of violent sexual trauma, such as rape and incest, who shy away from intimacy, as Alina notes that most concerns with intimacy have sources outside the bedroom, particularly since women don’t isolate the bedroom from the rest of their lives, which meant that concerns in their lives in these spheres interfere with sex and intimacy. Alina gave the example of her own experience, when she got annoyed by men (not women) interrupting her for whatever reason, and she traced it back to when she was flashed at by men in her younger years, and it was through EFT that she was able to heal herself of this concern. 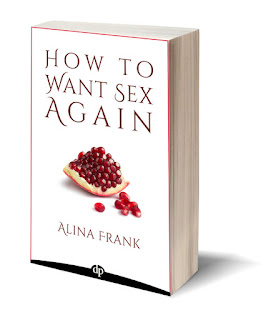 To those who are experiencing concerns with sex and intimacy, the most important point Alina wants to make is to not buy into the excuses that may be used to explain the lack of desire for such, such as “You’re going through menopause,” as even people in their eighties and nineties can enjoy passionate sex. Alina also remarks that a blockage here could also be representative of blocks in other aspects of people's lives.

Writing the book might have been fun for Alina, but she has been gratified by the response to it, particularly by readers who have told her that it touched them and has changed their lives. She wants to be able to train others for the work that she does and has launched a six-month program called “Reclaiming Intimacy” for women who might want to become trainers themselves.

Posted by alvinwriters at 1:33 AM