Brendan Jones on The Alaskan Laundry, A Novel about Life in Alaska and a Woman's Personal Journey

Brendan Jones talks to Alexander “The Engineer” Lim, host of AuthorStory by alvinwriter.com about his book, The Alaskan Laundry.

I don’t think you can write well about something unless you’re surprised by it. ~Brendan Jones


Colorado-born Brendan’s parents were both journalists. He actually grew up in Philadelphia, and at the age of nineteen he transferred to Alaska, where he worked within the fishing industry and where he continually returned to. He started the book in 2005 by creating several different characters and weeding them until only its present female protagonist, Tara Marconi, was the “last one standing.” Brendan got involved with various matters over the years to support himself such as setting up and running his own construction company, as well as writing out blogs and writing for various publications, so it was only around 2013, when he got involved in Stanford’s Stegner program, that he got serious about finishing the book, which was finally completed and published in 2016.

Brendan describes the book as a real “hero’s journey,” with Tara figuring out what home means to her, describing the theme as nostos, which he mentions is a theme of Ulysses and which he describes as a fascination with homecoming and as the root word of “nostalgia.” He remarked that his mother inspired the essence of Tara Marconi’s character, and his experiences with boxing in his youth and his working in the Alaskan fishing industry came into play in the book. Brendan remarked that the scenes where Tara was working on a crab boat were some of the easiest scenes to write, and he also noted that one of the surprises he learned was that there were actually some female fishermen working on crab boats. 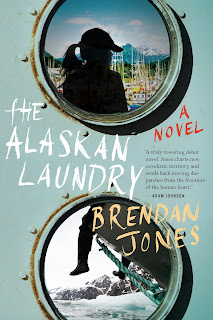 Brendan remarks that Alaska is the kind of environment where one’s character really gets brought out, and he also admitted some of his experiences also worked their way into the book. He remarked that writing the book enabled him to get clear on what home meant for him, commenting that home is where one is raised and where the traditions that mean something are present, as well as a community where everyone looks out for each other, regardless of where they originally came from. Brendan is presently working on another novel as well as writing out pieces on what life is like, living on a World War II era tugboat with his wife. He remarks that people should be more present to the world around them, for people aren’t separate from it, and to be aware of the present concerns with its present state.

Brendan Jones’s websites for his book, The Alaskan Laundry, is alaskanlaundry.com and brendanisaacjones.com.

Purchase from Amazon: The Alaskan Laundry, a novel by Brendan Jones
Posted by alvinwriters at 4:16 AM