Coach Mark Speaks talks to Alexander “The Engineer” Lim, host of AuthorStory by alvinwriter.com about his book, Repeat After Me.


“Learning is a lifelong event, and you gotta always, constantly be learning.” ~Coach Mark Speaks

Coach Mark was born in Jamaica and came to the United States while young. He might not have been an avid book reader in his childhood, but even at a young age he had an entrepreneurial mindset. By his own admission, he worked on a number of business endeavors in college, and before graduating, he and a roommate set up a nightclub, which might have had a lot of potential but became a serious financial drain for them. The nightclub stint, however, gave him experience in design, which he turned into a viable multi-million dollar business

Coach Mark admits that his success wouldn’t have happened had he not looked around and seen people who might not have had products as good as his but who were apparently doing better, and then told himself that, if they could do it, so could he. Since then, he had studied success and successful people, and credits being an avid learner for ten years as being part of his success, noting that he has well over a thousand paper, audio, and ebooks in his library. He notes that age and background aren’t barriers to achieving success, citing such examples as Grandma Moses, who achieved success in her seventies, and Whatsapp founder Jan Koum, who was an immigrant who was financially strapped when he and his family arrived in the United States. 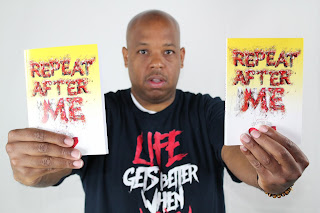 Once he got enough passive income to live on, Coach Mark then focused on helping others become successful. His goal is to enable people to believe in themselves, focusing on particular aspects of people’s lives that they want to achieve success in. Repeat After Me is the result of a years-long desire to write a book, but it wasn’t until he thought of writing about success that he actually did so. Coach Mark wrote and designed Repeat After Me to be deliberately easy to read, not intimidating, and easy for people to digest, particularly since he noted that a lot of people don’t pick up book after leaving high school or college.

Coach Mark included other reference books in the chapters on purpose, rather than place these all in the back of the book, as he noted that most people don’t read the material in those parts of the book, to make it easy for people to refer to those references. He sees positive affirmations as being very important to a person achieving his goals, as these reprogram a person’s mind to lean towards success. Coach Mark noted that people, due to the environment and the people around them, engage in negative affirmations, which are detrimental to their succeeding, as they are flooded with negative affirmations throughout their lives, usually because people impose their own negative beliefs on others. He believes that the only way to get answers, and thus results, is by asking questions, hence the importance of questioning oneself. 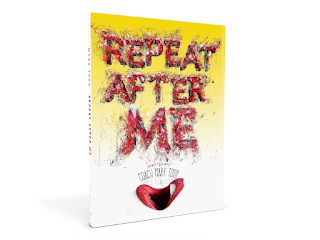 Coach Mark would love for his book to be read all over the world to help people develop themselves, as an entry-level book to success, and he wants to touch lives all over the world. He loves to learn, remarking that it is a measure of how successful his life is that he finds it difficult to name something he doesn’t like to do, and would like to travel to Africa and South America.

Coach Mark Speaks’ website for his ebook, Repeat After Me, which you can get for free at no cost, is repeataftermebook.com. 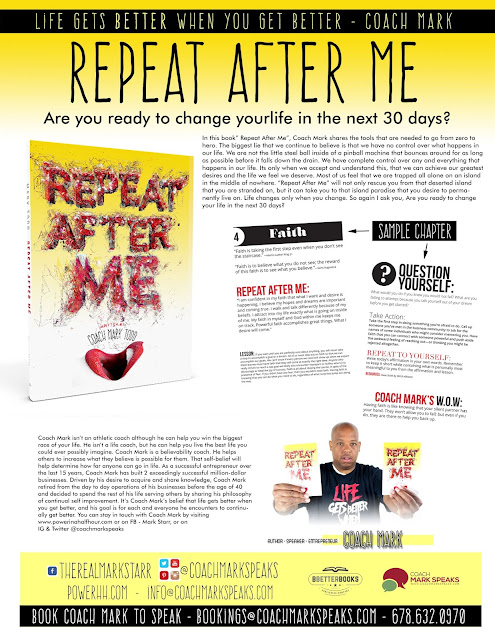 Posted by alvinwriters at 6:05 AM