Marivi Soliven talks to Alexander “The Engineer” Lim, host of AuthorStory by alvinwriter.com about her book, The Mango Bride.

"Filipinos are a lot more than pansit, lumpia, and Manny Paquiao." ~Marivi Soliven 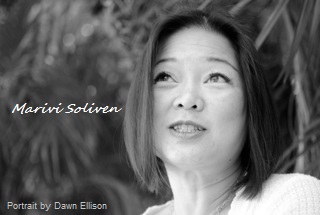 Marivi was formerly an instructor of English at the University of the Philippines, and she moved to the United States in her thirties after she got married and as such her sense of identity as a Filipino was already fully-formed. She remarked that she had to change her way of thinking when she got to the United States, since her first job as a caregiver and personal assistant to a disabled professor was disparate from her previous work as an educator and her later jobs as an interpreter and an advocate of anti-domestic violence.

Marivi was aware that becoming an immigrant is a long process, and she also mentioned that the sense of dislocation, of being removed from one’s roots, was part of her experience as an immigrant, and is most likely the same kind of experience that other immigrants go through.

Marivi wrote the book because she simply wanted to tell the story of Filipino immigrants in the United States, rather than to appeal to any particular audience, but she notes that it would most likely appeal to those who have moved to an unfamiliar country from the place they grew up in. She chose a mango for the title because that fruit is synonymous with the Philippines. She noted that she wanted to give an alternative view of immigrants, in general, other than the commonly-held image of foreigner who is seeking a better life as they can’t survive on what they would earn in their home country. She notes that some Filipinos, herself included, who emigrated didn’t know how to operate a washing machine (like maybe what's in most walk-in DIY wash services) when they first arrived in the United States, because in the Philippines, such chores are handled by the household help, or at least in middle- and upper-class families.

Some of her experiences went into the book and the places mentioned are likewise drawn from her own life. Her main character, Beverly, is “at least 95%” based on real life. For the character of Amparo, Marivi drew on her memories of her own mother and her aunt. In writing the book, she needed to do some research on police procedures and Google Maps, and asked friends in Manila to take pictures of places mentioned in the book.

Marivi admits that she had read the works of a lot of authors, such as Hemingway and Karen Christence Dinesen (aka Isak Dinesen) and some of them definitely influenced her writing style, particularly Jhumpa Lahiri when it came to how to present Tagalog conversations in her book, and as she has occasionally watched Filipino soap operas, she remarked that the overall frame of her story is based on similar contexts.

Marivi notes that food is a metaphor for love, and that she deliberately wanted to highlight the Filipinos’ love for food in the book, particularly since a longing for food is central to Filipino immigrants, and for her, smelling Filipino dishes bring back memories of her past. She also compared Thanksgiving with Christmas and pointed out how during one Thanksgiving with a Filipino family, the turkey was a centerpiece that nobody really bothered with, as they were focusing on Filipino dishes like lechon.

Marivi would advise immigrants to be patient, as it takes time to understand how they would fit into the society they are entering. For those who are native to the countries where Filipinos emigrate to, she would like to point out that Filipinos are a lot more than the stereotypical association with pansit, lumpia and Manny Pacquiao, although she does admit that this kind of global “branding” is also due to Filipinos tending to easily blend into the mainstream societies they emigrate to and leave their mark on the local culture. 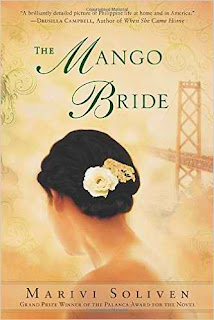 Marivi likes cooking and yoga and would like to be able to travel to different places and countries in the future, such as Angkor Wat, some parts of India, as well as Batanes and Sagada in The Philippines. Marivi remarked that she enjoys speaking to readers and invites them to contact her through her website or through her e-mail address, marivisoliven17 at gmail dotcom for a Skype book club visit. She’s pleased with her involvement with ACCESS Inc., an organization involved with giving legal aid for survivors of domestic violence, of whom Anne Bautista is a legal director who has been doing this kind of work for over ten years.

Marivi has another book featuring Filipinos who migrated to the United States in the 1930s. The website for her book, The Mango Bride, is marivisoliven.com.

Purchase on Amazon: The Mango Bride by Marivi Soliven
Posted by alvinwriters at 7:00 PM