In this interview, Hao Lam talks to Alexander “The Engineer” Lim, host of AuthorStory by alvinwriter.com, about his book, From Bad to Worse to Best in Class: A Refugee's Success Story. 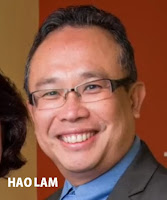 Hao admits that he wasn’t a particularly good student as a child. His father was from China and worked as a soldier for the American government while in Vietnam, while his mother was a teacher in a private school. Hao admits that he showed no interest in school, and after not attending classes at the school his mother worked in, the latter shifted him to another school. It was also through the efforts of his mother that Hao discovered his love for mathematics, as his mother found him tutors who taught him that and Chinese.

Hao’s childhood was carefree until April 30, 1975, when Saigon was taken by the North Vietnamese. His father was taken prisoner, because of his working with the United States government, he was held in a “re-education camp” for a full year without his family knowing what had happened to him. Hao’s father was released the following year, and one of the things he told then-eight-year-old Hao was that Vietnam was no place for them, and that he needed to leave, somehow.

Hao then spent the next twelve years attempting to escape Vietnam, years where he got shot at and imprisoned, while living in one of the worst neighborhoods around, and for him life had no meaning at the time. His friends likewise made attempts to flee the country, and none of them came back, as they died during their attempts. He finally managed to get away in a 50-foot fishing vessel which was packed with some 140 refugees. They had no food or water for seven days and nights, and while two of the refugees died along the way, Hao remarks that he felt entirely hopeless and was wondering if he would see the sun the following day. That said, his boat still got lucky, stating that there were other boats full of refugees which spent up to a month out at sea before making landfall, and that one boat that started out with 100 finished the journey with only 20.

Hao then spent a year in a refugee camp in Palawan, in the Philippines, where he learned English. He considered applying to be sent to the United States on the strength of his father’s previous work with the American government, but as it was he had two relatives - a grandmother and an uncle - who lived in a town in Prince Rupert, Canada. They were aware of what he did in Vietnam, while attempting to escape, and as they knew that Hao would likely get recruited by a gang in the United States, as he knew nobody there, they sponsored him so he could live with them. Hao then remarked that, once he moved to Prince Rupert, he was mistaken for a Filipino and was addressed in Tagalog by quite a few people there.

It was while in Canada that Hao worked on his dream of completing his high school education, which he did at the age of 23, in two years’ time, and then got a college degree at the age of 27. His maturity stood him in good stead while in high school, despite the culture shock and even though things weren’t pleasant for him at first, and it was during this time when he discovered his passion for teaching, as he would often go over to his high school classmates’ houses to tutor them in math - which, he remarks, didn’t particularly require him to be fluent in English, as he admits that he was “illiterate” in English when he left Vietnam.

Hao moved to Seattle after getting his college degree in 1995, and once there set up his first tutoring school. “Honestly, I didn’t know what I was doing,” he remarks about those early days, adding that he had to learn how to run his business on the fly. Hao remarks that he made no money in the first three years of his school, and also admits that he was after making a lot of money, so he set up several businesses which eventually failed. “I was chasing money the first part of my life,” he admits, which was natural given his desperate upbringing, but then he then focused on his why and what he was passionate about, and that was when he focused on his purpose in education, teaching, and learning, which his business enabled him to do. Doing so paid off for him as, at the time of this interview, his school is present in some 60 different locations in 15 American states.

Hao notes that, at present, students don’t get much support from teachers and that, while teachers help out those who are falling behind, those who can learn more - above average students - are essentially left on their own. Hao’s business, as a part of supplemental education, is designed to enable such students to learn more so they can get into the “gifted program” that only the top 1% of the American student population is part of, and which is thus highly desired by a lot of the students.

Hao notes that he doesn’t brag about his success; he brags about his failures and the lessons that he learned. His vision is as follows:


Hao remarks that, in addition to mentoring others, he has three mentors whom he speaks.

Where the book is concerned, Hao remarks that, whenever he told others his story, he was told to write his experiences out in a book. He notes that he loves sharing, and that writing the book out was rather challenging, as he would start and stop often. It was around two and a half years previously when he finally sat down with someone who would hold him responsible for writing a book and, because of that, he finally finished writing the book in over a year’s time. He admits that he and his wife “get emotional” whenever they read it and that, despite his past, he made the book more of a positive learning experience for the reader, rather than the dark kind of story it could have been. 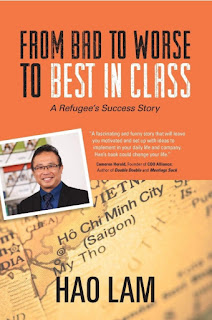 Hao now talks to a lot of immigration groups as well as in colleges about his experiences, sharing his story while giving out the lessons he learned along the way:


To those who are in a crisis in their life, Hao quotes the quote at the start of this blog, which is written on the bookmark that comes with From Bad to Worse to Best in Class.

Purchase from Amazon: From Bad to Worse to Best in Class: A Refugee's Success Story by Hao Lam