In this interview, Gerald Robinson talks to Alexander “The Engineer” Lim, host of AuthorStory by alvinwriter.com, about his book,  Education for Liberation: The Politics of Promise and Reform Inside and Beyond America’s Prisons.

“Identify a program in your community that has an open-arms approach to people like you.” ~Gerald Robinson 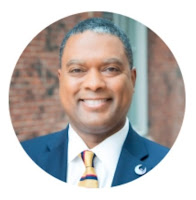 The Center for Advancing Opportunity is a research initiative based in Washington, D.C., which was created to identify various avenues to strengthen people’s educational knowledge and entrepreneurship, as well as investing money in scholars to create a solution to why so many people do not graduate high school on time or, if they do, they need remediation.

On a personal level, Gerald’s involvement with the justice system began in the mid-1980s, when he involved himself with young men who were at risk of going to jail. The genesis of the book began with the death of Freddie Gray in Baltimore, when Gerald connected with colleagues, one of whom became the co-editor of Education for Liberation, and spoke to them about criminal justice reform not being a partisan issue. The book sprang from an effort to reach out to people in all walks of life, including people who were incarcerated, correctional officers, people who work in think tanks, entrepreneurs and scholars, with the book thus springing out of the research and conversations so conducted.

Gerald notes that writing a book is a labor of love, and for him it was a matter of finding the right people to essentially write out the various chapters. The book focuses on the role of education in the criminal justice system, and that those who have taken education while incarcerated took up adult basic education, adult secondary education, vocational training and post-secondary courses. The second issue the book speaks of is the reintegration of formerly incarcerated people in society, and the third is essentially the point that education matters.

Gerald notes that 2.3 million Americans are presently incarcerated, most of whom are in state prisons, most of whom did not finish high school and 95% of whom will eventually leave prison. The attitude of individual states differ, with some states making those who are incarcerated and who do not have a high school diploma enter educational courses so they could get their high school diploma. Gerald notes that there are some 650,000 people who are released from incarceration every year, so the question is how these people will be reintegrated into society. He also notes that the United States imprisons more people, per capita, than any other nation in the Western world and cites that less transparent nations, such as China, could very well have a greater rate of imprisonment, but this isn’t officially recorded.

As an example of the kind of challenges former prisoners face when re-integrating into society, Gerald gives the example of someone who was released after 26 years. The individual has a government ID who received $200 - enough money to leave the prison and go to a transition house - and Gerald notes that the sum given can be higher or lower than that. Once at a transition house, the individual needs to find a job, and some states and counties have such transitional housing, while others do not. Transitional housing can also be offered by non-profit organizations or communities, and some organizations, such as those experienced by an author of a chapter of the book, help people not only find jobs but also offer a daily paycheck. Reconnecting with family is also another challenge, and Gerald gives the example of incarcerated women who have not seen their children for years. 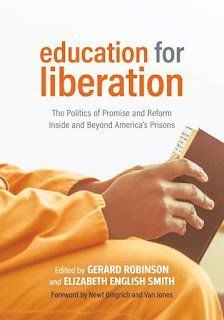 Gerald refers to ex-prisoners being branded with “the scarlet letter F,” for “felon,” and gave the example of a former prisoner who, although presently a successful entrepreneur, found it difficult to get his business started once people realized he was a felon. Gerald acknowledges the Pavlovian response of backing away from someone whom one suddenly realizes was a felon is natural and needs to be worked through, and notes that, for such serious crimes as rape, drug dependency, elderly abuse and child molestation, there are limitations to the kind of jobs that former felons can apply for.

According to Gerald, ongoing studies indicate that around four dollars are returned to society for every dollar spent on educating incarcerated people, and that the rate of people being re-imprisoned is only around 7%, compared to “double digits” for state and national figures for those who didn’t receive such education. Other studies indicate that education does have an impact on the lives of those incarcerated, such as bringing up the individual’s sense of self-worth, as well as on society in general, and Gerald also brings up the rigor and methodology of the studies undertaken, which he notes can also be improved to come up with better solutions and implementation. He also notes that, for the correctional officers, there is an increased factor of safety, as there is a decrease in the number of those referred to such correctional methods as isolation when an educational program is implemented. 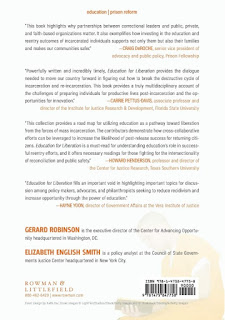 Gerald notes that the questions that also needs to be posed are “when,” “how” and “why,” because educational programs don’t result in 100% success, with some people still undertaking violent activity even while taking up an educational program. He notes that internal and external variables also come into play and notes that more can be done, pointing out a law that has affected federal prisons, whereas most prisoners aren’t in federal facilities. Gerald also remarks that the present conversation about the role of prisons in American society is moving away from punitive punishment towards rehabilitating those who are incarcerated. He also remarks that there should be more coordination so that those who have been released from prison should know where to go once they are released, and that those who help such individuals should be the ones to make the first move to ensure that former felons get the support they need.

Purchase from Amazon:  Education for Liberation: The Politics of Promise and Reform Inside and Beyond America’s Prisons by Gerald Robinson