Dr. Arun Singh on His Remarkable Journey as an Immigrant to Become One of America's Preeminent Cardiac Surgeons

In this interview, Arun Singh, M.D. talks to Alexander “The Engineer” Lim, host of AuthorStory by alvinwriter.com, about his book, Your Heart, My Hands: An Immigrant's Remarkable Journey to Become One of America's Preeminent Cardiac Surgeons.

“Every life matters, regardless or age, race, sex or religion. They all look the same underneath the drapes.” ~Arun Singh, M.D. 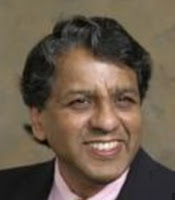 Dr. Arun Singh had no interest in becoming a doctor as a child, nor was he interested in becoming a surgeon while he was studying to become a doctor. He racks this up to having a rebellious nature, making him the kind of person who, when told he can’t do something, goes out and does it. He admits that he ran into a lot of trouble because of this behavior, but he would not have become the success he was without this attitude.

Dr. Arun admits that, as a child, he suffered from a lot of diseases, such as smallpox, chickenpox, malaria and hepatitis. When Dr. Arun was a six-year-old child, he broke his hand when he fell out of a tree after a monkey attacked him while both of them were reaching for the same guava. He and his mother needed to travel four hours and 150 miles to get medical help, and it still took two and a half years before he was able to use his hand again; and during that time, he was home schooled and thus missed out on those years of elementary schooling, as well as a lot of childhood activities. He did remember his father getting angry when the doctor said that the best they could expect was for Dr. Arun to be able to use his hand to feed himself, to which his father declared: “My son will be a doctor.”

Dr. Arun broke his hand again at age ten, while kite flying, which is a sport where the handler of one kite attempts to cut the strings of the kite of another handler. It was when his kite was cut, during a competition, that he fell into a ditch and injured his hand yet again. Dr. Arun remarks that there was no physical rehabilitation available, so his mother worked with an orthopedic surgeon so he could use his hand again, using bricks as weight resistance as well as hanging onto the protective rods of windows.

Dr. Arun admits that, because he was bored while he was out of school, and this led him into a lot of trouble, such as hopping on trains without buying tickets, go through back alleys and do everything a “bad kid” would do, except he didn’t pick pockets. Not surprisingly, when he got into high school, he had no friends and while he did pass high school he admits that he was still being a “bad kid.” He got into medical school at the age of 16 and couldn’t understand the lessons that were given. (He thought that that was because the other students were older than he was, but he would later find out, after he emigrated to the United States, that he was severely dyslexic.) Dr. Arun suffered from insomnia, so he used this to his advantage to read and re-read lessons over and over again until he got it.

Dr. Arun wound up at the bottom of the class after his first year of medical school, and it was then that his father suffered a massive stroke which would incapacitate him for the rest of his life. Dr. Arun was devastated, and the family lost their savings within weeks. It was while looking after his father that his mother told him: “I want you to grow up. I want you to take care of the family. You are the guardian of the family. Get up, look up and don’t give up.” Dr. Arun took on the challenge, as he admits he didn’t want to become a “beggar on the street” with a broken pan asking for change or food. He thus gave up sports and began looking after his family even as he went through medical school and graduated second out of 107 students at the age of 22.

Dr. Arun remarks that “nobody wants to leave their home,” but he knew that he wouldn’t be paid while he was being trained as a doctor, and money for the family was really short at that time, after which he wasn’t sure what kind of job he would have. He found an opportunity to go to the United States and train as a doctor in that country and be paid to boot. He spent almost all but twenty-five cents of the eight dollars he had in his pocket during the 36-hour flight from India to the United States for necessary expenses, and he remarks that, while he faced such challenges as racism, discrimination and feeling discouraged, he knew he could face up to whatever challenges would come his way.

One of the things that gave Dr. Arun culture shock was the difference between the state and nature of Indian and American hospitals. Dr. Arun remarks that Indian public hospitals aren’t the cleanest, describing an example of a putrid-smelling, twenty-foot square room holding 30 patients lying on metal cots in hundred-degree heat, with dogs running around along the walls as being an example of the kind of state in Indian public hospitals. Emergency rooms were in a similar state, with people coming in with, and dying from, malnutrition and infectious diseases, and this state of affairs was very different from those in American hospitals, where the hospitals were clean and people died from gunshot wounds.

Starting up his practice was also challenging for Dr. Arun, as he had to deal with his wife being ill and with the challenges of raising children, but he retained his focus. He admits that his wife and his mother were two of the greatest influences in his life, and he was “devastated” when his mother passed on in 2007, due to a heart attack, particularly as he couldn’t return immediately for her cremation and interment.

Dr. Arun notes that he might be perceived as unemotional, but that most surgeons follow the truism of: “Control your emotion, or emotion will control you.” He states that surgeons, when they perform surgeries, have “tunnel vision” to get the job done, but this doesn’t mean that they can’t be touched or affected. The reality, Dr. Arun notes, is that he didn’t save everyone he operated on, and that he carries the pain and burden of the loss of those he didn’t save. One such patient was a patient whom he first operated on while the latter was a baby, a mere few months old, and whom he operated on again at age seven. That patient died on the operating table, and Dr. Arun was so upset by that, that he and his wife decided to not have any more children after that. 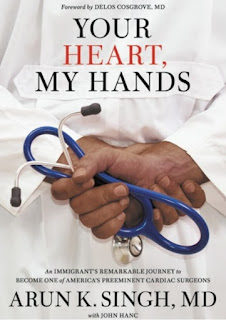 Dr. Arun remarks that the story in Your Heart, My Hands is an immigrant’s story as well as an American story, and that he isn’t the only one with this kind of story, one where, despite all challenges and failures, one can succeed and overcome whatever obstacles come one’s way if one is focused and works hard.

Purchase from Amazon: Your Heart, My Hands: An Immigrant's Remarkable Journey to Become One of America's Preeminent Cardiac Surgeons by Arun Singh, M.D.

Posted by alvinwriters at 7:24 PM