Isaac Prilleltensky on the Science Behind Laughter for Change, a Better Life, and Well-Being

In this interview, Isaac Prilleltensky talks to Alexander “The Engineer” Lim, host of AuthorStory by alvinwriter.com, about his The Laughing Guide book series written with Ora Prilleltensky.

Isaac Prilleltensky is presently the Vice-Provost for Institutional Culture at the University of Miami, and he took a sabbatical between assuming his present position and his previous position, the Dean of the School of Education and Human Development at the University of Miami, to write out the Laughing Guide series with his wife, Ora Prilleltensky. His involvement with, and use of, humor has evolved over the course of time, developing from when he was asked to write speeches for certain celebrations to when he began using humor in his own profession. He and his wife, began a humor-based online research project to help people become happier and healthier. It was then that he began writing funny short stories and began having these published in newspapers and magazines, and it was from then that the trilogy series developed.

The series combines humor with science and aims to enable people to have healthier and happier lives. The book sprang from Isaac’s realization that he most likely had enough original material for a book, which he and his wife (whom he refers to as his “secret weapon,” because of she not only is a psychologist - one whom Isaac admits is probably better than he is - but is also “super knowledgeable”) wrote out. The publisher who reviewed the initial book said that it needed to be split into two, which they did, and it was while they were working on the second book that Isaac realized that the second book was getting too big, so he split that book into two, resulting in the present trilogy. 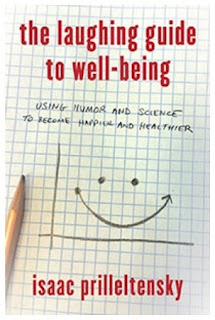 The books’ approach is a mix of humor and science, and Isaac points out that people learn better when they do so in an environment where humor is present, as they become more creative, their defenses are lowered and they solve problems better. Isaac points to the substantial body of research on positive emotions - which is what humor falls under - which indicates that positive emotions create a positive spiral of positivity. The lack of feeling defensive helps out, as people who are so involved don’t need to worry about coming across as inferior, thus freeing up mental energy; and the freer one feels, the smarter one becomes, creating connections amongst things that one would have not made in another environment. Laughter also releases endorphins, which means that humor links the psychological with the physiological.

Isaac also points out research which indicates that the best way to learn is to be open-minded - broadening one’s horizons - which requires one to suspend judgement on the way the world is, which removes one’s own biases and enables one to see things differently. He also notes research where humor can reduce the intensity of pain felt by individuals as well as their allergic reactions, as laughter boosts the immune system. He remarks on the active components which members and participants in laughing groups get, namely: 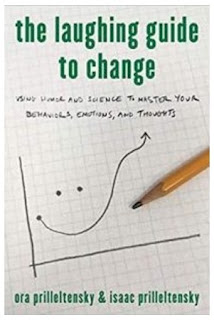 Change, Isaac remarks, isn’t always drastic, dramatic or traumatic, but can be doable, gradual and feasible. He advocates the “small win” strategy, where one breaks down one’s ultimate goal into small goals they can feel good about and which are achievable, and he notes that this is just one of several scientific-based methods for managing change. Another method is to anticipate barriers and create backup plans, as a way to implement what one intends, and gives an example in his life where he and his wife reduced their sugar and meat intake. As a summary, Isaac remarks that change is doable when it is done gradually, when barriers are anticipated, to reinforce new behaviors and to get social support from the people around oneself. “Change is a team effort,” he adds, and notes that change can be accomplished if it is demystified, so that it is doable, viable and gradual. 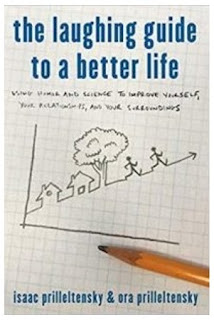 Isaac notes that humor is one tool for one to look at one’s present life, and that, if one can laugh at oneself, then that is the first step in changing oneself, so that one can then explore what is and what isn’t going well in one’s life. Creating a better life, Isaac says, starts with examining one’s life, one’s relationships and one’s surroundings, as the environment one lives in, and the people around oneself are vital to creating the better life one desires. “The environment, the people around us,” he notes, “can make us exceedingly happy or thoroughly miserable.”

Where the books are concerned, Isaac notes that these enable readers to explore various ways to lead happy and healthy lives, as there is no “one size fits all” when it comes to living a happy life, since different people have different desires. He also recommends that people become good listeners as, by doing so, one can create long-term positive relationships.

The Laughing Guide to Well-Being: Using Humor and Science to Become Happier and Healthier

The Laughing Guide to Change: Using Humor and Science to Master Your Behavior, Emotions, and Thoughts

The Laughing Guide to a Better Life: Using Humor and Science to Improve Yourself, Your Relationships and Your Surroundings