Thomas Moore on Our Lifelong Journey Towards Meaning and Joy

In this interview, Thomas Moore talks to Alexander “The Engineer” Lim, host of AuthorStory by alvinwriter.com about his book, Ageless Soul: The Lifelong Journey Towards Meaning and Joy.

“There is something very valuable about getting older.” ~Thomas Moore

Thomas didn’t think he would be a writer, when he was young, as he loved words, and was considering becoming a college professor before taking the path his life eventually took, and is presently writing about the things he likes to write about. Thomas wrote Ageless Soul, which sprang from his book Care of the Soul, which has become a “basic book” from which other books were written, and which he has written, as he is a senior, himself. Ageless Soul is about the inner details of ageing, which doesn’t happen only in old age, and Thomas notes that people who turn from their twenties to their thirties go through a passage in their life. He reframes the subject matter concerned in all of his books, and the process was no different with Ageless Soul, which enabled him to come to some interesting conclusions.

Thomas notes that fear is a natural part of life, but that people shouldn’t get overwhelmed by this and should, rather, acknowledge such fears, as fear and ageing are part of the human experience. He notes that, as people get older, the struggles that they worked with when they were younger get become more settled, and that people can then address the issues that concern their soul, as getting older becomes a better place to be. Thomas acknowledges the physical aspects of getting older and notes that the key is to not view oneself as a merely physical being, which is a materialistic outlook. Making the shift in looking at ourselves as having a spiritual aspect, according to him, helps one to realize that ageing isn’t so bad. Doing this enables one to slow down, become more contemplative and spend time to do nothing as well as to walk and get close to nature, which enables one to get in touch with one’s spirituality.

Thomas notes that “growing older” is different from “ageing and maturing,” giving examples of people who have died young but who have the kind of profound insight and knowledge that is more applicable to one who has lived and entire life and had matured. He notes that people who have grown older but who haven’t matured haven’t had the kind of life experiences necessary to do so and defines ageing as one taking life on, with all its invitations. Such involves change and taking risks, which is something not everyone does.

Thomas went over some of the stages of ageing, which are:


Thomas notes that adjusting to, and accepting, the process enables one to handle the transitions better and helps one live a full life in old age. He remarks that one needs to reflect to get in touch with one’s spiritual self to successfully live in one’s old age and gave such examples as reflecting and connecting with the spirit through art or poetry, without which ageing becomes a sudden shock.

Thomas remarks that the anger that comes out in old age, which could cause one to be considered cantankerous and chronically angry, come from past unsettled issues, which could come from when they were still children, and that this anger is triggered by the realization that the world is changing at a time when they had learned to become effective in the world. The anger also causes other people to become lonely and disconnected with others and the world at large. 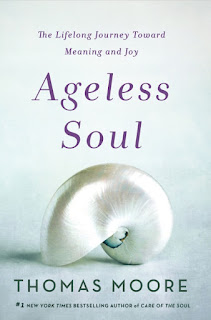 Thomas remarks that the experience of connecting with one’s spirituality in one’s old age differs from person to person, and that, in old age, one is looking for something more than just “going to church.” For him, being connected to nature and the arts are doorways that enable one to have a spiritual outlook on life, noting that, when one is retired, one has time to do so. Thomas also notes that, when one is old, one has something to give back, experiences reflected upon, which give the elderly something to say, which can make one a good mentor and which makes one’s life more meaningful. He also notes that youth and age have to remain together in one’s sense of self, which is possible, as well as to be around young people, as doing so enables one to remain flexible.

When interacting with others, Thomas remarks that how he comes across to others is more important than what he actually says to others, which makes others remark to Thomas that he seems younger than he actually is. That said, Thomas acknowledges that there are things he can no longer do physically, as well as that there are other things he can do, in ways where he shows that it is possible to grow older without surrendering to age.

Purchase from Amazon: Ageless Soul: The Lifelong Journey Towards Meaning and Joy by Thomas Moore

Posted by alvinwriters at 6:25 AM