Martha Howard, M.D. Reveals the Secret to Being Alive and Well

In this interview, Martha Howard, M.D., talks to Alexander “The Engineer” Lim, host of AuthorStory by alvinwriter.com about her book, Alive and Well: Your Survival Guide for the Health Care Apocalypse.

“I’d like to see the generation of my grandchildren be as healthy as the adults were when I was a kid in the 1940s.” ~Dr. Martha Howard

Throughout the years of practicing medicine and seeing so many unwell patients, Dr. Howard found herself wondering what happened to health care in the United States, particularly when she compared how healthy, energetic and slim people were when she was a child in the 1940s. According to her, one in three people in the United States is obese; six out of ten people have at least one chronic illness, and a sizeable proportion of these have more than one chronic illness. (Chronic illnesses, according to Dr. Howard, are due to vitamin and mineral deficiencies, and covers such things as allergies, arthritis, Alzheimer’s, high blood pressure, diabetes, heart disease, lung disease and pulmonary disease.) This made her think about what could be done about the present state, and her book, Alive and Well sprang from all the research she did.

Alive and Well is a “make it happen” book, according to Dr. Howard, and while around forty pages of the book are related to what she sees as what is wrong with the state of the health industry in the United States, the rest of the nearly four hundred pages are dedicated to her recommendations of what to do when one has particular health concerns. Her recommendations are based on 35 years of practice and thousands of patients and are ones which have worked.

Dr. Howard became interested in acupuncture when, after she got involved in a car accident, her neck was broken. She went to several doctors who suggested either living with it or taking painkillers, which she was reluctant to do. She then found an acupuncturist who, in three months’ time, fixed her neck, and after that, she apprenticed under the acupuncturist for two years. As she lived in Illinois, however, she couldn’t practice without a medical degree, which was why she went to medical school and got her medical degree at the age of forty-one. Dr. Howard uses “integrative medicine” in her practice, which means that she uses what she considers to be the best of Western and traditional Eastern medicine, those practices which work.

Dr. Howard points out that there are five major “Horsemen” or big market forces in the United States that keep people unhealthy. These Horsemen are: 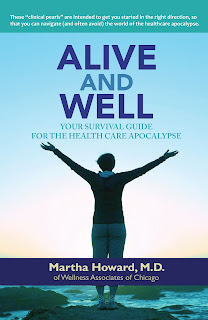 Dr. Howard notes that the diagnostic system is broken, and gave the example of a patient who goes to a doctor with a complaint, such as an irritated bowel. The doctor will then say that the patient does have the complaint he has and then give a drug without figuring out why the patient has that complaint in the first place. Dr. Howard opines that the “clockwork” way of viewing the human body, where healing one part will ensure that the entire mechanism keeps running well, is not appropriate, as the human body is an ecosystem which interacts not only among the various parts within it, but also with the environment around it. This is why she focuses on holistic healing, and gave the example of Dr. Bredesen, who is the director of the Alzheimer’s Disease program at the UCLA David Geffen School of Medicine, who undertook a study on treating patients with Alzheimer’s. Dr. Bredesen treated Alzheimer’s holistically, dealing with such aspects as food, sleep, dental hygiene and exercise, rather than just prescribing drugs, and six of the ten people in his study were able to return to work after being forced to leave it because of their condition. 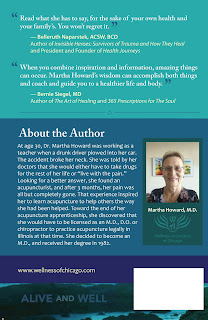 Dr. Howard believes that the biological systems of human beings are still geared to a hunter-gatherer diet, rather than one based on grains, as this was the kind of diet that humanity has lived on for most of its existence. She notes that she had good results with her patients when they undertook the “paleo” diet, which she claims is easy and simple. Where exercise is concerned, Dr. Howard notes that doing interval exercise, which speeds up and slows down one’s heart rate comfortably, is the best kind to do, with twelve to fifteen minutes of exercise, four times a week being sufficient.

In the end, Dr. Howard would like public health in the United States to turn around, and have future generations of children as healthy as children during the time when she was a child.

Purchase from Amazon: Alive and Well: Your Survival Guide for the Health Care Apocalypse by Dr. Martha Howard

Posted by alvinwriters at 7:22 PM