Onoso Imoagene Reveals How Second-Generation Nigerians Find Their Identity in the U.S. and Britain


Onoso Imoagene talks to Alexander “The Engineer” Lim, host of AuthorStory by alvinwriter.com about her book, Beyond Expectations: Second-Generation Nigerians in the United States and Britain.

“There is more that unites us than divides us.” ~Onoso Imoagene

Onoso is a Nigerian who emigrated to the United States in 2001, when she won the Diversity Visa Lottery Program and the green card that went with that. She went to the United Kingdom for about a year to pursue her studies, and got her Ph.D. in Sociology from Harvard. Beyond Expectations is about the adult children of Nigerian immigrants, and is intended to highlight how diverse the black population is in the United States and Great Britain, as those outside that population regard the black population as homogenous in nature. The book also covers the interplay of the various black groups amongst each other, and while the research was academic in nature it is readable to the average person.

Onoso admits that it took her around nine years to publish the book, and some of the impetus came from her realization that non-black researchers regarded certain groups of the black population, such as Caribbeans, as suitable substitutes for other groups of the black population, such as those from Africa. The true impetus came when she came across a study that compared how well white children and black immigrant children did, economically and socially, compared to their parents, which made Onoso think of seeing how well second-generation Nigerian immigrants did compared to their parents.

Nigeria, located in Africa, is the most populous black nation in the world, with 180 million people, and its best resources are petroleum. There are three major ethnic groups and over two hundred forty minority ethnic groups, each with their own languages, and to ensure commonality the official language is English. Onoso remarks that Nigerians who live in Nigeria identify more with their ethnic and religious group than with their nation, but Nigerians who emigrate subsequently identify with their nation more.

Onoso remarked that first-generation Nigerian immigrants (on which she is doing research) face the challenge of what it is to be regarded as a “black person,” with the discrimination attendant to such a label thereof. She noted that everyone from where the immigrants come from come is black, which is why they refer to each other in terms of ethnic membership, and culture shock is likewise a challenge they face.

With regard to second-generation Nigerians, Onoso notes that these “choose ethnicity while negotiating race,” which means that they hold a Nigerian-centered identity and values while realizing that they aren’t as competent in the mother language or as steeped in the cultural practices of their parents. Second-generation Nigerians are thus “ethnic hybrids” who borrow from the cultures they have inherited and now live in, but as they are integrated into the societies their parents emigrated to, this is more of a choice rather than a resistance to the culture and society of the land they were born in. They also don’t tend to distance themselves from others of African descent, but they do face the challenge of being discriminated against because they are black. 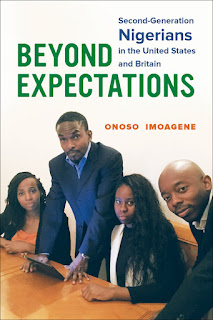 Purchase from Amazon: Beyond Expectations: Second-Generation Nigerians in the United States and Britain by Onoso Imoagene

Posted by alvinwriters at 6:29 PM